Val Kalende, a popular Ugandan LGBT activist, has declared on national TV that she is no longer a lesbian and is withdrawing from further involvement in LGBT activism.

Her statement came during a Prayer Crusade hosted by Pastor Buggingo at Canaan Land in Uganda. 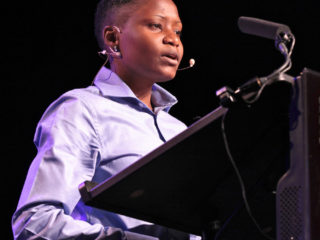 Kalende is widely known for her LGBT advocacy work both within and outside Uganda. Various international and local publications such as Huffington Post, Newsweek, and Daily Monitor, to name a few, have written about her life and work.

Kalende, who identified as lesbian since 2002, was in a committed relationship with her partner up until when threats forced her partner to flee the country. Since then, she has been very open and public about her life and work.

In 2005, she started working with Freedom and Roam Uganda, an LGBT rights organization in Uganda.

Reasons for her sudden public denunciation of her sexual orientation and her intended departure from LGBT activism still remain sketchy, but rumors have it that her actions might have been prompted by some disagreements with fellow activists in Uganda who threatened to cause her harm.

Mirakel Rakkaus Hossy, a Uganda-based human rights activist and acquaintance of Kalende, blamed her decision on the lack of unity amongst LGBT activists in Uganda.

He wrote in response to an online allegation that Kalende is a fraud:

“Us who got the opportunity to know Val, we can’t say she was fraud. We even know some of the girls she dated. There is so much hate within the Ugandan LGBTI community, the infighting, And fellow activists saying lies about one another . We cannot ignore all these things. May be this also led her to leave the community that she loved so much and, if you listen to the whole interview, she says she was being threatened by fellow activists. If you don’t know her there is so much information about her work that you can find on the internet . The late David [Kato] and her are some of the people who did so much and risked their own life for the community. Maybe we need to find out what caused this rather than blaming her. Let us also address the hate within the community itself.”

Since the circulation of the video, no organization in Uganda has given a public statement on the issue.

Indeed Kalende has been a strong voice to reckon with when it comes to LGBT activism in Uganda, and her latest utterances are sure to come as a huge shock to many who have had the privilege of working with her during her activism days. 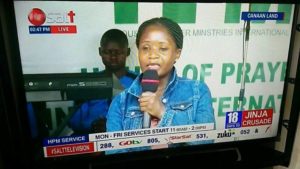 Her “conversion” from being a lesbian, if true, would contradict the general knowledge than sexual orientation is inbred from birth, rather than a choice.  However, if she were born bisexual, she could easily switch her emphasis from same-sex attraction to opposite-sex attraction, which is more likely what has occurred in her case.

Unfortunately, her statement will likely be used by Christian fundamentalists to claim that sexual orientation is a choice and that anti-gay “conversion therapy” is a valid option rather than a trauma-producing sham.

Here is a transcript of what she said in the video, which you can watch below. The transcript, compiled by the Most At Risk Populations Society in Uganda, is an English translation of Kalende’s statement, which is in the Luganda language:

“I am a graduate of Makerere University School of Journalism. After graduating I worked for the Daily Monitor with the Society features and entertainment. Around that time was also the era of LGBTIQQ movement building in Uganda (the group known colloquially as “abasiyazi” in Luganda).

One thing that astounds me is how the evil one plays with our life. My mother was a staunch Christian. I was brought up by Bible-carrying Christians. I consider myself a staunch Christian too. We were well off. In the 80’s when the Pentecostal Church gained roots in Kampala Capital City Authority, fellowships were a popular way of joining in prayers to give glory to God. We used to hold fellowships at our home grounds.

I am not surprised this change has come over me. My family still prays fervently. I am sure they have kept on praying for me to change. This is a work of God. Not my own doing.

I was the black sheep of the family. My family was angry with me for being a lesbian. My uncles, aunties, cousins, nephews and many friends had rejected and disowned me.

I was orphaned around 16-17 years old. Both of my parents passed away due to HIV/AIDS before the time when ARVs were discovered. My mother passed away later after my father. I was seconded to another home. It is at this home where I got introduced to same-sex sexual intercourse.

I did so well in school and was admitted to one of the best girls’ college in Uganda. I joined St. Joseph Nsambya and while there met many girls who practiced same-sex sexual intercourse.

I met and made many friends and I knew or was part of the lesbian rings. But, I am surprised almost all of them are married, have thriving happy families and grown up children. Yet, here I am still under that burden of being a lesbian. The girl who I could call my first cut at 17 years is happily married and has a family. All I got out of being a lesbian is being a rebellious child.”

Whatever led Val Kalende to that path, it is something that the Ugandam LGBTI movement has to explore, study, appreciate, accept and deal with in a sober and well-guided way.

The fact is I heard you in the video, unfortunately am not in the position to judge. However, the biggest fact is: You are a hero and your work for the movement cannot be denied or scrapped. You will be missed.
Above all you are loved.