In a groundbreaking solo show, Botswana-based dancer Lesh Maseng broke open the taboo on public representations of queer sexuality. He also brought a few steps closer the day when LGBT Africans can all express themselves honestly, says author John McAllister.

Blood, symbolizing the wounds, physical and emotional, of queer Africans, and the boxes that people, queer and straight, put themselves and others in, are the main visual motifs of Lesh Maseng’s radical dance piece G.A.Y. (Photo courtesy of Endotica.org)

One chilly evening in July, the weekend crowd at Botswana’s premier live performance space, Maitisong, saw two things no audience in this out-of-the-way southern African country had ever seen before—a naked man on stage and, more important, a “nakedly” open and honest portrayal of what it’s like to be a queer artist in a conservative African society.

With his groundbreaking solo show G.A.Y., Gaborone-based dancer and choreographer Lesh Maseng has not just added a unique new work to the African contemporary dance repertoire, but by breaking the taboo on open, public representations of queer sexuality, he has also brought the day a few steps closer when LGBT Africans can all express themselves honestly.

It’s no accident that this pioneering show happened in Botswana. On a continent with a reputation for extreme homophobia and systematic state repression of its queer citizens, Botswana -— a diamond-rich, politically stable democracy -— is something of a haven. Like 33 other African countries, it still has a colonial sodomy statute that criminalizes sex “against the order of nature,” but the law has not been enforced since the late 1990s, and in Botswana’s capital, Gaborone, the only city of any real size in the country, many LGBTQ people live relatively freely. There are gay-friendly bars, restaurants, and nightclubs and lively, if secretive, social networks that reach to the highest echelons of business and politics.

“Batswana” is the preferred term for the people of Botswana (shown in red on the map of Africa). One individual is a “Motswana” and things relating to Botswana are “Setswana” (which is also the name of the national language).

In private, however, most straight Batswana [See explanation of “Batswana” and “Setswana” at right.] still take a dim view of alternative sexualities and gender identities. But Setswana culture prizes discretion and privacy very highly. Few things are more important in Botswana than minding your own business, especially when it comes to other people’s sexual and family lives, so queer Batswana have usually been able to live (and love) safely as long as they didn’t “flaunt” their sexuality. 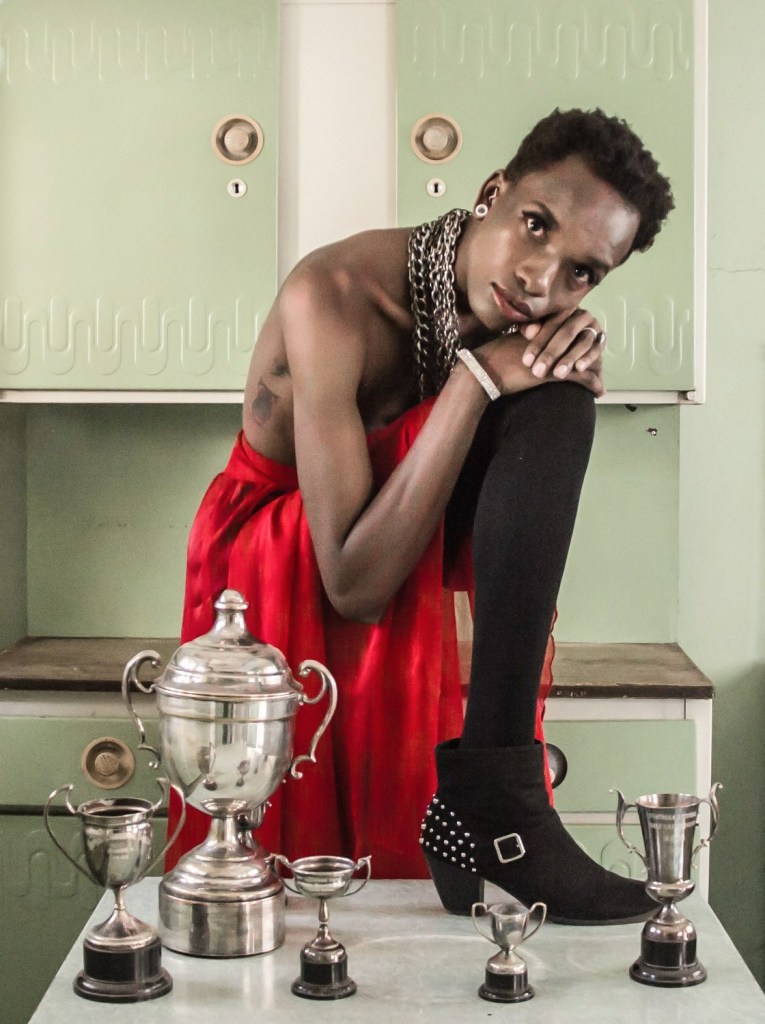 In LGBT cultural activism, Botswana has been an innovator. Batho ba Lorato, the first queer film festival in Africa outside South Africa, celebrated its fifth anniversary earlier this year. And in live theatre, trans poet Kat Kol-Kes, who had been studying in the UK on a Chevening scholarship, is now back in the country and busy rebooting her Queer Shorts theatre festival after a two-year hiatus.

But dance, that queerest of art forms, had been strangely neglected by Botswana’s LGBT activists.

Until, that is, a nude Lesh Maseng stepped onto the Maitisong stage [in July] in front of what must have been -— despite the upfront title of the show -— a very startled audience.

No one, after all, had ever seen a naked man on stage in Botswana before.

The show’s title, apart from the obvious reference to sexuality, actually stands for “Give All Yourself,” which is exactly what Lesh set out to do. But the nudity at the opening of the piece spoke to something deeper, as Lesh tells me after the show:

“Give yourself means giving my all to the audience, as a queer dancer and artist. Starting out naked is just a way of making that point in the most dramatic way possible. This is a piece, like the poster for the show says, about my life as a queer dancer in Botswana. It’s about the audience knowing everything I can tell them about who I am and what I’ve been through. So I need them to know me in the simplest way, as a naked body, from the moment I walk on stage. Having shown them everything about me on the surface, I then use different costumes and dances to show them deeper things, my thoughts and feelings and experiences as a queer artist growing up and figuring out how to live and express myself honestly in a place that denies who I am.”

There is a paradox here that Lesh is aware of and uses as part of his artistic strategy. “It’s a Catch 22,” he explains, “in the sense that I don’t want the audience to body-shame me, call me names, or judge me, but at the same time, I rely on their judging me, prejudging me really, to deliver the message that I’m giving them my all and that my self-exposure has a larger meaning.”

In this way, the nudity also relates to the broader message of the show -— that the emancipation of queer Africans calls for the same kind of openness and honesty from the queer community. Only by making themselves visible, putting themselves “out there,” G.A.Y. suggests, will LGBT Botswana win the recognition and respect they are entitled to. In a culture where social cohesion and belonging matter more than anything else, they have to be recognized and respected to live freely and with dignity.

But Lesh is not trying to say that there is only one way to promote queer emancipation in Botswana or Africa in general. On his social media profiles, he calls himself an artivist, but when I ask him to define artivism, he refuses:

“Artivism was just a word I thought would summarize who I am as an activist and a dancer, but in creating G.A.Y., I discovered that words can’t really explain an individual. It’s actions that matter. So now I shouldn’t say I’m either an activist or a performer. Its either we just talk about doing, or we do!”

On dance as a way of getting the message on queer rights across to the LGBT community and the larger community, Lesh is even less willing to generalize:

“I can’t talk on other people’s choice of activism. Only mine. Dance is all I’ve known, and it’s what I love doing and do best, so I’m applying dance to the cause of the forgotten minority in Botswana that I am part of.”

Blood, symbolizing the wounds, physical and emotional, of queer Africans, and the boxes that people, queer and straight, put themselves and others in, are the main visual motifs of Lesh Maseng’s radical dance piece G.A.Y.

The power of G.A.Y., both as social commentary and as choreographic art, comes from this honest, personal commitment. The structure of the piece is simply the story of Lesh’s development as a dancer:

“The structure is just my life in different stages. I was never an outgoing person. Ever since I started dance at 16 [he is now 27], it was school-dance -sleep-repeat. So in G.A.Y, I start off with a nude segment to display my vulnerability as a baby dancer and as a gayby discovering myself. Then the piece goes on to Latin, jazz, and showdance (which were the stages of me discovering dance, growing as a dancer and choreographer, in a queer yet homophobic space). I close with a voguing segment mixed with other pop genres. This shows me trying to identify myself within the queer community, find my place there—because my community can be homophobic and bullying too—while also trying to come out honestly, as myself and as a queer man, to the straight community.”

The impact of a dance performance depends on the skills of the dancer(s), and G.A.Y.’s structure is well designed to show off Lesh’s dance chops. It does this with verve and panache—and some simple but effective stage management by Lesh’s friends.

Yet Lesh is realistic about the impact of a single show. “G.A.Y.,” he says with a smile, “is meant to convince people it’s okay to be gay. But even after being involved with the show, some of my friends still can’t say ‘gay’.”

The Maitisong show was the first time G.A.Y. has been performed, and it is still a work in progress. Lesh is understandably cagey about his plans for the piece.

“I do have a vision for the show,” he says, “but I’d like to keep it under wraps. For now I can just say I’ll be performing this show for at least the next two years. I want to perfect it and spread the message as widely as possible.”

Next stop for G.A.Y. -— Kat Kol-Kes’s Queer Shorts Festival in October. After that, who knows?

One thing seems certain. With Lesh’s skills and commitment, this groundbreaking show is sure to go from strength to strength and have a major impact on queer dance activism in Botswana.

This article previously appeared in Endotica. It is reprinted with the author’s permission.