Botswana and Kenya will be the next two countries to overturn their anti-gay laws, if court challenges there succeed. 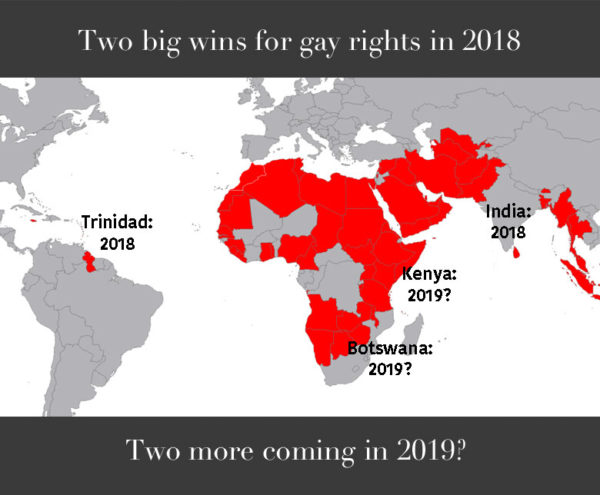 India and Trinidad overturned their anti-gay laws this year. Kenya and Botswana might do the same next year.

The Botswana High Court last week scheduled a hearing for March 15, 2019, on the constitutionality of Botswana’s laws that make same-sex intimacy a crime.

Previously, the Kenyan High Court in Nairobi set Feb. 22, 2019, as the date when it will announce whether it will overturn the law condemning people convicted of consensual gay sex to as much as 14 years in prison.

The challenge in Botswana was filed by a gay man identified only as LM, who is supported by the local LGBT rights group Legabibo.

Legabibo said it will submit information to the court on how the anti-gay law affects LGBT residents, “including how it limits their ability to access basic services and infringes on their human dignity.”

Similar constitutional challenges confront the anti-gay laws of Barbados, Jamaica, Lebanon, Malawi, and Singapore. Other challenges to anti-gay laws are reportedly in the works in Cameroon, Morocco, and Tunisia.

Trinidad’s High Court ruled in April that that nation’s anti-gay law was unconstitutional.

India’s Supreme Court made a similar ruling in September.

The north-central African nation of Chad, however, has been heading in the other direction. In August 2017, it enacted a law providing for prison sentences of three months to two years for same-sex intimacy.

The actions in India, Trinidad and Chad brought the number of countries with laws against homosexual or lesbian sexual activity to 74. In general, that number has been dropping year by year.

Successful challenges in Botswana and Kenya would reduce to 72 the worldwide number of countries with anti-homosexuality laws. The tally is down from 92 countries with such laws back in 2006.