LGBT refugees protesting dangerous and inhumane conditions at Kakuma refugee camp in Kenya were attacked yesterday by armed men at the UN Refugee Agency compound, allegedly while Kenyan police and U.N. guards looked on or even joined in the attack. 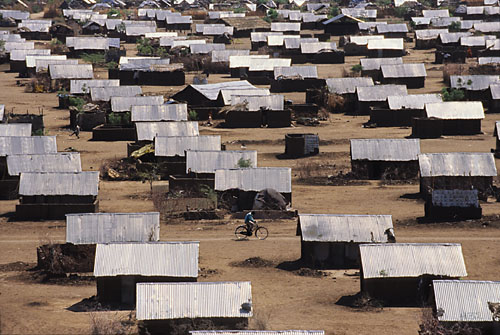 The number of people injured was unclear. According to Gay Star News, about 30 LGBT refugees were injured in the attack. But a member of the Refugee Flag Kakuma advocacy group told Pink News that “several” LGBT+ activists were injured.

The attack attracted international attention. In the United States, Eleanor Holmes Norton, the delegate to Congress from Washington, D.C., wrote to the U.N. High Commissioner on Refugees requesting an investigation into the conditions facing Ugandan LGBT refugees at the camp. She stated:

“I understand that Ugandan refugees regularly face assault, theft and worse, including by police, because of their status… I have been informed that the conditions in [UNHCR’s Kakuma Refugee Camp] are also inexcusably appalling, with many LGBT refugees again facing antagonism stemming from intolerance there. I request that you respond in writing within 30 days of the date of this letter addressing these ongoing issues and how UNHCR will work to improve the conditions of LGBT refugees in Kenya.”

Kakuma Camp houses around 185,000 people, most of them refugees who fled war-plagued South Sudan, but also refugees from Uganda, Somalia, the Democratic Republic of Congo, Ethiopia, Burundi and Sudan. Two hundred or more of the Kakuma Camp residents are LGBT refugees who escaped from anti-gay violence in neighboring Uganda.

Warning to LGBTI refugees at Kakuma Camp in Kenya in June 2018 contained this death threat: “If you don’t leave the camp, we are going to kill you one by one.” (Photo courtesy of Rainbow Flag Kakuma)

Many of the LGBT refugees live in their own section of the camp. There they are targets of scorn and violence from other refugees. Against those odds, earlier this year they organized a Pride celebration. That event boosted LGBT refugees’ spirits but also produced death threats.

To make matters worse, in the past year, some pleas for support from LGBT refugees’ leaders have been countered by accusations that some of the reported violence was fabricated and that contributions had been diverted to private use. Some would-be supporters investigated the claims of fraud and decided that it was impossible to determine who was telling the truth.

Below is an edited account of yesterday’s incident, excerpted from the O-blog-dee blog, published by Melanie Nathan, executive director of the African Human Rights Coalition. The photos below were provided by the refugees. Not all are from this week.

Thirty LGBTI Refugees in Kakuma Camp, Kenya, mostly Ugandans, participated in a sanctioned peaceful demonstration. As they tried to deliver a document to the office of the [U.N. High Commissioner on Refugees (UNHCR)], they were refused entry to the compound. When they returned some time later, they report being viciously attacked by police who were apparently called by UNHCR staff. I have reached out to UNHCR for comment and will update accordingly.

The conditions for LGBTQ refugees in the Kakuma Camp Kenya are deplorable and have become virtually unlivable. There have been constant complaints of extreme hardship and reflecting insecurities, flowing from threats to the physical safety of refugees, even while under UNHCR protection. Through my work at African Human Rights Coalition, I have been advocating for LGBT refugees in the camp for the past several years and watched the situation become increasingly dire, with frustrations building and hope for safety and resettlement dwindling by many who have been there for some years. As in the past these circumstances can boil over. The resulting protest was intended to convey a series of complaints to UNHCR with requests for improvement to safety, general well-being and security.

Today 30 refugees, who had received permission to hold a peaceful protest at the UNHCR compound, were attacked and all apparently injured. While we still wait to hear UNHCR’s version of what occurred, I am providing a direct account from a refugee who was present. [With some corrections and explanations by Nathan, and others added by this blog.]

Early in the morning [sexual minority members] gathered at the UNHCR to submit their petition at 7:00am, we went marching peacefully to the office. UNHCR guards refused us by pushing and threatening me and [name withheld in the original account]. We went back to where the guards had told us to stay and we told the guards that within one hour we will come back if they don’t come to pick up our document.

An hour elapsed. We returned. This time they brought Kenya police — eight men with guns. A man with an AK47 said, “I will kill you.” We replied, “Kill us. We are tired of this land.” Immediately the police gathered natives.

The natives started to break sticks and gather stones. They rained stones down on everybody’s head, which made everyone scatter and run to save their lives. The only shield we had was to get into the UNHCR compound. …

One policeman came and asked us to leave. He made a call to other Kenyan police. They arrived at the UNHCR compound and told the beaten gays and transgender to get out.

We said, “They are going to kill us.” They made a circle around us, and they started beating everybody with bars, wooden huge sticks, barbed wire and metallic poles plus pulling the guys’ penis and balls, saying we have a lot of pussy here why do you go for men.

A transgender was pierced with wood in the ass and in the leg. All this went on went when the UNHCR officials were watching. [Eventually] they told the police to drop [injured protesters at] the hospital. Our phones were taken. When we reached the hospital, still no proper medication was given. We just carried ourselves slowly up to the place we stay. People are in critical condition and they still need medication and food.

We where beaten inside the UNHCR compound in presence of the UNHCR protection team.

All the phones of refugees were confiscated. Phones are lifelines and hold the small amounts of money these refugees need to sustain their rationed food.

We will update as we hear more.