Uganda faces ‘a crisis of political will’ in fight against AIDS

Health rights advocates in Uganda warn that the country is “faltering in its response to the HIV epidemic” especially among LGBTI people, sex workers and drug users.

On the opening day of the Joint AIDS Review conference at the Hotel Africana in Kampala, Uganda, Hon. Dr. Chris Baryomunsi, representing the prime minister, praised conference organizers for emphasizing the importance of youth in combatting HIV.

In a joint statement issued Wednesday in Kampala at the start of the country’s 12th annual Joint AIDS Review Conference, health rights defenders said Uganda “is currently facing a crisis of political will” to end the epidemic.

Among the problems they pointed out:

“With more than 1,000 new HIV infections every week, and 1.3 million people nationwide who are HIV-positive, the government of Uganda and all funders engaged in the HIV response must wake up and stop neglecting the medical, human rights, and policy interventions that will ensure we achieve our target of defeating HIV as an epidemic by 2030,” a joint statement read in part.

The activists said that, while they acknowledge progress has been made since the dark days of 2012, when the Uganda AIDS Indicator Survey showed an alarming increase in HIV prevalence and incidence, the country is currently facing a crisis of political will.

This is the joint statement in full:.

1. HIV criminalization is killing our response—we cannot incarcerate our way out of the AIDS epidemic.

In 2014, civil society fought back against the National HIV/AIDS Prevention and Control Act’s criminalization of HIV. Nevertheless it was signed into law—despite flying in the face of evidence and best practice. Now the enforcement of this Act is creating serious damage in our communities. Evidence shows that criminalization intensifies stigma and disproportionately affects the most vulnerable—particularly HIV positive women.

What must change? Civil society groups call on the Attorney General to stop enforcement of these provisions immediately and to urgently work with the Law Reform Commission to explore scrapping these harmful clauses. Likewise, laws and policies on the horizon such as the Sexual Offences Bill would intensify criminalization and must be revised.

2. Prioritizing funding for communities to help HIV positive people stay on treatment with suppressed viral load—for life—must be the centerpiece of Uganda’s epidemic response. Populations with high rates of unsuppressed viral load, such as adolescents, pediatrics, and key populations must be prioritized.

Uganda’s rates of viral load suppression and retention on treatment show serious weaknesses in in the HIV response. People living with HIV must enjoy the right to the full benefit of HIV treatment—and a long life, free of debilitating side effects.

What must change? All providers of treatment must invest in sufficient numbers of adequately remunerated, trained and supervised Community Health Workers (CHWs) who provide caring and supportive interventions to ensure people are able to take their medicine and attend clinic. People with HIV in particular must be supported as CHWs on the front lines of an effective response. All people with HIV must have access to interventions such as community drug distribution points, fast track clinic lines for drug refills, and adherence support clubs. The major HIV funder, the US government’s President’s Emergency Plan for AIDS Relief (PEPFAR) must require all of its implementing partners to deliver a core package of adherence support services as a Standard Operating Procedure (SOP).

3. Talk is cheap—where is the money to end AIDS? Government has for years claimed commitment to the National AIDS Trust Fund (NATF), but currently operationalization of the NATF is stuck in Parliament, with the Ministry of Finance, Planning and Economic Development (MoFPED) and the Ministry of Health raising objections to it.

What must change? The NATF is not a panacea—the health sector beyond HIV also requires major funding increases. But if invested in priority areas that can be tracked by external watchdogs, such as medicines and other commodities, the NATF can achieve real impact. Government must stop sabotaging its own policies and operationalize the NATF immediately. 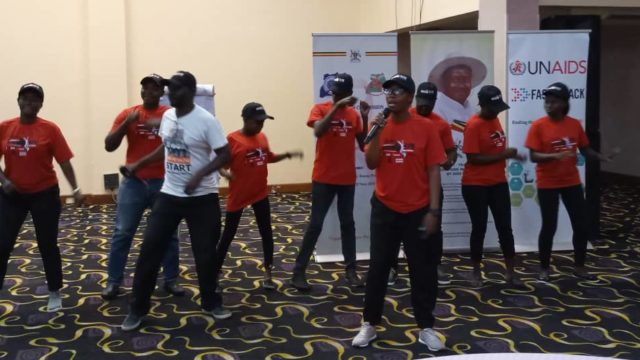 The Stigmaless band, composed of children born and living with HIV, performed during the conferences opening ceremonies.

4. Routine stigma, discrimination and criminalization of key populations (men who have sex with men, sex workers, people who use drugs and transgender people) must stop. Reaching key populations in Uganda with effective services is undermined by their routine exclusion from effective health services. As a result, they face much higher rates of HIV infection than the general population, with lower HIV treatment coverage.

What must change? HIV service delivery must be designed and implemented by key populations themselves, in order to ensure quality, stigma free prevention and treatment is widely and freely available. Government must openly support stigma free service provision for key populations. Criminalization drives communities from services and must be scrapped.

5. Pre-exposure prophylaxis (PrEP) must be offered nationwide, at all clinics—the ‘phased roll out’ of PrEP be transformed into a national program.Phased roll-outs for PrEP are not appropriate given the extremely high unmet need for effective prevention services across the country.

What must change? Government should commit to a national PrEP program as part of a comprehensive, decentralized combination HIV prevention package—even if all clinics can’t immediately offer PrEP, health workers across the country should be educating people about PrEP and referring people appropriately. Clinic staff should be talking about PrEP, as they would talk about other HIV prevention interventions such as condoms and voluntary medical male circumcision.

6. Adolescents are suffering without SRHR [Sexual and Reproductive Health and Rights] services and information — particularly for girls and young women, whose extremely high rates of teenage pregnancy, sexual violence, and HIV infection reveal massive failings in the HIV response.

What must change? Fast-track review and rollout of the school health policy, national adolescent health policy, adolescent health policy guidelines and service standards and comprehensive sexuality education framework.Ensure these policies are consistent with the latest scientific evidence and human rights and are implemented urgently. Scale up investments in effective HIV prevention, treatment and SRHR services for young people.

7. Continued stock-outs of commodities such as HIV testing kits and medicines for opportunistic infections are unacceptable and are undermining the response.

What must change? Commodities funding must increase, along with real-time community-led tracking of commodities access to raise the alarm when the threat of stock-outs looms.