Lawyers cannot travel during Uganda’s Covid-19 lockdown, so legal help is currently unavailable for 20 members of the LGBT community sent back to prison today to await trial in late April on charges of enabling the spread of Covid-19 by living together in an LGBT homeless shelter. 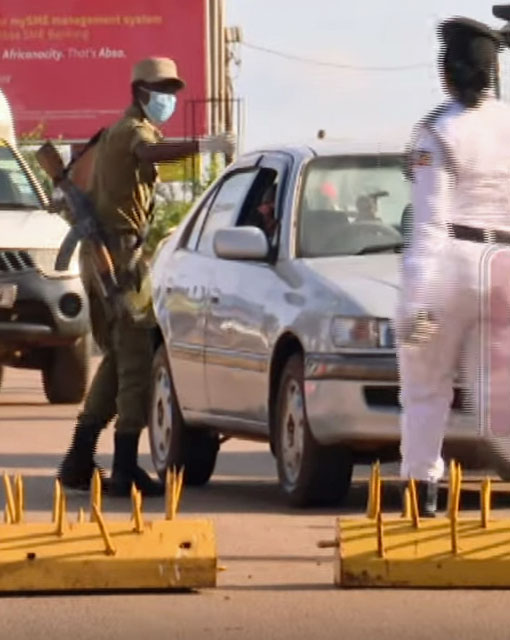 Roadblock in Kampala enforces the lockdown that seeks to halt the spread of Covid-19. (Photo courtesy of NTV)

Of 23 people who were arrested on March 29 at the Cosf shelter, three reportedly were released on police bond — two for medical reasons and a nurse who was providing medical care at the shelter.

The other 20 defendants were produced today before a magistrate at Nsangi Magistrate Court and remanded to Kabasanda Prison until April 29.

Most courts are closed as a countrywide anti-Covid-19 lockdown measure. The lawyers for the accused cannot move about because all public transport and private cars are banned from moving in order to combat Covid-19.

Ms Patricia Kimera, a lawyer with LGBT advocacy organisation Human Rights Awareness and Promotion Forum (HRAPF), said Tuesday in Kampala that “there is nothing we can do in the current situation.”

“We were almost being arrested we ourselves as lawyers. We found many roadblocks on the road when we tried going to Kabasanda Prison,” she said.

Cosf shelter residents were paraded before the media at the police station after their arrest on March 29. (Uganda Police Force photo)

When the 20 defendants appeared in court, no independent observers could describe the conditions under which they were being held.

Furthermore, in court the charges were read in English and were not translated for them, as is required, in a language they could understand.

Dr Adrian Jjuuko, the executive director of HRAPF Uganda, tweeted: “Lawyers should be allowed to move as part of essential services since the police carrying out arrests and using force in a bid to enforce the lockdown. The right to legal representation should not be violated as it is part of the non-derogable right to a fair trial.”

He added: “Uganda Police promised not to arrest people for minor offenses but 2 days ago they arrested marginalized people staying in a house, which is what they advise us to do! They have now added [20] persons to the overcrowded prisons, which makes no sense in the COVID-19 fight.”

Uganda’s Covid-19 lockdown rules were issued March 24 by health minister Dr. Jane Ruth Aceng, under the provisions of the 1935 Uganda Public Health Act. The regulations call for prison sentences of up to two months for people who organize prohibited gatherings or help people escape from quarantine. The regulations also provide for mandatory quarantine for people infected with Covid-19.

About the arrested LGBT community members 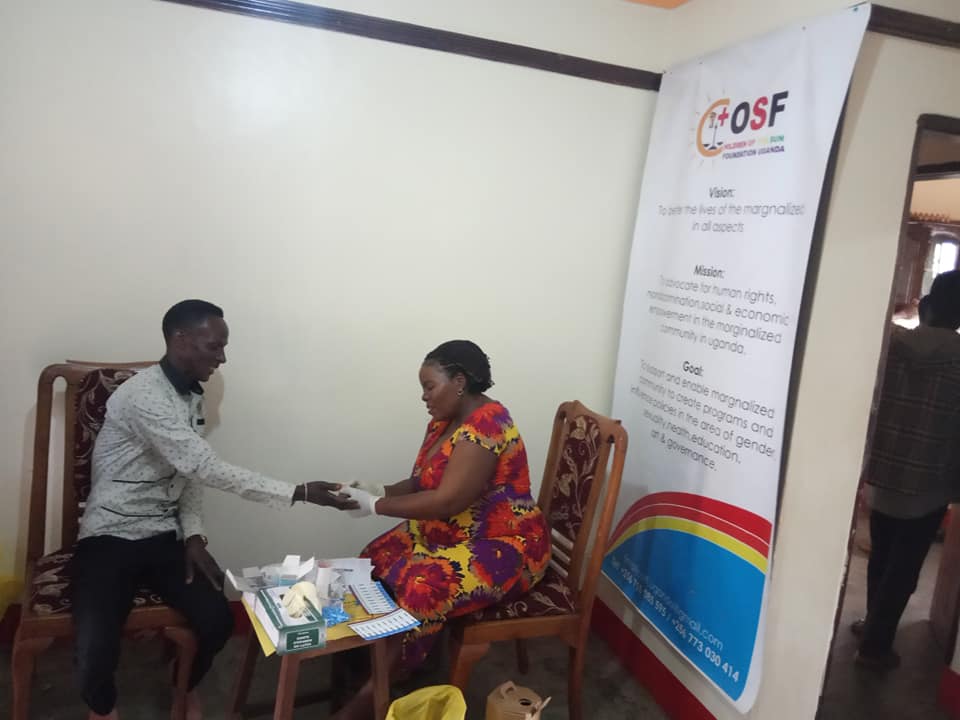 The March 29 raid by police and army targeted the shelter of Children of the Sun Foundation Uganda (Cosf Uganda), a local LGBT organisation on the outskirts of the Ugandan capital, Kampala. The LGBT community members were beaten and forced to take a “walk of shame” through the village from their shelter to Nkokonjeru Police Post in Kyengera town council, about 20 minutes’ drive from Kampala City.

Villagers accused the shelter residents of homosexual acts. Police later issued a statement stating that the assembly of adult males with no known kinship linkages and their unusual home environment indicate that they could have been engaging in some criminal activities, a matter that police are investigating.

It is currently a rainy season for planting crops in Uganda. Even though Ugandan President Yoweri Museveni directed security agencies not to arrest people on petty offences, some unscrupulous judicial and prison officials conspire with security agencies to arrest unsuspecting young people in order to put them to work for free on their private farms for planting crops.

HRAPF issued this statement about the arrests and the treatment of lawyers:

On the morning of 29th March, a shelter for LGBT youth operated by Children of the Sun Foundations (COSF) was raided by residents, and security forces. 23 people found at the shelter were arrested. Two of the 23 were beaten upon arrest, and all the rest were subjected to taunts from the community due to their perceived sexual orientation. They were formally charged with doing ‘a negligent act likely to spread infection of disease’ and ‘disobedience of lawful orders’ contrary to Sections 171 and 117 of the Penal Code Act respectively. On Tuesday 31st April 2020, 20 of those arrested were arraigned before the Chief Magistrates Court of Nsangi and remanded to Kabasanda Prison in Mpigi District until 29th April 2020.

On Sunday the 29th of March 2020 at about 11am, HRAPF received a call from the Executive Director of Children of COSF requesting HRAPF to respond to a raid by security officials and community leaders at their shelter located in Kyengera, Wakiso district. The HRAPF team composed of a lawyer and Community Paralegal went to the shelter but found that 23 persons had been arrested and taken to Nkokonjeru Police Post. There was one Local Defence Unit member who informed the two that he had instructions to arrest anyone who came to the shelter, and as such he put the lawyer and Community Paralegal under formal arrest. After about one hour, the two were also taken to Nkokonjeru Police Post, where the Officer in Charge released them since the he knew them to be HRAPF lawyers.

At the station, they met their clients who had been arrested. Information gathered shows that the community members in the area and the leadership were worried about the ‘homosexual’ behavior of the youths who they believed to be a bad influence in the area. They involved the Mayor of Nsangi Municipality, Hajj Abdul Kiyimba who stated that such behavior could not be tolerated in the area. He led the team that raided the shelter, assisted by members of the Local Defence Unit and the Uganda Peoples Defence Forces (UPDF). The mayor personally beat up at least two of those arrested as he questioned them about their homosexuality.

After being questioned, the group was detained at Nkokonjeru Police Post. While at the station, a crowd continued to gather, some of whom even threatened the HRAPF lawyers. A search was conducted in the shelter in order to find evidence of ‘homosexuality.’ Some of the items recovered and kept as evidence included several bottles of an Anti-Retroviral Drug regimen commonly used as Pre-Exposure Prophylaxis, two oral HIV self-testing kits, several condoms in their foil packs and several pieces of condoms that the residents in the shelter had blown up.

The total number of persons arrested was 23. These included a nurse from the COSF community clinic and the Executive Director of COSF. The others were all residents of the shelter. The shelter housed homeless LGBT youths. Among those arrested, three were released on police bond, one of whom was the nurse and the other two for medical reasons.

Statements were taken from the arrested persons. The Police first considered charging them with having carnal knowledge against the order of nature under section 145 of the Penal Code, but this was later changed to doing ‘a negligent act likely to spread infection of disease’ contrary to Section 171 of the Penal Code Act, and ‘disobedience of lawful orders’ under section 117 of the Penal Code Act. This was in the context of the Presidential Directives on COVID-19 which incidentally require people to stay indoors, the exact thing that the people at the shelter were doing.

The 20 were arraigned before the Chief Magistrates Court of Nsangi and remanded to Kabasanda Prison until 29th April 2020, when they will appear back in Court.

Article 23(1) of the Constitution, the right to liberty can only be limited in the case of a few exceptions including ‘for the purpose of bringing that person before a court in execution of an order of a court or upon reasonable suspicion that the person has committed or is about to commit a criminal offence’. In this case, the arrested persons were suspected of being ‘homosexuals’ but were instead charged with offences related to violating the Presidential directives on COVID-19. These directives however, did not limit the number of people who stayed in a house provided they stayed at home. The charges were therefore unfounded. At least two of those arrested were also subjected to beatings, which action contravenes article 24 of the Constitution, which protects from torture, inhuman and degrading treatment.

Next steps and contextual challenges

HRAPF plans to secure their release on bail before the due date. However, as at 30th March 2020, there has been instituted a total lockdown, putting a stop to the movement of private vehicles except for trucks that deliver cargo and food. All institutions, both public and private, have also been shut down, except for ‘essential services,’ which do not include legal services. Again the courts are currently closed except for ‘serious’ offences. The absence of private transportation coupled with the closure of the courts will make the response difficult. This therefore means that in all likelihood, the 20 people will be unable to exercise their right both to legal counsel and to apply for bail until after the lockdown is complete. Nevertheless, HRAPF shall continue to do all that is possible to ensure the protection of the basic inalienable rights of marginalised persons during this period.

HRAPF has issued a statement before, the call in which we hereby reiterate, urging the state to respect human rights and protect vulnerable groups even as the fight against COVID-19 goes on. See full statement at https://hrapf.org/index.php/10-hrapf-news/89-hrapf-pressstatement- on-human-rights-and-covid-19