Tanzania President John Pombe Magufuli, whose government has been accused of repeated violations of LGBT people’s rights, today (Nov. 5) was sworn in for another term in office. 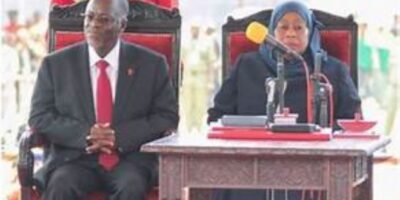 He took the oath of office today in the administrative capital, Dodoma.

Local media is reporting that this is the first time a Tanzanian president has been sworn in from the new capital, Dodoma City, which was built to replace the historic capital, Dar es Salaam. Magufuli’s new term ends in 2025.

“I, John Pombe Joseph Magufuli, do solemnly swear that I will execute my duties as the president of the United Republic of Tanzania, with integrity to fulfill the responsibilities of my roles diligently…,” he said in Swahili.

LGBT repression during his administration

Tanzania authorities’ repression of LGBT rights activism came in the context of government repression of opposition parties, nongovernmental organizations, and the media ahead of the country’s general elections, HRW said.
Crackdowns on LGBT Tanzanians and on advocates for their human rights and health have been ongoing since 2016. The repression gained international notoriety in 2018, when Paul Makonda, the administrative chief of Dar es Salaam, urged the public to report anyone they thought was a homosexual.
Earlier this year, the United States  banned Makonda from visiting the country for his role in a  crackdown. The U.S. State Department said it was taking the action against Makonda “due to his involvement in gross violations of human rights, which include the flagrant denial of the right to life, liberty, or the security of persons.”
Ugandan President Yoweri Museveni attended the inauguration ceremony.  He praised Magufuli for his economic programmes, saying that he seen Tanzania moving from an underdeveloped country to middle-class status during Magufuli’s rule.

Upon taking the oath, Magufuli who was cheered on by his supporters held up a ceremonial spear and shield to signify the beginning of his presidency. 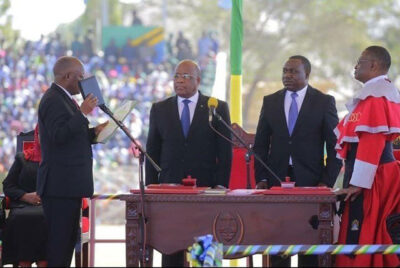 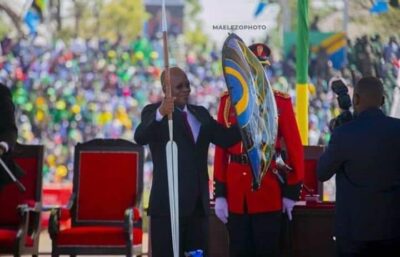 A victorious Magufuli displays the shield and spear immediately after swearing in. (Maelezo photo)