The arrest of an alleged homosexual on March 12 in Touba, Senegal, is the latest in a vicious trend of entrapping gay men using dating sites.

Demonstration against homosexuality in Dakar, Senegal, in January 2015. The signs read “No pedophiles” and “We will never in our lives accept homosexuality or lesbianism in our country.” (Photo courtesy of Seyllou/AFP)

The recent political upheavals in Senegal have not improved the situation for LGBTI people in Senegal. There has been no respite from homophobia in the land of teranga (“hospitality” in the local language Wolof), where once again a terrible video has been shared on social networks, showing a young alleged homosexual barbarously tortured.

Journalist Moïse Manoel spoke to Souleymane Diouf (pseudonym) of the Free Collective, a leading organization pressing for LGBTI rights in Senegal, to ask about Diouf’s impressions on this alarming trend.

Moïse Manoel: Can you tell us the circumstances of this new arrest?

Souleymane Diouf: The young man, Modou D. (his name has already been published in the Senegalese press) was arrested on Friday, March 12, in Touba, by members of the Islamist organization Dahira Xudamul Xadim, led by Modou Diop Diaobé. The use and use of the term “dahira” is intended here to deceive the public and the authorities and thus serve to disguise the activities of this unofficial religious militia. [Editor’s note: A dahira is a common association in Senegal that brings together Sufi Muslims on the basis of educational, philosophical, geographic, or professional ties. The members of a dahira are dedicated to their leader — a “grand marabout” or “sheikh,” a person through whom they believe God’s grace is revealed.]

Someone made a report alleging the homosexuality of Modou D., a young man from Touba. In order to arrest him, they infiltrated a digital platform, spun a web and set a trap. Members of Dahira Xudamul Xadim undertook to seduce him by posing as gays, in order to obtain “compromising evidence” such as audio tapes or even videos, and to exchange private messages that would lead Modou D. into making advances.

After apprehending Modou D., Xudamul Xadim held him in their cells for several hours. He then was presented to officers at the Touba police station and later was turned over for prosecution. According to the latest news, he will be brought before a judge on March 25. In the meantime, he could have prepared his defense, except that he still does not have a lawyer. Meanwhile, he lives in detention under difficult circumstances; he is barely given any food.

The Free Collective of Senegal notes that this is the second arrest this year of a suspected homosexual in the Diourbel region where Touba is located. We deplore, once again, the role of illegal parallel police provided by Islamist groups who enforce their laws in Touba with great arbitrariness. This is not the first time we have protested the very difficult conditions of imprisonment experienced by LGBTI people in Senegal.

In January, former detainees, de facto convicted of their alleged sexual orientation, reported they were beaten and starved while in prolonged custody in the cells of a Dakar police station. Their mistreatment was so bad that some of them testified that they wanted to try to commit suicide by electrocution, by biting electric cables, in order to put an end to the torture.

Manoel: Recently, a violent video showing a young gay man from Dakar being tortured made the rounds on social networks. What happened to him? Is he alive?

Diouf: Like Modou D. in Touba, this young Dakar resident was also trapped on a dating site. We will call him Papis Tandjigora (pseudonym), for reasons of discretion. The extremely serious facts in question date back to around Feb. 22, in the Yoff district where the old Dakar International Airport is located.

The images of this young man forced to undress in the middle of the filth, before being beaten up and whipped with thick cut electric wires, are just unbearable. Nothing has been done to the perpetrators of this terrible attack. The victim, meanwhile, is missing. In order to escape his torturers, he jumped from the second floor of the apartment where he was being held. Papis Tandjigora owes his life to his temerity and extraordinary courage which enabled him to leap from a height of nearly 10 meters in order to survive. The fact that the assault was premeditated and thought out before being filmed adds to the perversity shown by the torturers of Papis Tandjigora. To this day, Papis is missing but is believed to be alive. 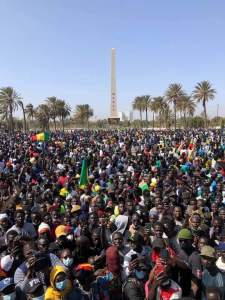 Demonstration hostile to President Macky Sall, at the Place de l’Obélisque in Dakar

In the meantime, in early March, Senegal experienced a period of unrest marked by clashes between the regime of President Macky Sall and the opposition led by Ousmane Sonko. Consequently, the sordid news about Papis Tandjigora has been relegated to the background.

For our part, the Free Collective is considering an appropriate response to this resurgence of attacks against people who are contacted on dating sites. For now, we cannot say more publicly.

People and organizations wishing to contribute financially to our work assisting victims of homophobia and transphobia in Senegal can write to us at senegalcollectifree@gmail.com. At the moment, any help is welcome, more than ever.

This article originally appeared in French on 76Crimes en Français, and was translated by Rob Salerno.