Senegalese protesters against homosexuality gathered in Dakar, Senegal, on May 23 to call for a harsher anti-gay law.

Speakers treated the gathering as a “rally to outlaw homosexuality” even though Senegal already has a law threatening prison sentences of one to five years for people convicted of sexual activity “against nature” with persons of the same gender.

For example, imam Lamine Dramé told the crowd that criminalization of homosexuality should be an issue in the next presidential candidates. “Any candidate who does not take this concern into account must be rejected as clearly evil,” he said.

The speakers’ denunciation of Freemasons as supposed LGBTQ allies was a modern variation of conspiracy theories about Masonic fraternal organizations that have existed for hundreds of years. 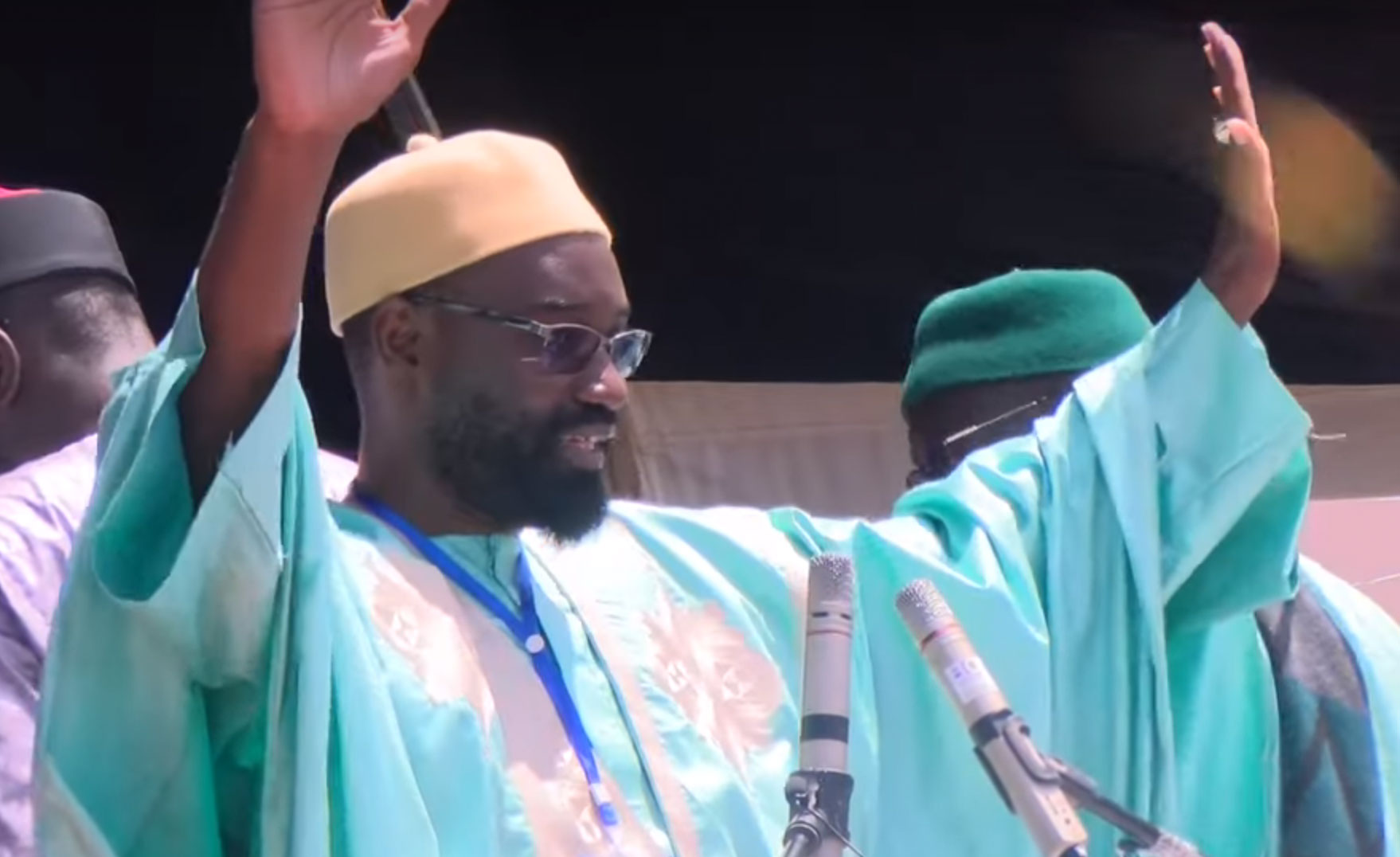 Speakers at the May 23 protest called on Muslims to oppose homosexuality with violence, if necessary.

Q. Saliou Tandjigora, as a Senegalese activist, please tell us what the atmosphere was in Senegal on the eve of this homophobic protest, at a time when a petition is circulating on social media to further criminalize homosexuality.

A. Beforehand, the march was little publicized except on Xalat TV, a YouTube channel with a large following among Wolof-speaking people.

Article 18 of Senegal’s newly revised press code forbids discrimination against people on the basis of their sexual orientation or gender identity.

From a political point of view, the backers of the homophobic petition are a motley crew of people from civil society who are trying to put pressure on the political class. Among them are Abdou Karim Gueye (polemicist), Omar Diagne (economist), Babacar Mboup (theologian), and Dame Mbodj (trade unionist teacher).

In this context, focusing on a subject like homosexuality is a good way for them to test their popularity on an issue they have been working on for a long time. Their approach has always been the same: to promote nationalism, to hate France, to proclaim an ersatz pan-Africanism, all presented with a macho style that often includes homophobia. They fail to propose constructive and alternative solutions to the ills affecting Senegalese society, such as youth unemployment and low purchasing power, for example.

The Senegalese political class, including presidential challenger Ousmane Sonko, is reluctant to sign such a populist, demagogic and irresponsible petition. [He was warmly welcomed at the May 23 rally, however.]

They are not keen on opening a Pandora’s box of human rights issues that could lead to a witch-hunt, so they’ve been kicking the can down the road and clinging to the current status quo. Even Serigne Mountakha Mbacké, the top religious leader of the Islamic Mouride sect [Senegal’s dominant group of believers], is reluctant to sign such a document. On the other hand, the other Islamic brotherhoods of the country and other imams have given their approval to the petition.

Among Senegalese people, this march is received in various ways. Individuals and religious leaders are quick to throw their weight around on LGBTI people. However, in Senegal there is also a silent majority and the way sexual issues are politicized in the public space by homophobes is not very appealing. For some, homosexuality is above all a private matter and there can be no question of the state interfering in the privacy of individuals to see whether they go to heaven or not.

Media and organizations wishing to address the Collectif Free of Senegal can write to the following email address: collectiffree.urgence@gmail.com. 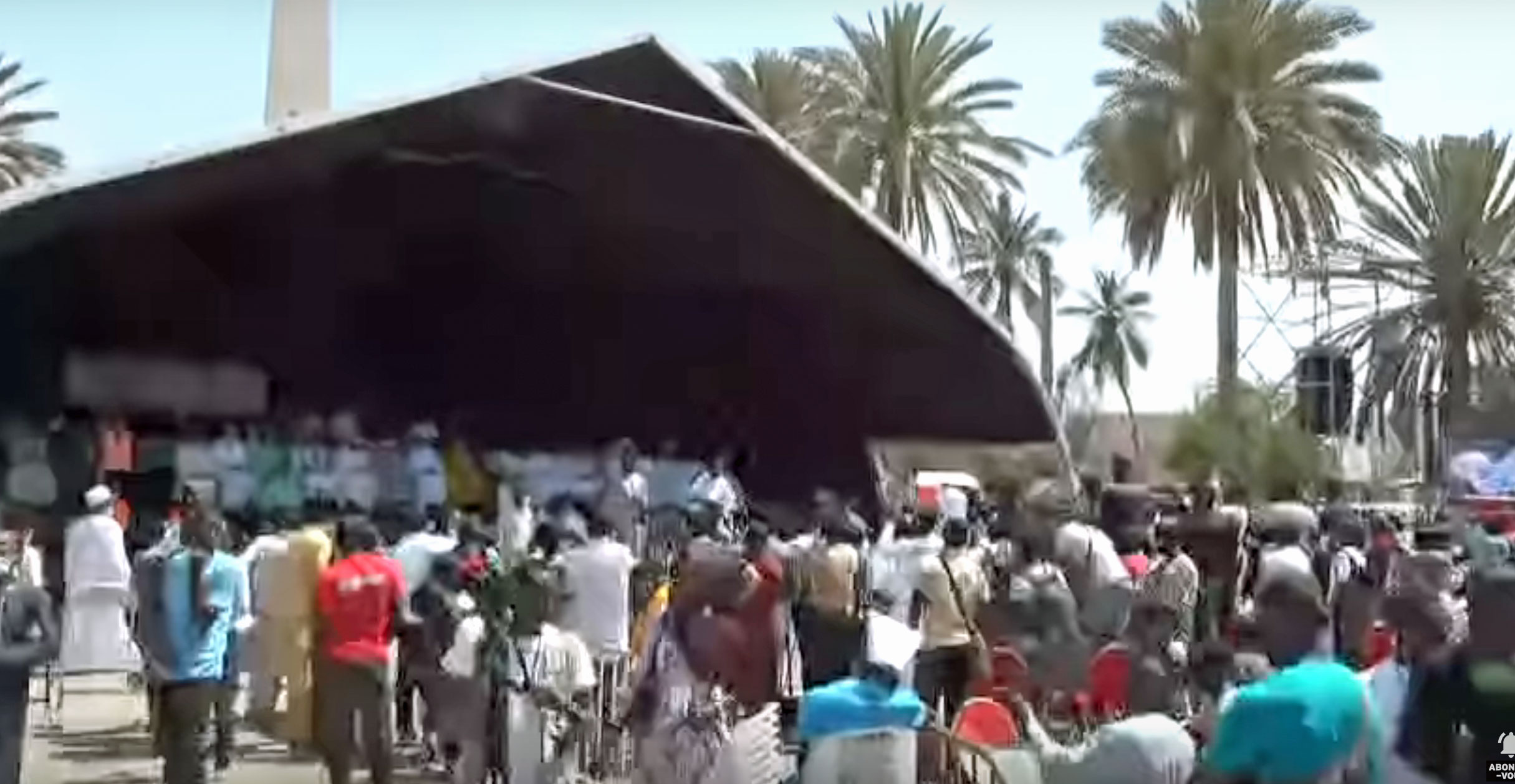 “Say No to Homosexuality” protest in Dakar, Senegal, on May 23. (Photo courtesy of DakarActu)

Summaries of speeches at the “Say No to Homosexuality” rally:

Oustaz Makhtar Sarr of the “Say No to Homosexuality and Freemasonry” alliance presented a brief history of that association. According to him, their group got wind of a satanic project wanting to make Dakar the capital of Freemasons and LGBT people, something they could not let happen because Senegal is a land of holy men, of Islam. He recalled that their alliance has managed to censor video clips on social media that it deemed obscene, to ban Rihanna concerts in Senegal, to inform people of what they believe are the state’s schemes for the LGBT cause. In his diatribe, he declares that LGBT people and their defenders will never find peace in Senegal. Today they burned a rainbow flag, but tomorrow, if nothing is done and the state turns a deaf ear, they will burn LGBT people.

Dr. Boly Diop, president of the Order of Physicians of Senegal, declared that homosexuality is a psychiatric and psychological disorder. To him, it makes no sense to pass laws favoring LGBT Senegalese because he considers them abnormal people who need treatment. In his viewpoint, homosexuality is an abomination that must be fought to the death.

Abdou Faty, representing teachers, and Dame Mbodj, a teachers trade unionist, declared that they will never accept educational programs from UNESCO and others that promote tolerance. Any attempts by the government of Senegal to pressure teachers or teach young children about tolerance, respect of gender and personal privacy will be in vain, they said.

Abdou Karim Gueye: a radical activist, gave a belligerent, violent speech. After haranguing the crowd, took out a rainbow flag from his bag and had it burned. He also defended radical Islamist imams who are currently behind bars. According to him, they have done nothing wrong. He and his friends want a Senegal that is like the Afghanistan of the Taliban, including sharia, required veils for women, and the imposition of Muslim morality.

Dr. Abdoulaye Lame and Imam Galadio Ka, two religious leaders, both spoke in Arabic. (Why address a majority Wolof-French-speaking crowd in Arabic? To whom were these two clerics really speaking? To outside forces?) In addition, in Wolof, they endorsed the alliance’s proposals for severe measures against LGBT people and urged Freemasons to leave Senegal in peace.

Ababacar Mboup, coordinator of the alliance and the originator of the homophobic petition circulating in Senegal, was presented as the highlight of the show. He gave an overview of the alliance’s struggle of their petition, which he said has been signed by most of the leaders of Senegal’s religious brotherhoods. Freemasons are plotting against Islam and for LGBT people, he declared. Overall, he put on a show that was reminiscent of Hitler’s fascist speeches.

In summary, it was a sad day for Senegal, with a crowd mostly composed of veiled women, bearded men, Islamic Salafists of all types, and some idle youth in search of scapegoats on whom to pour their bile.

The major political actor at the gathering was presidential challenger Ousmane Sonko, president of the PASTEF political party, who arrived to acclamations from the public and the leaders of the alliance. His smile made clear his position: Sonko is on the side of Muslim fundamentalists.

Colin Stewart and Möise Manuel contributed to this article.