More than 35 religious leaders in Uganda have vowed to preach, practice, and promote inclusivity in their places of worship, saying that exclusion has done harm to minority populations like the LGBT community.

Some of the participants at the inclusivity meeting in Kampala recently. (Photo courtesy East Africa Visual Artists)

The leaders made the pledge during a religious inclusivity workshop organized last month by the East Africa Visual Artists (EAVA) in Kampala under the theme “I Am Free In Faith, Say No To Religious-Based Homophobia.”

The workshop is part of a series or activities being conducted by EAVA with support from Arcus LGBTI+ to combat religious-based homophobia in Uganda.

Vincent Kyabayinze, Executive Director of EAVA, says it’s time to have frank discussions with affirming religious leaders regarding the fate of LGBT persons in the Church.

“The decision to engage religious leaders on this matter is deliberate because of the influence that they command in society,” says Kyabayinze. He says homophobic religious leaders are driven by ignorance and hate.

“No informed and honest religious leader can stand on a pulpit and preach death to LGBT persons,” he adds.

“LGBT or not, we are all children of God created in His own image” Senyonjo says. He says there is no place for homophobia in the Holy Scriptures. 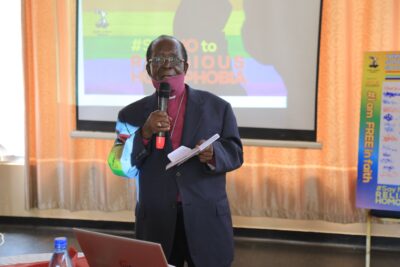 Pastor Ram Gava of the Adonai International Ministries says his Church has embraced inclusivity and opened its doors to all God’s people, regardless of their religion, gender identity, sexuality and status in society.

“This workshop organized by EAVA has further strengthened my resolve never to exclude anyone because he or she or they are LGBT” Gava says.

When it opened its doors to LGBT persons, Adonai International Ministries witnessed a steady increase in its congregation at its Church in Entebbe.

“This reveals how thirsty these people were for spiritual healing and empowerment,” Gava says.

For those who are unable to attend physical services due to distance or personal safety reasons, the Church has started weekly zoom services.

Pastor Simon Mpinga of The Family of Affirming Ministries (TFAM) Uganda told his fellow religious leaders that they should unite to include not to exclude.

“Whenever we meet as church leaders, let us ask ourselves; how do we reach out to those who have been left out? As a Pastor, I refuse to be part of a plot to destroy humanity. Let us be inclusive,” Mpinga says. 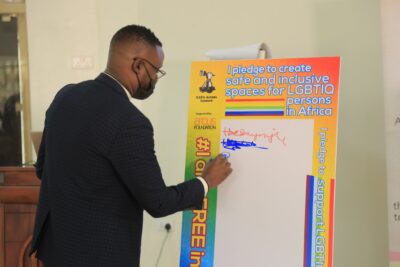 One of the participants signs a pledge to create safer and inclusive spaces for LGBTIQ people in Uganda and on the African continent. (Photo courtesy of EAVA)