A celebration of freedom for 11 LGBTQ prisoners in Cameroon

A message to donors who support justice and mercy for LGBTQ people worldwide:

It’s time to celebrate the success of Project Not Alone 2021. Because of donors such as you, all the 11 imprisoned victims of Cameroonian homophobia who have been the focus of this project have been released from prison or now have new early-release dates in the relatively near future. 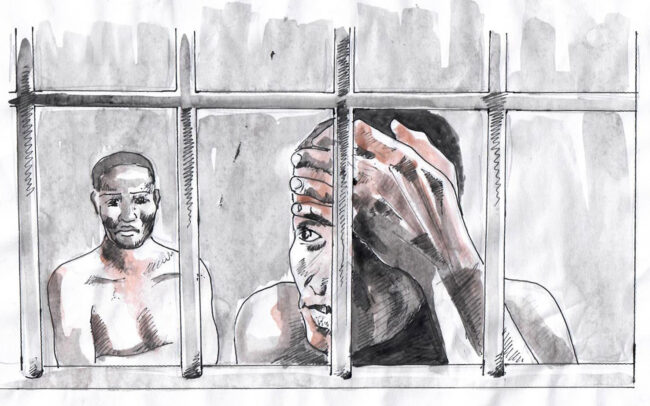 Illustration depicts Evan and Kane, who were imprisoned for homosexuality in Yaoundé, Cameroon. In May, they were freed early from prison because donors contributed money to pay their fines. (Illustration by Vincent Kyabayinze, East Africa Visual Artists / EAVA Artists)

(All that is 100% true, but see an important caveat — and donation request — below.)

Freedom for  the 11 LGBTQ victims of Cameroonian homophobia is based on the generosity of donors such as you and the persistence of hard-working LGBTQ activists in Cameroon — journalist/activist Courtney Stans and activist attorneys at Défenseurs Sans Frontières (DSF)..

Colin Stewart, manager of the project and co-founder of the African Human Rights Media Network, elaborates:

Below is a tally of what we have accomplished together for the 11 prisoners, including 8 who have won early release and 3 who are better off but aren’t completely in the clear. All 11 were convicted of nothing other than violating Cameroon’s anti-homosexuality law, except that Nick and Allen were also convicted of protesting too vociferously when their employer stopped paying them because they are gay. 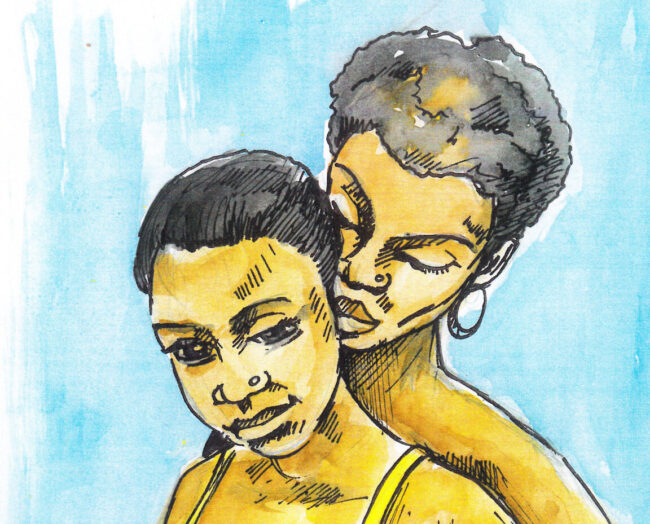 Illustration depicts Roro and Gold, who were imprisoned for homosexuality in Yaoundé, Cameroon. In June, they were freed early from prison because donors contributed money to pay their fines. (Illustration by Vincent Kyabayinze, East Africa Visual Artists / EAVA Artists)

These 8 prisoners have been or soon will be released early because their fines and court costs were paid from donations made to Project Not Alone 2021 via the St. Paul’s Foundation for International Reconciliation, which supports advocacy journalism in nations with anti-gay laws:

These are some of their stories (mostly from when they were still in prison):

When the project began last spring, Nadine, Ford and Bill had been imprisoned for more than a year with no trial even scheduled. Through your gifts and the pro-bono efforts of a DSF attorney working with Project Not Alone, in late summer they were released on bail, pending trial.

Without your financial help, the new prison term for Nadine will extend to May 2022 (A trans woman, Nadine now has a different pseudonym from her previous masculine-sounding one, “Ned”.) She was credited for the time she spent in prison awaiting trial so, as a result, her sentence will end later this month — if a new round of donations covers her fine and court costs. The total that she owes is $395. Because the donated bail money can be rolled over to help pay her fine and court costs, she needs donations of an additional $219 if she is to be freed this month.

Similarly, the prison terms for Ford and Bill will end in August 2022 — or in February 2022 if a new round of donations covers their fines and court costs. (The total of the fines and court costs for Ford and Bill is $744. Subtracting the $364 rollover of bail money, they need donations of an additional $380 if they are to be freed in February rather than next September.

This is their story, from back in June:

If you feel moved to help set free this project’s three remaining victims of homophobia in Cameroon, please DONATE via: