Desmond Tutu , the iconic  LGBT human rights defender and anti-apartheid champion, the retired archbishop of Cape Town, South Africa, has died. Tutu, who referred to South Africa as a rainbow nation, rallying people on behalf of unity in diversity — including queer people — was 90 years old. 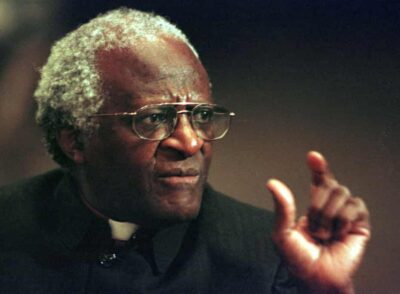 Desmond Tutu, one of the leaders of the anti-apartheid movement,  died at the age of 90, the South African President’s Office announced Sunday.

In 2013, in response to widespread homophobia among African Christians, he famously said that he would rather go to hell than worship a homophobic God. He said:

“I would refuse to go to a homophobic heaven. No, I would say sorry, I mean I would much rather go to the other place. I would not worship a God who is homophobic.”

Local media is reporting that the anti-apartheid activist had been living with prostate cancer for many years.

“The passing of Archbishop Emeritus Desmond Tutu is another chapter of bereavement in our nation’s farewell to a generation of outstanding South Africans who have bequeathed us a liberated South Africa,” President Cyril Ramaphosa said.

A statement on behalf of the Tutu family described him as a man who “turned his own misfortune into a teaching opportunity to raise awareness and reduce the suffering of others.”

Tutu was a leading campaigner against the apartheid policies of South Africa’s National Party, which ruled the country until 1994.

Born in 1931, he became a key organiser of peaceful demonstrations against white minority rule.

He was awarded the Nobel Peace Prize in 1984.

As South Africa transitioned to democracy, he headed the Truth and Reconciliation Commission charged with uncovering the truth about human rights violations committed during the apartheid era.

Tutu is credited with coining the term “rainbow nation” to describe the nation’s ethnic diversity.

“Archbishop Desmond Tutu was a prophet and priest, a man of words and action – one who embodied the hope and joy that were the foundations of his life. Even in our profound sorrow we give thanks for a life so well lived. May he rest in peace and rise in glory,” said Archbishop Justin Welby, leader of the Anglican Communion. 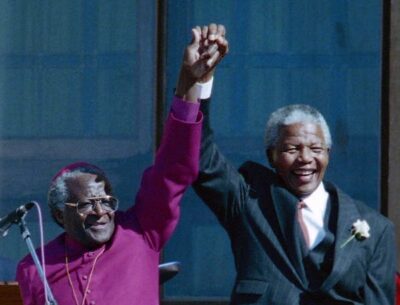 Desmond Tutu with Nelson Mandela in 1994, two of the towering figures of the anti-apartheid movement in South Africa. (Photo courtesy of The Conversation) 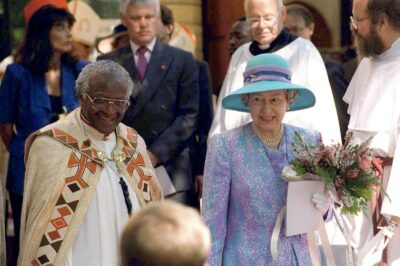 Kikonyogo Kivumbi, the author of this article, is the executive director of the Uganda Health and Science Press Association. Contact him at uhspauganda@gmail.com