During an international review of Uganda’s human rights record, the Ugandan government made no direct mention of LGBTI rights and did not commit to addressing the stigma and homophobia that hang over Uganda’s LGBTI community. 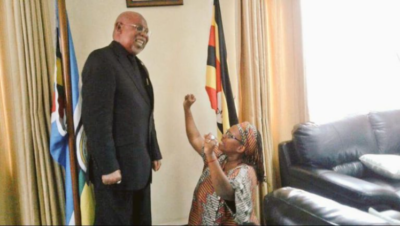 Ugandan LGBT ally Dr Stella Nyanzi (R) kneels to plead before Gen. Jeje Odongo in 2018, seeking a permit to demonstrate through the streets of Kampala against kidnapping and murders of women. Odongo was Minister for Internal Affairs at the time. Now, as Uganda’s Foreign Minister, he led the country’s delegation to this year’s U.N. human rights peer review in Geneva. (Photo courtesy of Soft Power)

The latest focus on human rights in Uganda came during the U.N. Human Rights Council’s Universal Periodic Review (UPR) process on 27 January, in a meeting that was attended by 97 states. Details of the review can be viewed here.

During the meeting, representatives from numerous countries which included Canada, Denmark, Germany, France, Malta, Ecuador, Portugal, Luxembourg, Spain, Brazil and Ireland, among others, urged the government of Uganda to decriminalize same-sex relationships and end discrimination against LGBTI persons.

In his submission during the review, the Foreign Affairs Minister and head of the Uganda delegation, Jeje Odongo, said that Uganda had upheld rights and freedoms despite the legacy of colonialism, taken part in many U.N. peacekeeping missions and respected international human rights standards.

“Our government remains committed to upholding the rights and freedoms in our Bill of Rights and Constitution. We have adopted a human rights-based approach to development”, Jeje said.

However, he said that rights that are acceptable in some cultures may not necessarily be accepted in Uganda — a comment that some suspect was directed at LGBTI people’s rights. (Watch at 02:53 of the video of Gen. Odongo’s response to the review.)

In a joint submission to the national UPR stakeholders’ forum Secretariat, over 40 civil society organizations working under the auspices of Uganda’s Sexual Minorities Cluster urged the government of Uganda to repeal all repressive and discriminatory laws that are used to unjustifiably limit the human rights of LGBTI persons and sex workers and limit the civic space for civil society organizations working with sexual minorities. 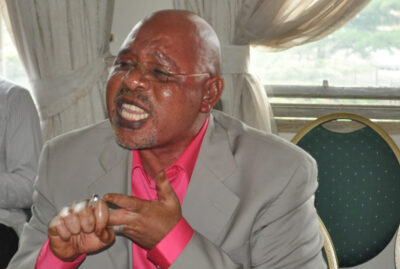 The executive director of SMUG, Dr. Frank Mugisha, lauded countries that raised the issue of LGBTI rights in Uganda, saying that despite the difficult times they face at home, Uganda’s human rights defenders have allies they can count on.

Uganda’s first and second UPR reviews were in October 2011 and October 2016.

The UPR is a process that involves a periodic review of the human rights records of all 193 U.N. member states. Since its first meeting in April 2008, all those member states have been reviewed twice within the first and second UPR cycles. During the current, third UPR cycle, governments are again expected to spell out steps they have taken to implement recommendations posed and agreed upon during their previous reviews and to highlight recent human rights developments in their countries.

The United States appreciates Uganda’s longstanding policy of open borders for refugees seeking safety, including ongoing efforts to support individuals from Afghanistan relocated by private organizations. However, we remain concerned about worsening restrictions on civic space.

We recommend that Uganda: 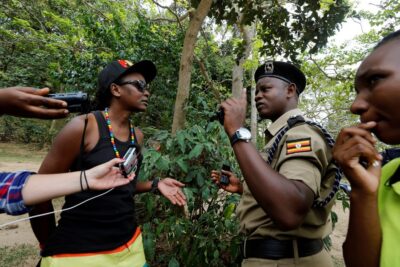 Uganda police officers question a member of Uganda’s LGBTI community during their pride parade in Entebbe, near Kampala, before police asked LGBTI members to abandon their gathering, on September 24, 2016.  (Photo courtesy of Council on Foreign Relations)

Joto La Jiwe, the author of this article, is a Ugandan correspondent for the African Human Rights Media Network and the Erasing 76 Crimes news site. A member of the Uganda Health and Science Press Association, he writes under a pseudonym. Contact him at [email protected]