Qtalk ‘can be a life saver’: Canadian praise for Nigerian LGBTQ+ app

A prominent Canadian LGBTQ+ magazine has heaped praise on Nigeria’s Qtalk counseling app, which is supported by this website and by the LGBTQ+ rights advocates of St. Paul’s Foundation for International Reconciliation. 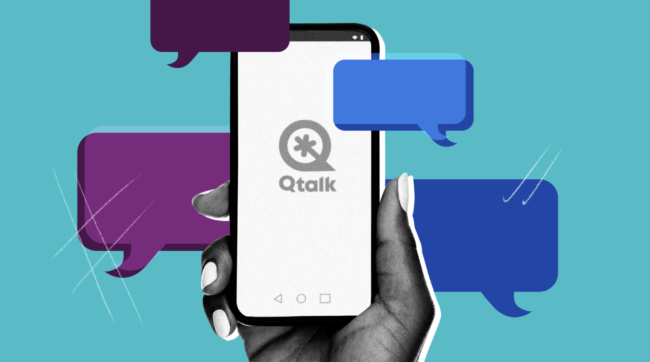 It is illegal for LGBTQ+ Nigerians to gather. This app offers a safe opportunity to form community

Facing discrimination and isolation, online mental health counselling can be a life saver

In the early hours of Jan. 4, 2022, Femi Joseph needed someone to talk to about his relationship. The 19-year-old (whose name has been changed to protect his identity) had just come out of a toxic relationship that left him emotionally scarred, and he figured the best way to deal with it was to talk with someone. But without money to access therapy and a fear of meeting with a homophobic therapist, he searched for alternatives.

His best friend suggested an app called Qtalk. “According to her, I was going to speak with someone without giving out any details about myself,” Joseph says. Although he was skeptical at first, he gave it a try. “The app asked me to give details about what I was going through, then I requested a counsellor. In less than 24 hours, I was paired with someone who spoke with me.”

Qtalk is a social app that enables LGBTQ+ Nigerians to speak with a counsellor, find a community and get the latest stories on what’s happening within the community. Run by a community of volunteer mental health care workers, the app fills a gap created by the Same-Sex Marriage Prohibition Act (SSMPA)—a discriminatory law that puts the lives of LGBTQ+ people in danger—signed into law by Nigeria’s former president, Goodluck E. Jonathan, in January 2014.

“The country’s anti-gay laws make it risky for LGBTQ+ persons in the country to access tailored health care services or even legal support.”

The SSMPA prohibits the gathering of LGBTQ+ Nigerians, making it difficult to find community. It also punishes sex between men with up to 14 years’ imprisonment. In up to 12 states in Northern Nigeria that have adopted Sharia law, those who marry face death by stoning.

“The country’s anti-gay laws make it risky for LGBTQ+ persons in the country to access tailored health care services or even legal support,” says Mike Daemon, a Nigerian journalist and founder of Qtalk. “This is one of the reasons why I set out to develop the Qtalk app: to provide a virtual safe space, free from any form of discrimination where members of the LGBTQ+ community will be able to access quality health care and legal services without worrying about the exposure of their identities or getting arrested.”

Logo of The Initiative for Equal Rights (TIERS)

A 2017 study conducted by The Initiative for Equal Rights (TIERs) shows that discriminatory laws like the SSMPA deepen mental and psychological health issues for LGBTQ+ people, making them less likely to seek help from medical practitioners. It also creates legal uncertainties, stopping people from getting legal aid when they have problems. For Daemon, addressing these barriers and challenges faced by LGBTQ+ people is essential.

Homophobes are known for infiltrating apps created for LGBTQ+ people and either blackmailing or outing them, so Qtalk—which launched in 2019—prioritizes keeping users safe on the app. “Given the vulnerability of a platform like this, we introduced a community guideline and safety tips for members to comply with, to ensure that it remains a safe space for everyone,” Daemon says.

In addition to access to counsellors, the Qtalk app provides features that enable people to chat privately and share voice notes, photos and screenshots. Sharing a photo can help people in terrible situations express what they can’t describe with words. And unlike other apps, Qtalk users can join rooms where they can communicate with others in a safe space. Often, LGBTQ+ people find it hard to communicate without trolls joining in, but with Qtalk, where every member is part of the community, safety is guaranteed.

While there are places where LGBTQ+ people can access therapy for free in Nigeria, like the Mentally Aware Nigeria Initiative (MANI), some people have spoken out about the delay in accessing services and the sometimes homophobic attitudes from counsellors.

Samuel Emeka (also a pseudonym), 23, recalls being depressed and suicidal at the start of the pandemic. The then 21-year-old filled out the MANI form, and was paired with a counsellor after 48 hours. “I honestly felt I was going to lose it in the time I had to wait to speak with someone,” he says.. “And then, the person I spoke with asked me if I had thought of repenting when I mentioned the problem I faced at home due to me being gay.”

Emeka’s experience made it hard for him to seek therapy. “I resorted to bottling my feelings and dealing with them [myself]. The fear that I might receive a response like that again wouldn’t let me do anything,” he says.

With more than 2,000 active users and a dedicated number of pro-bono counsellors, Qtalk is an important resource to help address issues like Emeka’s.

At the moment, Daemon and his team of developers are working to add more features and improve the overall user interface of the app. … “We want to make it more efficient and easy to navigate,” Daemon says.

As Nigeria’s first LGBTQ+ focused social app, Qtalk is currently only available on Android, with plans to build for iOS to “scale up access to the app.”

The term “LGBTQ2S+” is a Canadian equivalent of “LGBTQ+” with the inclusion of “2S”, which stands for “two spirit”, a term used by some Indigenous people to describe those who identify as having both a masculine and a feminine spirit.

Loading...
Newer Post
Cameroon: Lesbian barely survived family rejection; now she has hope
Older Post
A year of progress on global LGBTQ rights, but so much remains to do