Uganda has started a new bid to host the 2023 International Conference on AIDS and STIs in Africa (ICASA), attempting to rehabilitate its reputation following the removal of the 2021 conference from Uganda to South Africa amid concerns over police brutality and poor human rights.

Uganda’s former minister for the Presidency, Esther Mbayo (second from left), and the director general of the Uganda AIDS Commission, Dr Nelson Musoba (first from left), at the launch of a call to design a logo for ICASA 2021 Uganda. The 2021 conference was moved to Durban, South Africa, over police brutality in Uganda. (File Photo)

ICASA is a major biennial international AIDS conference organized by the Society for AIDS in Africa (SAA).

The Office of the President of Uganda is preparing a bid to host the 2023 conference, which must be submitted to SAA by July 30.

In this year’s bid, Uganda is attempting to show that it is working with key populations to scale back the spread of HIV by highlighting a meeting attended by homosexuals, sex workers and drug users that was organised by the Uganda AIDS Commission (UAC), the central coordinating body for the country’s AIDS response. The meeting is being presented as a departure from anti-gay sentiments that fueled HIV/AIDS among the country’s homosexuals and sex workers community a decade ago.

UAC is also committed to having homosexuals play a key role in reversing the growth of new HIV infections in Uganda, as described in the National HIV and AIDS Strategic Plan for 2020/21 through 2024/25.

The Uganda Network of Sex Workers Organizations (UNESO) has already spoken out in support of Uganda’s bid to host ICASA 2023.

“On June 7th 2022, UNESO was part of a high-level KP [key populations] leaders meeting organized by the Uganda AIDS Commission to build a strong case for Uganda’s bid to host the second edition of the International Conference on AIDS and STIs in Africa (ICASA 2023). During the meeting, KP community leaders were able to review the bid draft and showed support to participate in national, regional, and global advocacy efforts toward hosting ICASA 2023,” UNESO posted on its Facebook page.

Still, some activists continue to argue that Uganda still has discriminatory laws and policies that continue to harm people living with HIV. A coalition of more than 50 civil society organisations is challenging the HIV/AIDS Prevention and Control Act 2014 which they allege is discriminatory and an impediment to the fight against AIDS. 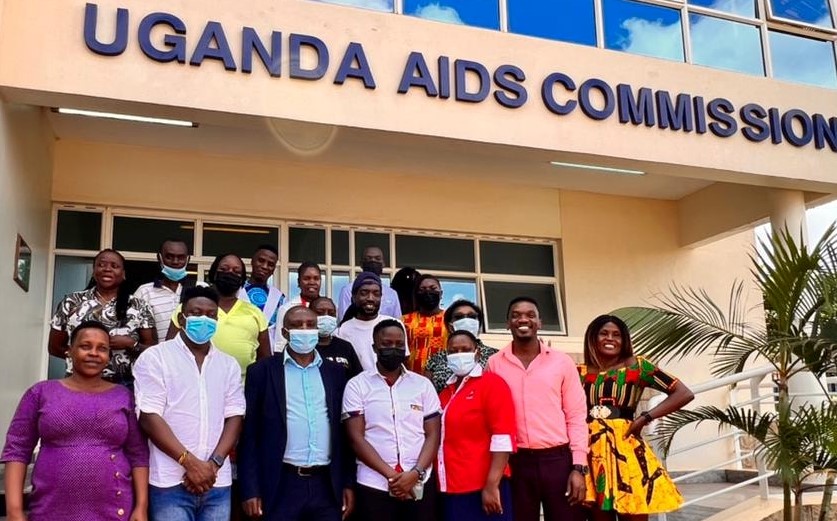 Some of the leaders of Uganda’s key populations community after a meeting June 7 at the Uganda AIDS Commission. (Photo courtesy of UNESO)

Uganda had won the bid to host ICASA 2021, but several human rights activists had been critical of the selection.

Denis Nzioka from Kenya and Phillipa Tucker from South Africa wrote to SAA to criticize the administration of Ugandan President Yoweri Museveni for “crushing opposition voices and presence while trampling human rights” during political protests during the run-up to Uganda’s January 2021 elections.

Museveni blamed the protests on “homosexuals who do not want a stable Uganda.”

Among the requirements for potential ICASA host countries, SAA demands that the host be politically stable and have no discriminatory government policies based on gender, HIV status and religion.

Based on such requirements, SAA stripped the 2021 conference from Uganda and moved it to South Africa.