The Tunisian LGBT rights group Mawjoudin (Arabic for “We Exist”) has been providing vital services to vulnerable community members through the COVID-19 pandemic, according to its just released annual newsletter.

Among its other activities, Mawjoudin launched the “Queer Riot” campaign calling for repeal of Tunisia’s sodomy laws. (Photo courtesy of Mawjoudin)

Mawjoudin was founded in 2014 by feminist and LGBTQI+ activists to advocate for sexual minorities and fight discrimination based on sexual orientation, sex, gender, and gender identity. In addition to its advocacy work, it maintains a network of friendly health and legal professionals and organizes an annual Queer Film Festival.

Logo of Mawjoudin (We Exist).

The impact of the COVID-19 pandemic has led to a great demand for the group’s counselling and other services, Mawjoudin states in its newsletter.

“The virus has an impact on the world in general and on all groups, especially vulnerable groups in Tunisia, including the queer community, asylum seekers, immigrants, and women who live in a vulnerable situation,” the newsletter reads.

“The queer community has had difficulty coping with the sudden new circumstances in their homes. Their identities have been disintegrated. During the quarantine among family members who do not support them, they have been in a financially difficult situation and limited access to health and psychological services.”

Mawjoudin’s aid took many forms, including legal, medical, and psychological support, as well as direct financial support and housing and food aid for dozens of queer community members. It also partnered with other organizations providing aid during the pandemic to help community members receive additional support. 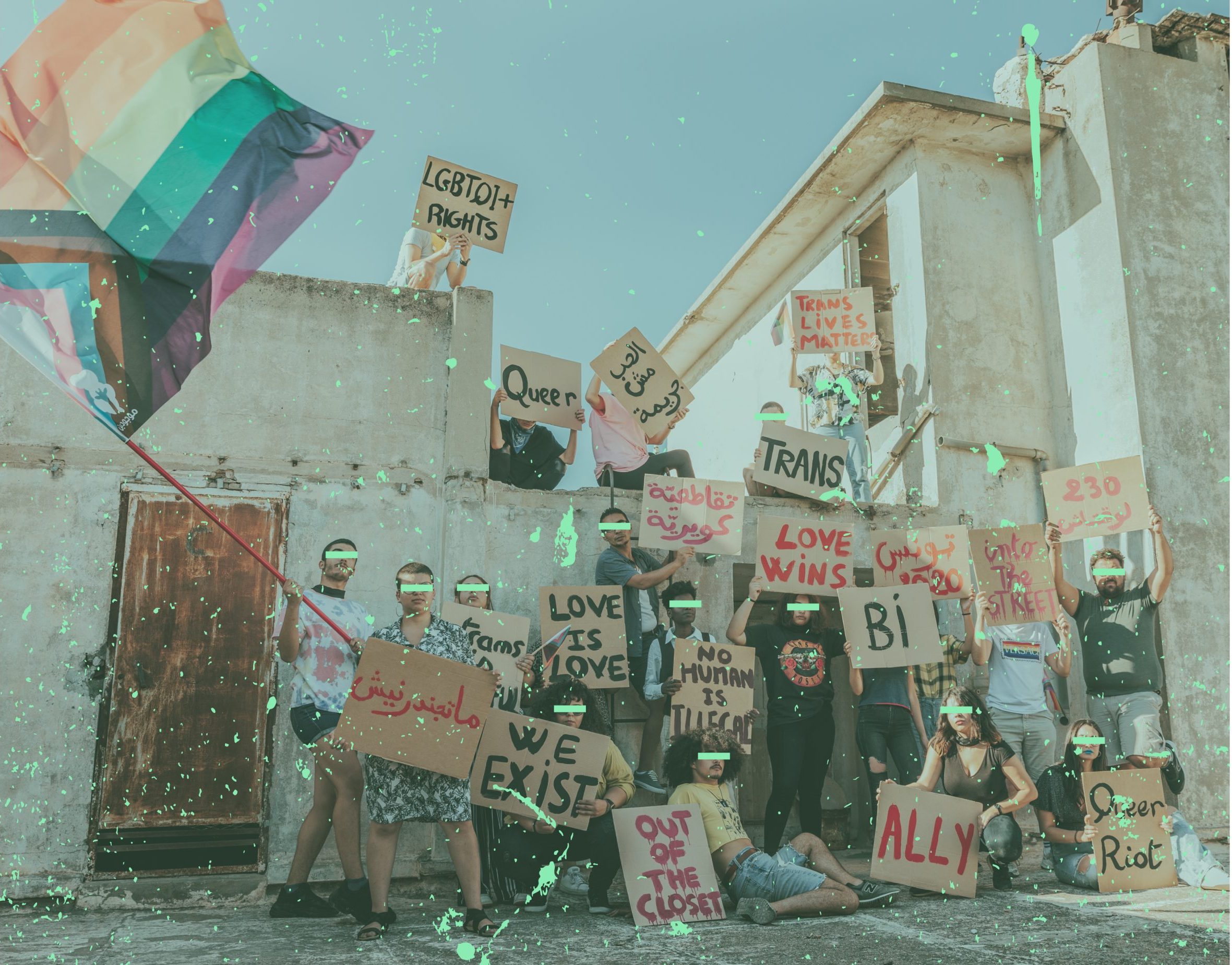 The identities of protesters taking part in the “Queer Riot” campaign were hidden for their safety. (Photo courtesy of Mawjoudin)

The group worked to assist Tunisian asylum seekers in Europe and asylum seekers in Tunisia. Among its clientele were persons who identified as Jordanian, Lybian, Sudanese, Guinean, Egyptian, Lebanese, Moroccan, Ivorian, Malian.

All of this was in addition to Mawjoudin’s ongoing work to fight discrimination and promote sexual minority rights. The group held several interventions in university campuses, held several film screenings, registered a new organization The Queer Maghreb Coalition, and participated in protests against the draft law on the repression of attacks against the armed police forces.

Mawjoudin also launched the Queer Riot campaign calling on the government to repeal Section 230 of the penal code, which criminalizes consensual sodomy between men with a prison sentence of up to three years.

Mawjoudin worked with Damj, the Tunisian Association for Justice and Equality, and other partners to produce this video describing the importance of online security for LGBTQ people.