LGBT human rights defenders in Uganda want President Yoweri Museveni  to refuse to sign into law the Sexual Offences Bill 2019, which Parliament passed May 3. Their reason: The bill has a “problematic clause 11 that now classifies sexual and gender minorities as sexual offenders.” 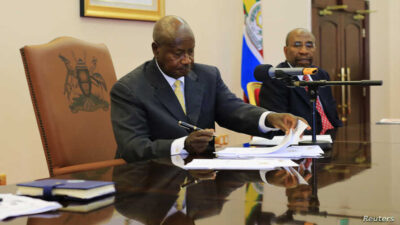 On Feb. 24, 2014, Uganda President Yoweri Museveni (center), flanked by Prime Minister Ruhakana Rugunda (right), signs into law that year’s Anti-Homosexuality Bill at the State House in Entebbe  That law was later annulled by the Constitutional Court on the grounds that Parliament passed it without the requisite quorum. (Photo courtesy of VOA News)

In a statement issued Wednesday, the activists note that Clause 11 of the  bill  further criminalizes same-sex sexual acts even as the Uganda Penal Code Act already does, hence criminalizing the private lives of adult and consenting same-sex-loving persons.

The statement issued by Sexual Minorities Uganda (SMUG), the umbrella organisation for the nation’s lesbian, gay, bisexual, transgender and queer organizations, focuses on Clause 11, which criminalizes sexual acts between persons of the same gender and the penetration of any person’s anus with any object or another person’s sexual organ.

Dr Frank Mugisha, the SMUG Executive Director said in the statement that the passed bill  “fails at that level to protect a section of Ugandans who are sexual and gender minorities by criminalizing them rather than punishing those who might be their sexual offenders.”

The SMUG statement is reproduced verbatim below: 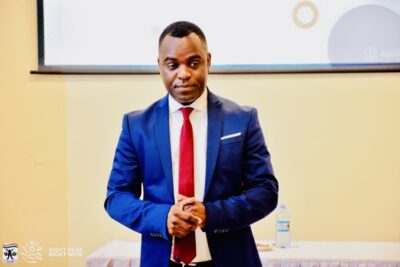 The Uganda Parliament passed the Sexual Offences Bill 2019, yesterday 03 May 2021. The initial object of this Bill is to enact specific laws on sexual offences for the effectual prevention of sexual violence; to enhance punishment of sexual offenders; to provide for the protection of victims during sexual offences trials; to provide for the extraterritorial application of the law; to repeal some provisions of the Penal Code Act. On paper, the Bill resembles the ideal law to counter the ever-increasing cases of sexual violence that many Ugandans of all gender identities face as documented by the Uganda Police.

Sexual Minorities Uganda (SMUG) as the network organization for lesbian, gay, bisexual, transgender and queer organizations in Uganda is particularly concerned about Clause 11(i) which further criminalizes same-sex sexual acts even as the Uganda Penal Code Act already does, hence criminalizing the private lives of adult and consenting same-sex loving persons. The clause criminalizes and bans the penetration of another person’s anus with that other person’s sexual organ or with any object; and (ii) sexual acts between persons of the same gender.

SMUG is concerned that this clause in the Bill will enhance the already homophobic environment in Ugandan and consequently lead the way for further violation of the rights of sexual and gender minorities, including violations such as “corrective rape” and other acts of violence. Clause 11 also goes against the very essence of the Bill to protect Ugandans from sexual violence. The Bill also goes against the right and protection of minorities as stipulated in the Constitution of the Republic of Uganda under Article 21 on Right to Equality and Non-discrimination as enjoyed by ALL Ugandans.

As Sexual Minorities Uganda, we contend that if the Bill intends to consolidate sexual offences into a single piece of legislation, provide for a single piece of legislation on the subject matter for purposes of clarity and accessibility to help the legislation respond to the evolving and current trends in sexual offences and curb sexual violence and adopt international best practices in the prevention of sexual violence, the classification of same-sex relations in the same Bill increases the already existing violence that LGBTQIA+ Ugandans face. Therefore, the law fails at that level to protect a section of Ugandans who are sexual and gender minorities by criminalizing them rather than punishing those who might be their sexual offenders. The Parliament’s attempt at streamlining all laws on sexual offences by adopting new language to cater and name the sexual offences is applaudable if only the Bill does not criminalize same-sex relations. 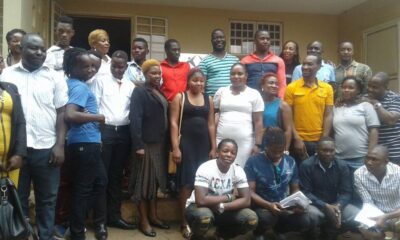 Members of the LGBT and sex workers community in a previous meeting. (File photo)

Sexual Minorities Uganda calls on the President of the Republic of Uganda to consider NOT assenting to the Bill because of the problematic clause 11 that now classifies sexual and gender minorities as sexual offenders. Rather, we call on the President to reminisce on the effects the now repealed Anti-Homosexuality Act had on the human rights discourse for sexual and gender minorities.

We also call on the Uganda Law Reform Commission to play a more technical role in advising Parliament on harmful laws that jeopardize other state-driven efforts such as the HIV prevention and control efforts by the Ministry of Health by driving sexual and gender minorities underground because they are illegal.

The Bill is prompted by the need to cure the defects in the existing legislation, especially the Penal Code Act, Cap. 120, which, while it makes provision for several sexual offences, the provisions are outdated. The ingredients constituting the offences are narrow, given that they do not reflect the evolving trends in social attitudes, values, and sexual practices.

For more information: Email us
info@sexualminoritiesuganda.com
Dr. Frank Mugisha on +256-772-616-062