A Namibian court has found that the constitution bans discrimination based on sexual orientation, in a case that also found that the two-year-old child of a gay couple born through surrogacy in South Africa must be granted citizenship. 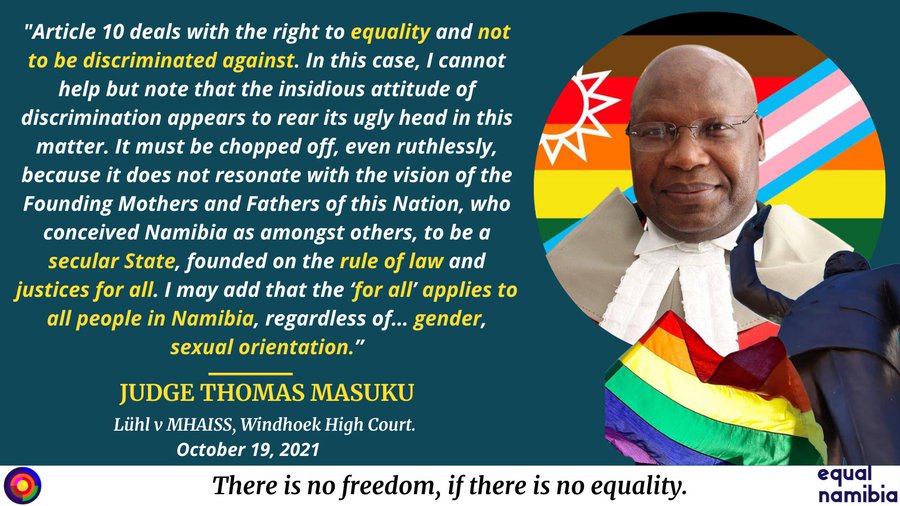 The case is believed to be the first time a judge has found that the Namibian constitution bars discrimination based on sexual orientation, and some advocates are hoping that the decision may bolster ongoing court challenges for LGBTQ rights, including several pending cases related to same-sex marriage. Earlier this year, the minister of justice also announced plans to repeal the common law offence of sodomy, although no such legislation has yet been introduced.

The decision is the latest turn in a series of court battles being fought by Philip Lühl and Guillermo Delgado, a gay couple living in Namibia who married and had three children born through surrogacy in South Africa. Although South Africa recognizes gay marriage and surrogacy, Namibia does not.

Judge Thomas Masuku found that failing to automatically recognize the child’s Namibian citizenship simply because his parents are in a same-sex marriage was unlawful discrimination in violation of Article 10 of the Namibian Constitution, which guarantees equality for all citizens.

“I cannot help but note that the insidious attitude of discrimination appears to rear its ugly head in this matter,” Judge Masuku wrote in his decision. “It must be chopped off, even ruthlessly, because it does not resonate with the vision fo the Founding Mothers and Fathers of this Nation, who conceived Namibia as amongst others, to be a secular State, founded on the rule of law and justices for all. I may add that the ‘for all’ applies to all people in Namibia, regardless of colour, gender, sexual orientation, etc.”

Masuku also wrote that barring the child from citizenship also violated his rights under the African Charter on the Rights and Welfare of the Child prohibiting discrimination based on his parents’ status.

Due to Namibia’s refusal to recognize their relationship, Lühl and Delgado are continuing to fight several legal battles, including one seeking recognition of Delgado’s right to reside in Namibia as a Mexican national married to a Namibian citizen, as well as recognition of citizenship for the couple’s twin daughters born earlier this year in South Africa. The girls were initially barred from entering the country as Namibia refused to grant them travel documents to leave South Africa, where they were born, but the government finally relented and allowed the girls to be reunited with their family while their broader question about their citizenship is resolved in court.

The Namibian Supreme Court is also expected to rule next year in two other cases seeking to require the Namibian government to recognize same-sex marriages performed in other countries.