Sick and abandoned, a 26-year-old Nigerian man has been locked up in a cell for the past nine months without trial. He was arrested in August at a party that police decided was a gay wedding, was charged with homosexuality-related offenses, but then seems to have been forgotten. 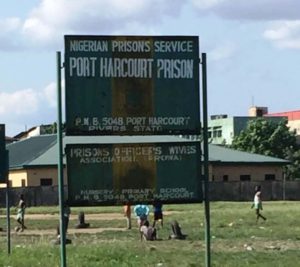 Sign for Port Harcourt Prison, where Chinda is being held. (Photo by Mike Daemon)

Other people at the party were also arrested, but they were released after each of them paid a bribe of 150,000 naira (about U.S. $415) to Nigerian police.

The case of the prisoner, identified here as Chinda (a pseudonym), was reported anonymously to the advocacy website NoStringsNG by a Nigerian police officer.

Mike Daemon, reporter and founder for NoStringsNG, investigated, including a visit to see Chinda at the Port Harcourt Maximum Security Prison. Entry to the prison was made possible by a senior prison warden.

Chinda looked sick, malnourished and pale. He told Daemon what happened to him:

He was arrested in August 2017 when police raided a friend’s birthday party that Chinda attended in Port Harcourt. Of the police raid, he said: 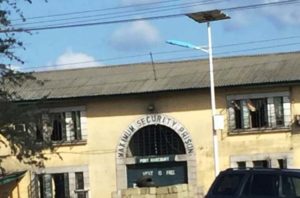 “I could not believe what was happening. The police came into the hotel during the party and started beating some of the people that were there. They said that we were [celebrating a]  gay marriage.

“When I saw how they were treating the others, I tried to run, but one of the armed police officers brushed me with his legs. I fell to the ground and was immediately handcuffed and thrown into the back of their motor-van along with others and taken to the police station.”

After spending five nights in police detention and failing to pay a bribe like the rest who paid and were freed, Chinda was taken to court and ordered to stand trial at Rivers State High Court on charges of engaging in homosexual-related activities.

Nigeria’s Same-Sex Marriage Prohibition Act calls for prison sentences  for people in same-sex marriages (14 years) and for people who attend or organize a same-sex wedding, who organize or support “gay clubs, societies, organisations, processions or meetings,” and for people who make a “public show of same-sex amorous relationship” (10 years). 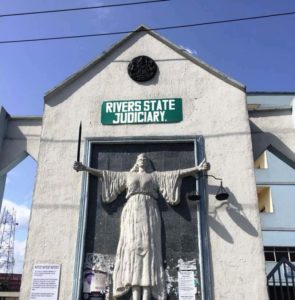 Often such charges can be avoided by paying a bribe.

“My parents are [deceased], and my elder brother whom I was living with showed up only once at the police station and stopped coming after hearing that it was a homosexual case. The police asked for 150,000 naira, but I couldn’t pay as I had no money. Others who paid were freed, but because I failed to pay, they charged the matter to court.”

Chinda has been in prison since August 2017 and has only been to court once. He has lost hope.

He doesn’t even have a lawyer.

“People here said that if I get a lawyer, I will be able to come out,” he said.

“I did not do anything. I only attended a birthday party. It was not a gay marriage.

“I only went to court once, before I was remanded in prison since then. Nobody has come to take me to court or look for me. It is hard here. I have to stay hungry most of the time. The suffering here is too much for me, and the worst is, when you get sick, no medicine. I think I will die here.”