Police in Cameroon arrested 25 alleged homosexuals last night at a gay-friendly bar and a gay cinema in Yaoundé, the capital city. Two of them were released after questioning. The other 23 will remain incarcerated awaiting court action on Monday. 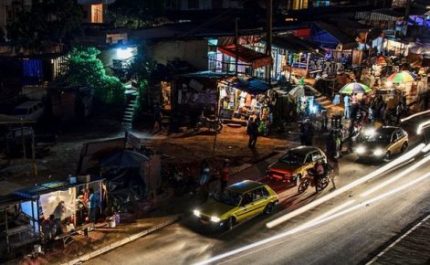 Just after midnight Saturday morning, police swarmed into the Essos area of Yaoundé and forced their way into Le Mistral, a cabaret and popular gay meeting place that had closed for the night.

At first, police officers posed as customers, pleading to be allowed inside  despite refusals from the cabaret’s staff. Police then forced open the door.

According to one of those who were arrested:

“We informed them that the tavern was already closed, but they forced the door open. Then they took us [to jail] without any reason.”

Police arrested seven people in the cabaret, including a dancer, a waiter and the security guard. They then raided a gay movie theater in the  Emombo I Crossroads area and arrested 18 people there. 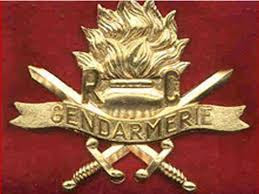 A symbol of Cameroon’s police force.

After that, all 25 people were taken to the central police headquarters, where they were questioned all night. One police officer inadvertently revealed the extent of the interrogations in a conversation with a representative of LGBT rights attorney Jathan Ndongo.

In contrast, Police Commander Parfait Nana claimed that only two arrestees were interrogated that night.

Nana met with five lawyers and activists who converged on the police station to seek the release of the detaineers: attorney Saskia Ditisheim of Lawyers Without Borders Switzerland, Michel Engama of Camfaids, Jean Jacques DISOCKE from Alternatives-Cameroon, Patrick Tonkeu from Humanity First Cameroon and the representative of Ndongo’s firm.

“Among the 25 people held in custody, two who were witnesses at the scenes were released after a hearing. The remaining 23 will be interrogated; conclusions will be reached at the close of the investigations. I already can reassure you that several types of violations have been identified, such as lack of a CNI [national identity card], possession of narcotics and homosexuality. Personally, I do not judge anyone and do not condemn anyone on the basis of their sexual orientation. However, Cameroon has laws to enforce. “

Several parents have descended on the central police station, seeking the release of their children. Police officers have told them that their children are homosexuals and so deserve their fate.

In Cameroon, sexual activity between members of the same sex is punishable by up to five years in prison. In principle, sexual attraction to a member of the same sex is not illegal, but in practice gay men are often arrested on charges of being homosexual.

The 23 people in custody have neither food nor drink. They are awaiting action on their cases on Monday, May 14.