The homophobic Anglican Archbishop of the Church of Uganda, Stanley Ntagali, has said he will retire on March 1, 2020. 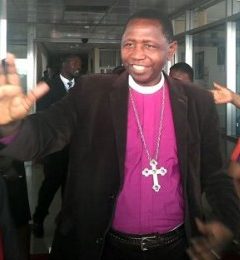 Archbishop Stanley Ntagali in 2016. (Photo courtesy of the Church of Uganda)

Local Ugandan media is reporting that Archbishop Ntagali will leave the top leadership position in the Church of Uganda in 2020 when he reaches the mandatory retirement age of 65.

Archbishop Ntagali made the revelation while addressing the provincial assembly of the Church of Uganda on Friday at All Saints Church Nakasero in Kampala.

On Friday, the Anglican Church officially commissioned the 11-storey Church House on Kampala Road, which was opened by Prime Minister Ruhakana Rugunda as the representative of Ugandan President Yoweri Museveni.

While commissioning the building, Archbishop Ntagali said it is meant to ensure sustainable flow of rental income for the church so it will not depend only on offerings from Christians.

Archbishop Ntagali has been a vocal opponent of homosexuality and of churches that do not discriminate against LGBTI people.

Under his leadership, the Church of Uganda in 2016 boycotted a top Anglican Communion summit in the Zambian capital Lusaka over failure by the top church leadership in Canterbury to disassociate itself from the practice.