Presidential aspirant Donald Duke vows to continue the persecution of LGBTI Nigerians if elected president in 2019. 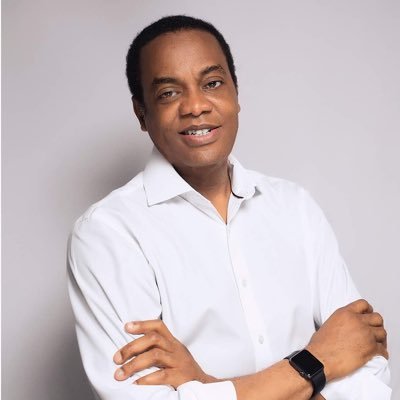 The former Cross River State governor has admitted that the harsh and homophobic condition under which the Nigerian LGBTI community currently suffers will not improve under his political administration if he is elected as president in 2019.

It can be recalled that, throughout last week, the local and international media went viral with headlines which seemed like the ex-governor was the messiah who was coming to make things better for the Nigerian LGBTI community, whereas he is actually homophobic and a very dangerous kind too.

This followed after he talked about homosexuality and the human rights of LGBT persons in Nigeria on an episode of ‘On The Couch Naija’ a show which had musician Falz and broadcast journalist Laila as the host.

Duke said that he was not going to discriminate against LGBTI Nigerians, but rather, was going to protect them. Further into the conversation on the show, he gave an illustration to prove that he was not comfortable with same-sex people displaying their affection for their partners in public, stating that it would be “an affront on the current norms of society” which proved that just like the rest, he is indeed homophobic.

To further clarify his homophobia, he has released a statement affirming his support for the continuous violation of the human rights of LGBTI Nigerians, and this he vowed to continue under his administration if elected as president in 2019.

Clearly, its no surprise as just like every other African politician, Donald Duke is trying to win the votes of gullible Nigerians by using homosexuality to mask his incompetence and divert the attention of Nigerians from other important issues that he ought to be addressing.

See his statement below. 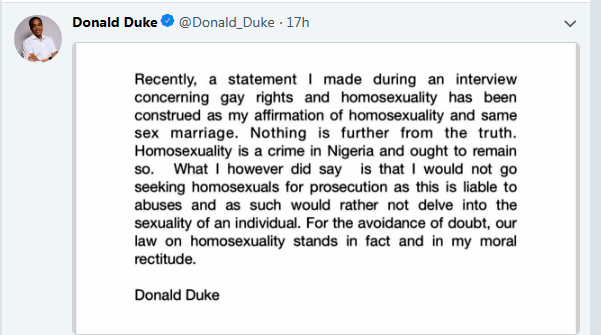