A young man in Tunisia was conned by two men on Facebook who met him, raped him and robbed him. When he reported the crimes to police, they arrested him on homosexuality charges.

The city of Sfax is located in the middle of Tunisia’s east coast. (Map courtesy of Weather-Forecast.com) 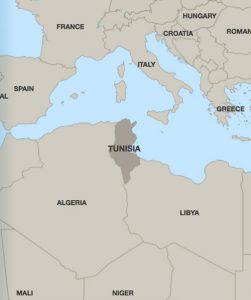 The 22-year-old man was arrested in Sfax when he reported the rape and the theft of his phone and his jacket, taken by two other youths who set a trap for him on Facebook

Then he was placed in detention in Sfax prison for three weeks.

He will go on trial for homosexuality on Feb. 4.

Mehdi Ben Gharbia, Tunisia’s minister for relations with constitutional agencies, civil society and human rights, made the pledge in 2017 in Geneva, Switzerland, during the presentation of the third U.N. periodic report about human rights in Tunisia.

In 2017, Baatour said the minister’s pledge was a ruse: