20 gay refugees protest, then are jailed in Kenya

Twenty LGBTQ refugees who fled from anti-gay violence in Uganda are being held in Nairobi-area jails after they protested against mistreatment by Kenyan police and the United Nations refugee agency. 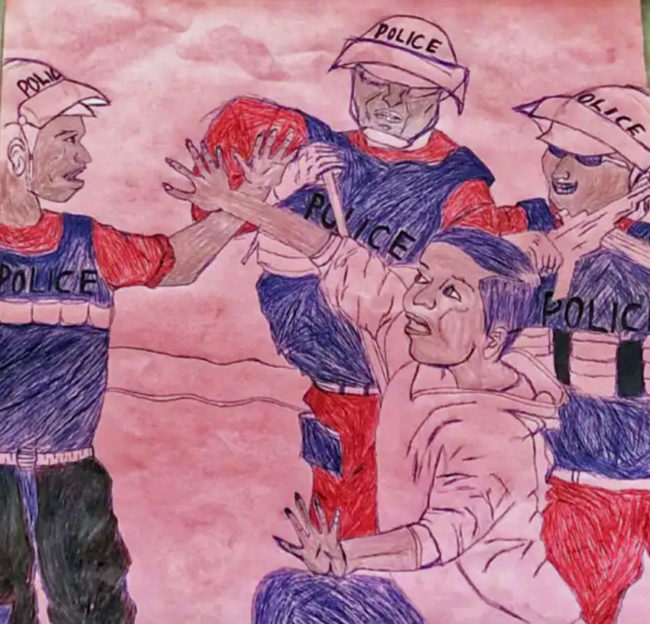 They are scheduled to appear in court tomorrow (March 26), where refugee activists plan to gather to  give them moral support.

Logo of Refugee Flag Kenya: “we are demanding for answers to why they are still suffering in jail”

Tomorrow at 8:00Am, we shall be at city hall court – Nairobi CBD for the hearing of the case against our brothers and sisters who are still suffering in jail. We are demanding for answers to why they are still suffering in jail and nobody is giving us answers. If any agency mandated to protect refugees is behind their suffering or the government, then we need to know so we get plan B. We are tired of being tormented, abused, reduced to nothing because we are refugees. It hurts more when we are suffering and no one is transparent enough to give us answers.

We call upon fellow LGBTQ refugees, activists international and local, media/press to turn up as we demand for justice for our comrades. Today it is them but, trust me, tomorrow it’s us. Nobody should silence you when it comes to advocating for your rights because when you are erased probably nobody will remember you but remember you will die angry and mad at the world for what it made you go through. #Justice_Delayed_Is_Justice_Denied

The Washington Post (here via the Sydney Morning Herald) reported last week from Nairobi about the mistreatment of the jailed refugees:

These LGBT refugees came to Kenya seeking freedom. Instead, they’ve been imprisoned and abused

… [On Feb. 22], 20 LGBT refugees who had come to Kenya hoping to escape repression in countries such as Uganda, Rwanda and Congo were spending their first full day in jail. Their ordeal has now lasted nearly a month and demonstrates the difficulties LGBT people in Kenya face regardless of what happens in the courts.

The refugees were arrested en masse near the headquarters of the United Nations High Commissioner for Refugees (UNHCR), in an upscale neighbourhood of the Kenyan capital. Police say they were creating a public nuisance, trespassing, and defecating in public. In interviews during visiting hours at Nairobi West prison, five of the refugees said the charges are trumped up and that they have suffered horrible physical abuse at the hands of prison guards and other prisoners.

The interviewees complained that they had lice and that those who were HIV positive among them could not access their antiretroviral treatment.

Lutaya Bennon, one of six of the detainees in the men-only prison who identify as trans women, had tears in her eyes as she recounted how guards had ripped out her earrings. “Everyone in here is horrible to us,” she said. “In the night, some other prisoners have come and forced us to let them touch our penises.”

Bennon and others said that all 20 were carrying identification from UNHCR. Edgar Atuhe, 24, who – like Bennon – is Ugandan, said that UNHCR or affiliated organisations had not yet come to check on them in the prison, though a UNHCR spokeswoman said that they had been in contact with the detainees “directly and indirectly” and that a lawyer had been provided for them from a partner organisation.

That lawyer, Atuhe said, told all the refugees to plead guilty, advice which the UNHCR spokeswoman echoed and said was “in the hope of trying to get a reduced or lesser punishment”.
Related Article

“These offenses were committed in public and difficult to deny,” said Yvonne Ndege, the UNHCR spokeswoman. Atuhe and others said they would not take the advice as they believe they did nothing wrong.

Prison guards only let five of the 19 detainees at Nairobi West (one person is being held at a women-only prison nearby) speak to the reporter, saying that “you will get from these five what you would get from the rest”.

Among them was Sabam Kimbugwe, who opened his mouth to show how many teeth had been knocked out by a prison guard (at least four). He said that similar attacks had happened to others whom the reporter was not able to meet, provoked sometimes by small things such as a refusal to eat the porridge they are served every day.

Ndege said “were looking into this” in response to the allegations of abuse in the prison, and said they are planning visits with the detainees this week. 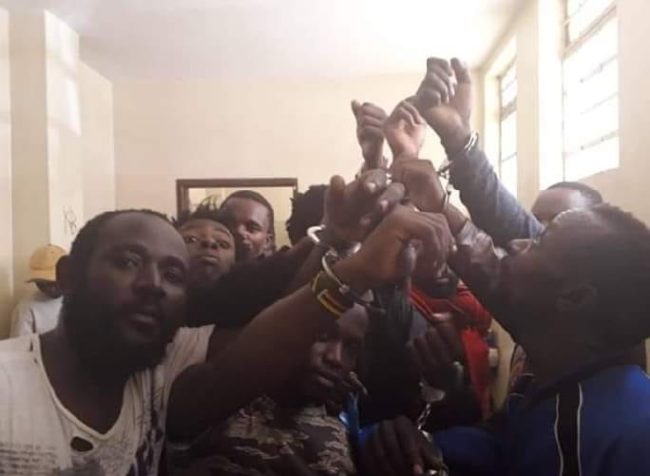 A tentative court date for the refugees has been set for March 26.

Homosexuality is illegal in most African countries, many of which inherited anti-sodomy laws from European colonial governments. Prominent politicians in Kenya have described homosexuality as “un-African” and an affront to the values of most Kenyans, 85 per cent of whom identify as Christians, and another 10 per cent who identify as Muslims.

In neighbouring Tanzania, many LGBT people have gone into hiding after authorities in the capital Dar es Salaam called on residents to “help identify homosexuals” so they could be arrested. Uganda, which also borders Kenya, drew international condemnation in 2014 for passing a law that carried a life sentence for “aggravated homosexuality”. The law was annulled later that year, but thousands of LGBT Ugandans became refugees, fleeing a spate of murders that accompanied inflamed rhetoric around the law.

Many, like Lubega Musa, came to Nairobi, and hope to be resettled in more accepting countries such as Britain or Canada. Musa, 26, now lives in a suburban safe house with other refugees – and is friends with many of those recently detained. He has been in Kenya for almost three years and cautioned against optimism despite the judicial progressiveness many activists here hope for.

“If homosexuality is decriminalised here, it will actually be worse for us. Our resettlement process will slow down, or even stop. UNHCR will say we are safe now. But actually, we will be less safe,” he said. “It would be a good moment for activists, but it is a scary one for the refugee or the trans woman on the street. To the celebrators, I say shorten your high heels, babe! If it happens, this could be a huge milestone, yes, but on the street, it is just one step.”