Cameroonians like Vision 4 very much in Yaounde, where it is hailed as a new promising television media. And yet this channel has nasty and shocking words when it comes to LGBT people, especially during certain shows such as “Tour d’Horizon” 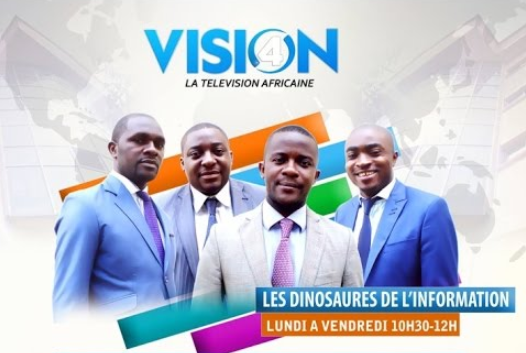 Vision 4 is a Cameroonian TV channel

Vision 4 is one of people’s favourite TV channels in the capital. Its promoter Mr Amougou Belinga was behind the notorious “TOP 50” list which was published in his newspaper L’Anecdote. This took place in January 2006, when three privately-owned newspapers, namely La Météo, La Nouvelle Afrique, and L’Anecdote, published that list of supposedly LGBT public figures. These lists were aimed at politicians (including ministers and chief executives of public companies), artists (internationally recognized musicians and singers), clerics (mainly Catholic bishops and priests), and sportsmen (high-level soccer players). Hence homosexuality was brought to the public’s attention and was used to stigmatize those who were suspected of being gay.

Today, Vision 4 has grown thanks to its show “Tour d’Horizon” where social issues are debated with the assistance of journalists with very fixed views about homosexuality in Cameroon. This popular show is aired every weekday from 10:30 to 12:00 and appeals to viewers owing to its firm standpoint on hot topics.

The four journalists on the show describe homosexuality as “against nature” and as being something alien imposed from the West. They spread hate against LGBT people who, they say, are pedophiles and corrupt young boys and girls.

One of the viewers of the channel says Vision 4 should be punished by the local authorities for spreading hate and division among Cameroonians. This channel has consistently portrayed LGBT people as the outcasts of society.

“According to me, gays are not rational beings, Ernest Obama, Vision 4’s manager, says. I do not understand how a man can go with a man, and a woman with a woman. The State’s laws should protect our children who are targeted by those devils who aim at destroying the world.”

The following statements were shown in news headlines: “NO to homosexuality in our society. We don’t want them here in our land,” and “We have a red alert here, let’s protect our children from the gay threat.”

The power of the media is shown in their ability to define people’s way of thinking. I would be tempted to say “to shape the way people think,” but their influence is subtler and basically helps define the social agenda. Their power comes from their communication tools which enable them to impose their ideas about LGBT people. That is how they condition how other people will behave.

They can build as well as destroy a business’s or a person’s reputation. In today’s society, media contribute towards the emergence of shared values to live by.

Therefore, this case is an instance of the media’s harmful influence in the Cameroonian society. How can anyone feel secure when television encourages and facilitates abuse of LGBT people?

Article edited and translated by Bruno Agar, Ph.D. Bruno is a member of the African Human Rights Media Network and a lecturer at Paris-Saclay University, France. His professional focus is on contemporary media issues, especially in the African context.

Loading...
Newer Post
Botswana wants to make gay sex illegal again
Older Post
Staying safe as gay in Nigeria is hard, but here’s how to do it