A gay man in Ivory Coast was beaten up by family members earlier this month after introducing his male lover to them. 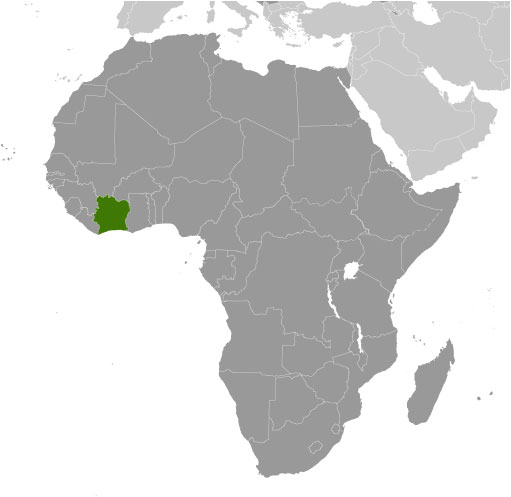 The location of Ivory Coast in West Africa.

Jules Franckrin Kouamé Kouadio, ironworker by trade, was beaten up by members of his family after presenting his lover on his 35th birthday.

On Saturday, Feb. 8, at Plateau-Dokui, Jules Franckrin Kouamé Kouadio held a birthday celebration. He had invited his friends and acquaintances to a lunch washed down with beers and wines in a friendly atmosphere.

During the festivities, Kouadio introduced his lover of several years. His gay friends applauded. His family did not.

The next day, at 7 a.m., when he was about to take a shower, his uncle, K.D. appeared at the door, accompanied by several other members of the family.

His parents asked him if his announcement the day before was a joke or was serious.

Angered, K.D. told him that Kouadio from that moment was no longer part of the family. K.D. said he would not let him “tarnish the image of the family with his nonsense,” referring to his sexual orientation.

Kouadio could not convince them to accept him.

The uncle ordered other family members to beat him up or kill him.

Kouadio saved his life with help from neighbors who sheltered him and took him to a health center for treatment. They then took him to a church in Abobo Clouetcha. His stay in the church was short-lived because church members refused to help him. Instead, they demanded that the pastor to throw him out.

He was left homeless, hoping that the local LGBT community or government officials would help him.

“I am in danger of death. My religious community and my family have abandoned me. Is it a crime to be gay?”

Ivory Coast has no law against homosexual activity, but it does not prohibit discrimination against LGBT people.

Stigma and rejection of LGBT people at health centers is common.