A high appeals court in Tunisia has rejected a government attempt to shut down the LGBT rights group Shams for the Defense of the Rights of Homosexuals.

Kapitalis.com reported the news. This is an edited translation: 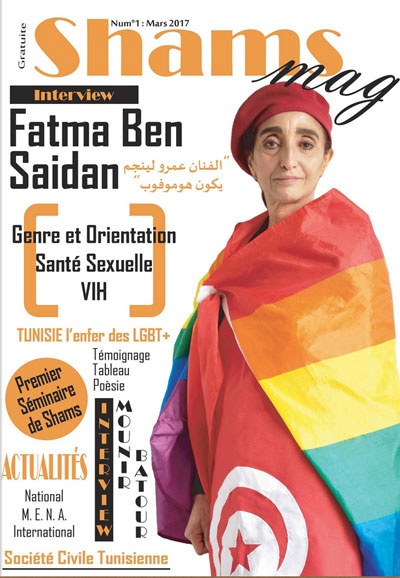 Cover of the first edition of Shams Mag.

On Feb. 21, a Tunisian appeals court (the Court of Cassation) definitively rejected the government’s bid to shut down the LGBT rights group Shams.

Shams (Arabic for “sun”) now has full legal authorization to continue its advocacy work. [However, its founder and president, Mounir Baatour, remains the target of legal action. He recently fled to France to avoid prosecution.]

The government began its case against Shams by declaring that “Shams cannot continue its activities, which go against the traditions of Tunisians, who are Muslim. Islam prohibits these practices. also prohibited by Tunisian law, under Article 230 of the penal code.”

That ruling was rejected in a lower court in February 2016. The government appealed, but lost again at the the Court of Appeal of Tunis in May 2019.

Many human rights activists supported Shams’ right to continue its work. The U.N. High Commissioner for Human Rights wrote to the Tunisian government to express its concern about this attempt of closure of the association.

The U.N. commissioner called Tunisia’s legal assault on Shams a “violation of the principle of non-discrimination and of the right to freedom of opinion and expression.”