The homophobic outgoing archbishop of the Church of Uganda, Stanley Ntagali, used his final Sunday service to declare that Uganda will not be intimidated into accepting same-sex marriages.

The outgoing Archbishop of the Church of Uganda, the Most Rev, Stanley Ntagali (2nd left), receives a caricature from James Abola (right), the head of laity at All Saints Church, Nakasero. (Photo courtesy of the Daily Monitor)

In his last service as archbishop, Archbishop Ntagali told the Church of Uganda congregation in Kampala on Sunday that the church will not follow liberal views held by some individuals and institutions in the West.

The incoming archbishop, the Rt. Rev. Dr. Stephen Samuel Kaziimba, whose public views on homosexuality are not yet well known, is to be enthroned March 1.

Ntagali’s words apparently mark a shift in his public views on homosexual relationships in Uganda. During the past decade, he was instrumental in supporting the current cabinet minister for economic planning, Mr. David Bahati, when Bahati introduced the infamous Anti-Homosexuality Bill in the Ugandan Parliament. Ntagali often maintained that homosexuals are evil and non-existent before God. 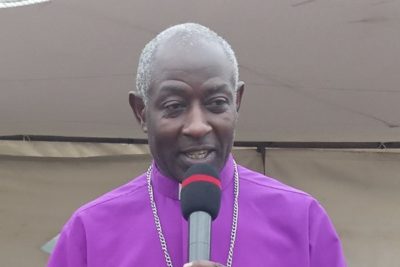 Archbishop-elect Stephen Samuel Kaziimba of the Church of Uganda

Ntagali now appears to understand that homosexuals in Uganda are part of the wider society. His focus is on opposition to their marriage rights, which differs from the past, when it was taboo even to admit they existed.

Local media is reporting that Ntagali reiterated his earlier stance that, because of disagreements about same-sex relationships, Uganda would not attend this year’s Lambeth Conference, a top Anglican Communion gathering organised by the Bishop of Canterbury.

Kaziimba has been the bishop of Mityana Diocese, about one hour’s drive from Uganda’s capital city of Kampala. He will be the ninth archbishop since the establishment of the Church of Uganda by the British Church Missionary Society in 1877.

In a press statement issued last year in Kampala, the Rt. Rev. Edison Irigei, the dean of the Church of Uganda, announced the result of the election held during a church meeting at St. Paul’s Cathedral, Namirembe, in Kampala.

Kazimba is also the chairperson of the Inter-Religious Council of Uganda’s HIV/ AIDS Committee. IRCU has on several occasions been accused of discrimination against members of the Ugandan LGBT community.

In addition to the Church of Uganda, members of the IRCU include the Roman Catholic Church (RCC), the Uganda Orthodox Church (UOC), the Uganda Muslim Supreme Council (UMSC), the Seventh-Day Adventist Uganda Union (SDAUU), Born Again Faith in Uganda (BAF) and the National Alliance of Pentecostal and Evangelical Churches in Uganda (NAPECU). IRCU works with other religious organizations, namely the Spiritual Assembly of the Baha’i, the Methodist and Lutheran Churches.

LGBT activists have in the past had a difficult relationship with the IRCU because of hateful language by its faith leaders, its refusal to allow LGBT people to access health care and its belief that the Universal Declaration of Human Rights should not apply to homosexuals. Most of the health facilities in Uganda, including those in hard-to-reach areas, are owned by faith-based institutions that are members of the IRCU. 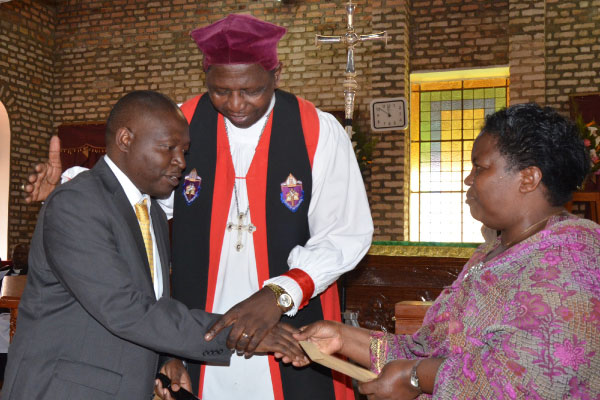 As the leader of Uganda’s second-most-important religious institution after the Catholic Church, Kazimba will have a role in implementing The Church of the Province of Uganda provincial strategic plan (2016-2025). The plan, among other things, seeks to do away with “sexual immorality and sexual perversion” in the country.

The new archbishop has on several official occasions tried avoiding open public criticism of homosexuals in the country, instead focusing on the importance of hard work to improve household income in society.

Kazimba sees the HIV/AIDS scourge as a behavior issue. He champions the government’s ABC program for fighting AIDS (Abstinence, Be Faithful and, if you must, use a Condom).

In his official Easter message of 2014, he urged the public to change their behavior to avoid catching HIV/AIDS.