A young transgender activist in Cameroon has been evicted from her family home because of her gender identity. She is now homeless and needs help. 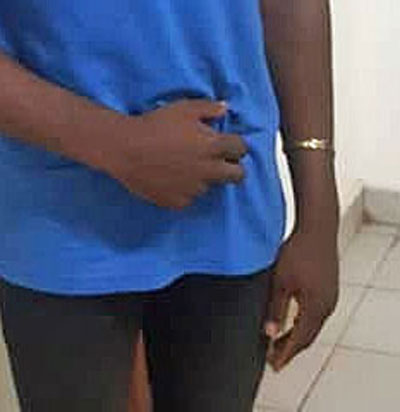 For her security, the photo of Nini does not show her face. (Photo by Courtney Stan)

Trans activist Nini (a pseudonym) lived with her parents until last year while she attended university.

At age 22, she is eager to continue her education, but that might no longer be possible.

Born male, she identifies as a woman and is sexually attracted to men.

In October 2019, she was kicked out of the family home in Yaoundé by her mother after the family realized her gender identity. She pleaded to be allowed to come home, but all doors were closed to her. Her family stopped paying her university tuition.

“I found myself alone without any help. Sometimes I even simulated illnesses to get the family’s attention, but they never wanted to know how I was doing. At that moment, I understood that I could not count on them anymore.

After meeting with a health care provider, I discovered that I was HIV positive. My circumstances became more difficult, because discrimination based on my HIV status was added to the discrimination against my sexual orientation and gender identity.

My studies were stopped for lack of money.

I needed treatment for HIV, but often I couldn’t manage it because my diet was not consistent. I often had dizziness, stomach aches, tiredness, vomiting and other ailments. For a while I had to stop taking my ARVs because, without a good diet, the drugs were threatening my health.

Despite all those problems, I could not get through to my family. I had become persona non grata.

For the past four months, I have been living without a fixed address. I spend the nights with friends when the opportunity arises. I need help to get a small room and start a business where I can earn money, eat and follow my doctor’s orders.

Nini has been working with a local trans advocacy group, but in Cameroon it is not easy for transgender people to find a job and earn a decent living.