The latest report on homophobic and transphobic violence in Cameroon paints a grim picture of a rising tide of violence against LGBTI Cameroonians, but with one bright spot — a drop in arbitrary arrests by police. 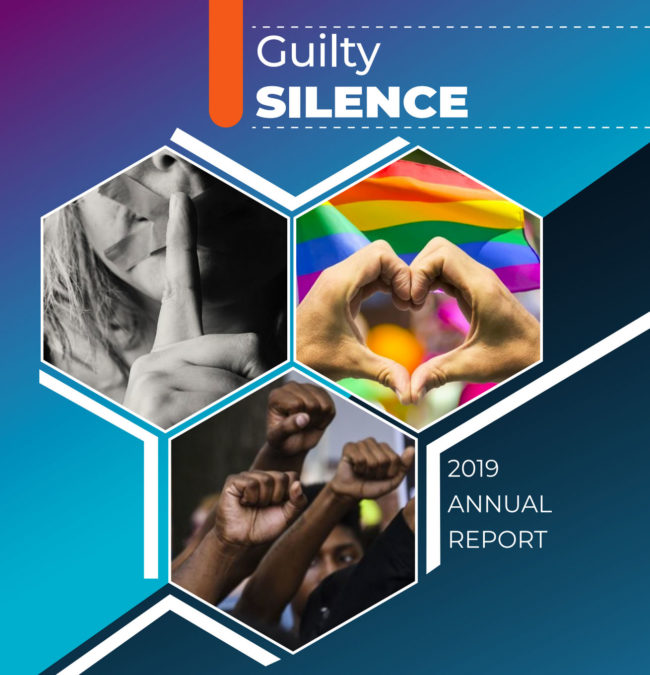 Cover of the “Guilty Silence” report about violence against LGBTI Cameroonians in 2019.

For too long, Cameroon has allowed violence against LGBTI people to go unpunished and often even unnoticed, say the two activist groups that compiled and published the latest annual report on anti-LGBTI violence.

Humanity First Cameroon and Alternatives-Cameroon stated: “We must break this ‘Guilty Silence’ if we really want to curb the phenomenon of violence and violations of the rights of sexual and gender minorities in Cameroon.”

In their report on violence and violations of the rights of LGBTI people in Cameroon during 2019, they found:

To an unknown degree, the increase in reported violations is a result of improved tracking of human rights abuses by LGBTI advocacy orgranizations.

The 2019 report, created by Humanity First and Alternatives-Cameroon in collaboration with other local LGBTI advocacy organizations, gave specific examples of anti-LGBTI violence such as the arrest of a trans woman in Douala. (The account below uses the pronoun “he” although the victim was a trans woman):

[The victim] suffered an arbitrary arrest coupled with psychological violence orchestrated by forces of law and order who arrested and stripped him to identify his sex under the pretext that he disguised himself as a woman in order to swindle and rip off men in nightclubs and snack bars. Then they took pictures threatening to post them on social networks and other media in the city.

Thanks to the intervention of Alternatives-Cameroon, this action was stopped. We were able to put our strategies and our financial means at stake to get him out of cell of the Ndogbong gendarmerie company. Given his poor health status, we brought a doctor to consult but this was opposed by the Lieutenant. After his release at around 5:30 pm, the survivor was provided with the necessary medical and psychological care at the Access Centre of Alternatives – Cameroon. 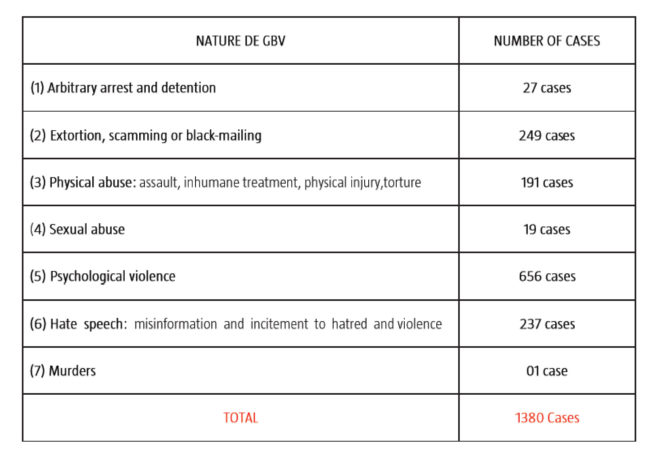 Chart in the report “Guilty Silence” lists the variety of violent abuses suffered by LGBTI Cameroonians in 2019.

Another example of human rights abuse was the following tale of a victim who paid 50,000 CFA francs (about $84) in order to be freed by anti-gay kidnappers:

The survivor (MAYA0498) met someone on social networks (Facebook). They then had a date at 9pm after which he went to the home of his date where he will unfortunately be tortured. A few moments later, the executioner proposed him to have sex. They both agreed and as they were preparing themselves to start they were surprised by a group of people who forced their way into the room.

They accused him of drawing their kid brother into homosexuality. They then started to beat him up, took his phone and compelled him to enter his Orange [telecom] money security code so as to clear his account. That is how they withdrew CFA F 7000 from his Orange money account.

They then called the survivor’s contacts saying that he has been kidnapped and that the kidnappers are asking for a CFA F 50 000 transfer to his account in order to let him go. He was finally released around 1:00 am only after the ransom have been paid.

This chart in the report “Guilty Silence” shows the increase in human rights abuses suffered by LGBTI Cameroonians from 2012 through 2019.

1. Decriminalize same-sex relationships by repealing article 347-1 of the Penal Code;
2. Immediately stop forced anal examination of homosexuals in accordance with the Convention Against Torture ratified Cameroon;
3. Repeal Article 83 (1) and (2) of Law 2010 on Cyber Security and Cybercrime;
4. Guarantee protection for LGBT rights activists by providing them a legal status at the Cameroon Human Rights Commission ;
5. Continue the fight against stigma and discrimination against LGBTI in public services including justice and health;
6. Take into account gender aspect when drawing up official certificates and documents;
7. Take into account violence against LGBTI and their activists in annual reports on human rights violations in Cameroon

Overall, the human rights situation has worsened in recent years because of the rebellion in the English-speaking section of the country and the war in the north of the country against the terrorist group Boko Haram. Against that background, sexual and gender minorities across the country are often doubly victims not only of violence but also of their vulnerability to HIV.

Humanity First Cameroon and Alternatives-Cameroon said they will spare no effort to make the ideal of respect for human rights into a reality. They stated:

“We keep the secret hope of living in a society where difference will no longer be a problem and where the notion of ‘humanity’ will take on all of its meaning and power.”