LGBT-rights and right-to-health advocates in Uganda have launched a coalition to focus specifically on access and availability of AIDS-fighting condoms in the country. 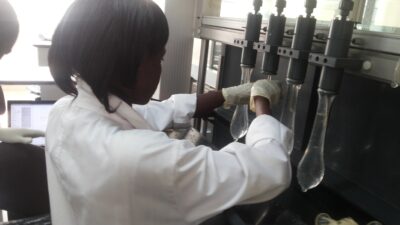 A worker at Uganda’s National Drug Authority checks the safety of condoms before they are allowed on the market. (UhspaUganda photo)

Condom use has declined in Uganda, especially among rural populations, according to a new assessment of condom supplies and funding gaps in Uganda. The study was commissioned by the AIDS Healthcare Foundation (AHF).

The condom coalition, consisting mostly of health rights and key populations activists, will work closely with the Uganda Coalition on Access to Essential Medicine, a group of over 45 organisations focusing on availability, affordability of essential AIDS-fighting medicines and supplies in Uganda.

A steering committee of six people is leading the work of the condom coalition.  Top on the coalition’s priorities will be ensuring close consultations  with government and civil society to ensure that a new condom strategy to overcome structural barriers to condom use is developed. The country’s previous condom strategy expired in 2015.

Ms Alice Kayongo, the AHF’s regional policy and advocacy manager for the East/West Africa Bureau & Malawi, said last week in Kampala that the coalition will work to remove hurdles to maintaining accessible and affordable condom stocks in the country.

Ms Kayongo wants condoms to be seen as a lifestyle tool, not a symbol of adultery or promiscuity. However, this approach faces strong resistance from many U.S. evangelical Christian groups with influence on the U.S. government’s support for Uganda’s national HIV response, including the controversial Rev. Scott Lively. They want a morality-based approach, which seeks to reduce the spread of HIV through the promotion of abstinence. The failure of that approach led to a reversal of Uganda’s achievements in combatting HIV, as earlier discussed on Erasing 76crimes. 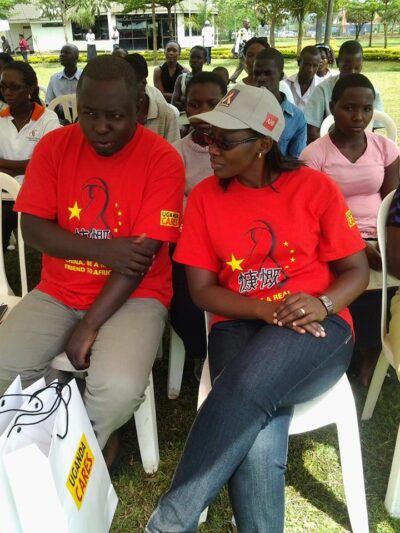 Dr Dennis Kibira, who led the new condom study, told the advocates meeting that condom use is still seen as a moral issue.

“Having a condom is seen as someone is going to commit adultery. It’s an underlying issue to consumers,” he noted.

Condom use in Uganda increased in 2000 to over 40% under the ABC strategy, which promotes a combination of Abstention, Being faithful, and Condom use).  But in 2018 that rate had slipped to 24%.

Ms Winnie Ilkilai said policies need to address the low rate of condom use among women. She said social pressures lead women to think that carrying condoms is unacceptable. 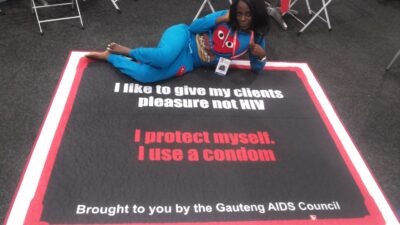 Findings of the condom study

■Lack of country specific data on condom consumption is a key challenge to quantification of need. Currently demographics estimates are used for procurement decisions. However, it was mentioned that UNPFA has introduced a quantification tool.

■The last Condom Strategy ended in 2015 and efforts to renew the strategy have not yet yielded results.

■National Condom Coordination Unit (NCCU) is not under the official structure of public service and therefore cannot be resourced by the government and relies on donor support.

■The NCCU does not have approved terms of reference, which jeopardises work.

■The National Condom Coordination Committee  is at the moment a sub-committee of the AIDS Control Programme (ACP) and therefore the focus is on condom use for risky sex behaviour and less for contraception.

■The ACP gives restrictive guidance for condom advertisement in the media. Condoms are seen as a preventive mechanism and not a lifestyle tool for consumers.

■It is envisaged that condoms should be placed at all work places but a national workplace policy has not yet been operationalized.

■All condom procurements are supported by donors. The commitment made by Government to provide a 5% matched funding to the Global Fund has never been met. 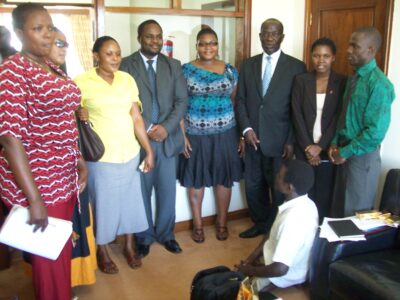 Uganda’s Vice President, Edward Kiwanuka Sekandi (third from right, back row), after a meeting with activists representing sex workers and brothel managers in Kampala while he was still speaker of Ugandan parliament. The activists demanded access to HIV supplies, including condoms. (UhspaUganda photo)

■Respondents reported long lead times of up to a year from order to product being on the market.

■Commercial importers reported being crowded out by high margins and volumes of subsidized/ socially marketed condoms.

■The public need for condoms is not known. National forecasts are based on estimates and are not coordinated. DHIS2 data is not readily available to users particularly in commercial sector.

■Although NDA capacity for post-shipment testing has improved over the last two years from three months to 4-6 weeks, this was said to still be insufficient.

■Post shipment condom testing fees  are USD 200 per batch. A typical consignment may have 250-500 batches. This fee is met by the donors plus any other handling fees. These added costs impact on access to condoms. 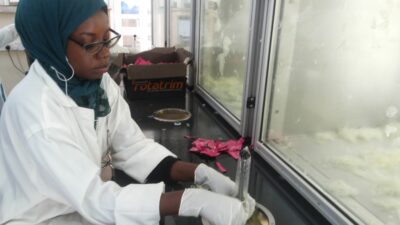 ■There is pilferage from public sector to private sector and subsidized/socially marketed condoms are available to all segments of the market and yet they are meant for those in the low socio-economic segments. This distorts the market.

■ADS envisaged warehouse transfers to balance condom distribution across sectors and facilities, but this seldom happened especially at the national level, leaving empty shelves in one sector and over-supply in another.

■Most of the public sector self-condom dispensers are displayed in open space and this exposes the condoms to direct sunlight and heat, which may affect the quality of the condoms.

■Condom demand is low at public health facilities, as evidenced by expired condoms at these outlets.

■Post market surveillance for condoms is not funded and therefore the integrity of condoms through the supply chain is not checked. 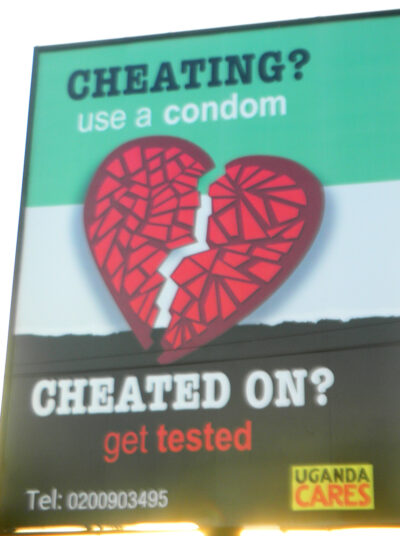 ■Condom outlets are not open 24 hours a day during the week.

■Government’s supply of free condoms is irregular and limited as condoms are distributed at public health facilities.

■Commercial brands are reportedly expensive. The cost of a three-piece packet of the socially marketed brands ranged between UGX 500-2000 and UGX 4000-9000 for other commercial brands.

■Inconvenience while purchasing condoms caused by lack of privacy, fear, embarrassment and stigma at condom outlets present a big hindrance to condom access.

■Sometimes female sex workers engage in unprotected sex if the sexual client is willing to part with the more money.

■There is limited consumer information on condoms, which leads to myths and misinformation regarding condom.

–For example: ‘it is considered a bad omen for men to carry condoms before meeting a woman for a sexual encounter because this will automatically result in them (men) not getting the lady one was scheduled to meet.

–Women who carry condoms may be viewed as promiscuous by their sexual partners.

–Information on where to obtain condoms, especially at night, is not publicly known.

■Respondents reported that few workplaces had condom dispensers and the location of many of the dispensers was not ideal. 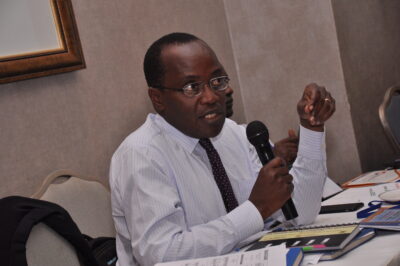 ■National ownership of condom programming is important. Achieving it will necessitate support from the Ministry of Health (MoH) budget and reduction of donor dependency.

■Policies and governance structure for condom programming should be strengthened.

■To improve needs forecasting, procurement and use, there is need to strengthen condom information capture, reporting and use.

■Accountability and reporting on condom programming should be emphasized across all levels of the supply chain.

■The Total Market Approach policy should be implemented to ensure all socio-economic segments of the population benefit.

■MoH and donors should invest in public education and training on consistent condom use as a lifestyle.

■Consumer level feedback and research should be done to improve programming.