Arrest warrants have been issued against two Ugandan officials who repeatedly ignored orders to appear in court to answer charges of torturing LGBT youths.

Hajji Abdul Kiyimba, the mayor of Kyenrega municipal council, talks to the media during the March 29 raid by police and army that he led against the Cosf Uganda homeless shelter. (Screen shot of BBstv footage)

The arrest warrants came in the case of 20 LGBT Ugandans who spent 50 days on remand in a Ugandan prison on charges of violating Covid-19 orders by living in a homeless shelter run by the Children of the Sun Foundation (COSF). After their release, they accused Ugandan officials of mistreating them during the March 29 raid on the COSF shelter and during their incarceration.

The warrants were issued against Haji Abdul Kiyimba, the LCIII chairperson of Kyengera Town Council,  and Philemon Woniala, the deputy officer in charge of Kitalya Mini-Maxi Prison, for repeatedly failing to appear in court to answer charges of torturing LGBT youths.

The warrants were approved 14th October during a court session presided over by the Chief Magistrate of the central District of Wakiso, which is just outside the Ugandan capital, Kampala.

Kiyimba and Woniala had been summoned to attend court on 26th August and again on 14th October, according to a statement issued by Human Rights Awareness and Promotion Forum (HRAPF). They face charges of violating Sections 2 and 4 of the Prevention and Prohibition of Torture Act.

“The two accused persons, however, chose to ignore the Court Summons and never appeared personally in Court to answer to the charges, which conduct amounts to contempt of Court,” stated Patricia Kimera, HRAPF’s Programmes Director for Access to Justice.

On 21st July, HRAPF and members of COSF filed a suit against the duo for subjecting LGBT youth to acts of torture, cruel, inhuman and degrading treatment during their arrest and eventual detention at Kitalya Mini-Maxi Prison. 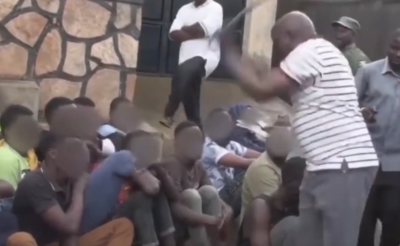 Abuse of members of the Children of the Sun homeless shelter, who were arrested on charges (later dismissed) of violating Covid-19 lockdown orders early in the pandemic. Hajji Kiyimba in striped t-shirt beats the youths. (Screen shot from “In the Eyes of a Pandemic”)

Last week, Haji Abdul Kiyimba sent his personal assistant to appear for him in Court, but the Chief Magistrate refused to allow anyone but Kiyimba or his legal representative to take part in the hearing because criminal liability is personal.

The HRAPF legal team asked the Court to issue the arrest warrants, given the men’s previous record of non-appearance. The Chief Magistrate issued the warrants and the case was adjourned to the 25th November.

“We welcome the gesture by the Chief Magistrate of Wakiso in reiterating that criminal liability is personal and that culprits ought to respect Court summons no matter their stance in public. HRAPF pledges to do all that is possible to ensure that our clients attain justice,” Kimera said.

She noted that, going forward, HRAPF will follow up with the Court to ensure that arrest warrants are extracted and the duo is arrested to answer the charges against them. 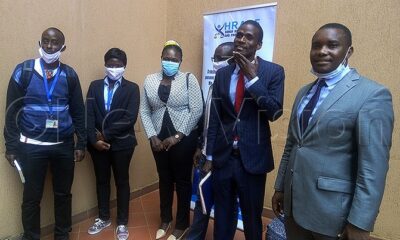