Activists fighting against AIDS and for human rights in Uganda are pushing to reverse the decision to move next year’s African AIDS conference out of Uganda because of recent political unrest. 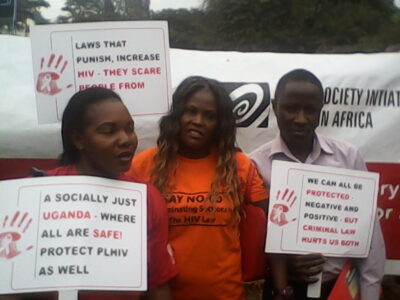 The sponsors of the African anti-AIDS conference ICASA decided earlier this month to move the gathering elsewhere in response to a petition by human rights activists in Kenya and South Africa.

Society for AIDS in Africa (SAA), which organizes the International Conference on Aids and Sexually Transmitted Infections in Africa (ICASA), decided to cancel Uganda’s hosting rights because of recent police violence.

“Without peace, security, and a conducive environment for all, we have no option but to revoke the hosting rights of Uganda,” SAA declared.

Nineteen civil society organisations (CSOs) in Uganda wrote to the SAA on Dec. 11, urging a reversal of that decision. They asked for consultations with stakeholders, including the Ugandan government, Ugandan civil society and Ugandan people living with HIV, or PLHIVs.

In planning for ICASA, they wrote, they:

“Hoped to seize the moment to call upon our government to increase its momentum and leadership on HIV and human rights, we planned campaigns in which we hoped that the civil society all over Africa would stand with us in solidarity to march the streets of Kampala to revive the spirit of community, activism and to galvanise this moment to call for demolishing barriers that still impede access of quality HIV care for all key groups.”

The conference is still scheduled for Dec. 6-11, 2021. No new location  has yet been selected.

The activists’ letter, with endorsing organisations, is reproduced verbatim below:

The International Conference on AIDS and Sexually Transmitted Infections in Africa (ICASA) is a major bilingual international AIDS conference which takes place in Africa. The 21st ICASA (2021) hosting rights were duly awarded in 2019.

Uganda and the HIV Community had escalated mobilization and was looking forward to working with global partners to deliver a tremendous conference that highlights the diverse nature of the African region’s HIV epidemic and the unique response to it until the SAA revocation notice. Civil Society, KPs [key populations most at risk of HIV], PLHIV, and young people in Uganda are saddened by SAA’s decision to revoke Uganda’s rights to host ICASA 2021. Civil society acknowledges that the current presidential campaign has been marred with high levels of violence 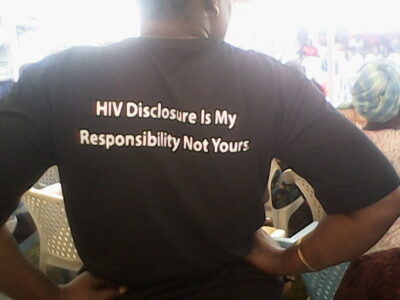 A Ugandan activist displays a message about mandatory disclosure in Uganda’s HIV/AIDS Prevention and Control Act . Activists are contesting sections of the act that they consider unfair in the constitutional court. (UhspaUganda photo)

We see it [violence], we shun it. We have not only spoken against it but have actively mobilised our communities and have called upon the government to put in place lasting peace solutions in this electoral period. We also accordingly acknowledge that the increasing incidence of Covid-19 cases in the country have further fueled the security concern with police failing to balance citizen’s liberties to participate in the electoral campaign versus the need to control large public gatherings.

We note that all peace actors are highly engaged in this discourse and the country is returning to normalcy. Government has called upon strict punishment for the perpetrators of violence, including members of the police institution. With this, we are optimistic Uganda will be safe to host ICASA 2021 and incidents of the past weeks should not spell a lasting verdict to cause the withdraw of the Uganda ICASA hosting rights. Tremendous efforts from different sectors; government, CSOs, PLHIV, Faith-based organisations, key populations and young people was exhibited through a very competitive process to ensure Uganda won the bid to host ICASA 2021.

Over the past one year, civil society groups in Uganda have been working hard and have demonstrated deep commitment to the conference since the hosting award was announced. More importantly, we the community of HIV actors hoped to ride on the shoulders of ICASA 2021 to revolutionize our own Ugandan AIDS response. We hoped to seize the moment to call upon our government to increase its momentum and leadership on HIV and human rights, we planned campaigns in which we hoped that the civil Society all over Africa would stand with us in solidarity to march the streets of Kampala to revive the spirit of community, activism and to galvanise this moment to call for demolishing barriers that still impede access of quality HIV care for all key groups.

To know that, without a fault of our creation, this has been stripped away so easily, without any dialogue, without according us a chance to table our plight, we are taken aback and fully disfranchised. We appeal to the Society of AIDS in Africa to reconsider this position because whereas its security concerns are valid, they are also temporally and evolving, yet the consequences of the ICASA 2021 withdrawal are depriving/ disfranchising for communities living with HIV, key population groups and young people that hoped to obtain tools, science and the evidence to increase their lease to life to a platform for the visibility and acknowledgment of their struggles and celebration of their potential at the ICASA 2021. We call upon the African and international comrades to stand with us and condemn the decision to revoke Uganda’s right to host ICASA 2021. 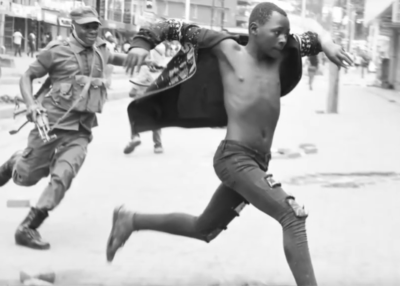 Harsh enforcement of Covid-19 lockdown rules in Uganda. (Screen shot from “In the Eyes of a Pandemic”). Uganda security forces have long been accused of brutality and human rights abuses.

The Uganda CSO constituency highly condemns all human rights abuses against the citizens of our country. The CSOs engaged in fighting HIV in Uganda call upon all African CSOs to stand with them at this critical time. We are hopeful that the situation would calm down after the Presidential elections slated for January 14, 2021.and will remain calm throughout the ICASA preparatory period. In addition to ICASA being used as a platform to share, advocate for new science, and best practices affecting the HIV response in the continent it will also be used to condemn human rights violations. We call upon the donors, government, CSOs PLHIV, key populations and young people in Africa, globally to join us address the on-going challenge. In addition to the combined front we have put up across the continent to address human rights abuses against Key Populations, we now hope to use ICASA as a platform along with other players to condemn the current human rights violation in Uganda.

Revoking Uganda of the right to host ICASA 2021 will not make the situation in the country better; on the other hand, by revoking the award, we feel that you have abandoned communities – with no advocate, no voice, and no solidarity. We have made progress on HIV, because we stood together as one global community, especially in Africa – for Africans! Not now, SAA. Not now, should the African community abandon Uganda to its woes, leaving PLHIV, Key populations groups, Young people locked from a continental space that was in their sight a week ago. We sincerely hope that you can consider our appeal. As the Civil Society fraternity in Uganda, we were proud of ICASA happening here and we are optimistic the decision to revoke our right to host ICASA2021 will be reversed. We believe that the conference is an important African opportunity to hold our leaders accountable and to put them to task to demonstrate to the global community that we can do better. As Civil Society we join the rest of Ugandans in celebrating Uganda’s achievements in hosting ICASA 2021.

This opportunity renews our commitment with re-invigorated efforts to increase coordination and networking amongst us, strategic and focused partnership with government and  private sector, and engaging innovations that will collectively lead us to a Ugandan society free of HIV and AIDS and its impact. As we continue struggling with numerous human rights violations just like many other African countries, we require a lot of support from the global community to improve the situation. We urge all civil society actors to sustain efforts in holding our leaders accountable to the commitments they made in observing the basic human rights of all people living in Uganda. It’s our prayer that decision to revoke Uganda’s right to host ICASA2021 be reversed and due process is undertaken by SAA to consult different stakeholders; government, civil society and PLHIV to inform their decision.

For God and Our Country Signed:

5. Alliance of Mayors and Municipal Leaders on HIV/AIDS in Africa (AMICAALL)

A man begs for his life during last month’s riots in Kampala, during which police were accused of using excessive force. (Photo courtesy of Aljazeera)