African prisons often are hotbeds of homophobic violence, but that hasn’t been the experience of seven Senegalese men convicted in November on homosexuality charges. Treated respectfully by at least two prison officials, last month they also met with LGBTQ rights advocates who visited them in prison.

This article is based on the collective’s report about the visit, during which the activists provided moral support while delivering food and medicines for the prisoners.

The collective’s manager of victims in the Dakar area made arrangements for the visit with a Sebikhotane prison official, the head of the prison infirmary.

Three members of the collective met with him, his deputy and the seven inmates.

Souleymane Diouf (pseudonym), a leader of the Free Collective, stated:

“When we arrived at the prison, the detainees greeted us with smiles on their faces. They were ​​happy, as if they had shed a heavy burden.

“They told us that the prison at Sebikhotane was more welcoming, peaceful, clean and spacious than the Cap Manuel prison where they were previously held.” 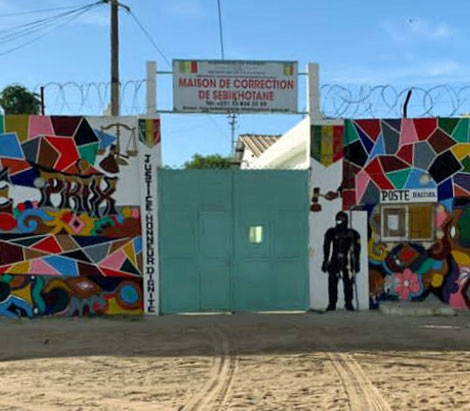 During the meeting, the prison official assured the prisoners that, for their safety, their sexual orientation had not been disclosed to other inmates. Because of his professionalism, he said, he would not divulge that information to others.

Diouf similarly advised the prisoners to be careful not to disclosure their sexual orientation to other inmates.

The official praised the visitors both for bringing packages of food to the prisoners and for working to combat stigmatization and discrimination against LGBTQ+ people.

He also agreed to serve as an intermediary between the prisoners and the Free Collective.

The collective donated boxes of anti-retroviral therapy medication for use by prisoners who are HIV-positive.

The Free Collective is seeking financial and technical support to provide:

People and organization wishing to provide financial support to the Free Collective can write to [email protected].