Hope for change in Tanzania after death of homophobic president

Human rights activists expressed hope for change in Tanzania now that former vice president Samia Suluhu Hassan has been sworn in as the country’s first female president after the death of homophobic president Dr John Magufuli. 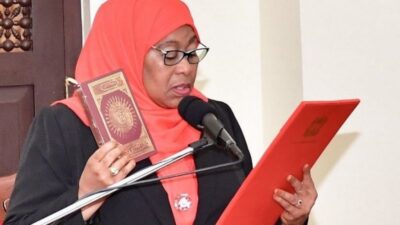 Samia Suluhu Hassan holds the Quran as she takes the oath of office as Tanzania’s new president. (Photo courtesy of Ikulu)

Magufuli died March 17, 2021, leaving behind “a legacy of repression and serious human rights abuses,” in the words of the Human Rights Watch (HRW) advocacy organization.

He was 61 years old. Hassan  announced his death March 17 in Dar es Salaam, saying it was due to  heart complications.

Magufuli had been a firm denier of the existence of Covid-19. He disregarded safeguards against protecting his country from the pandemic. Hassan has not indicated whether she would continue that policy.

The new president will finish Magufuli’s second five-year term, set to run until 2025.

Human rights activists see her swearing in as a new hope to put Tanzania back to the path of respect for human rights and democratic values.

“Over the past six years, President Magufuli oversaw abusive laws and policies that seriously undermined human rights in Tanzania,” said Otsieno Namwaya, East Africa director at HRW. “The new government now has a chance for a fresh start by ending problematic past practices.”

Hassan made a brief speech after she took the oath of office, stating, “I can assure Tanzanians that there is nothing that will go wrong during this time. We will start where Magufuli ended.”

“Let us all be patient and unite as we move forward,” she said.

Hassan has not indicated whether she would ease the regime’s repression of political opponents, journalists and LGBT citizens. In the past, she has been restrained in her public statements, although she had not always agreed with Magufuli.

Before Mugufuli chose her as his running mate, she had supported a policy of allowing continued education for girls who became pregnant, but she did not object publicly when he declared that pregnant girls should not be allowed in school.

Magufuli was first elected president of Tanzania in 2015. In October 2020, he won a second term in presidential elections marred by serious human rights abuses, including arbitrary arrests and detention of scores of opposition party leaders and supporters.

HRW noted that, in the weeks ahead of the elections, the authorities suspended television and radio stations, censored mobile phone communication, arrested activists and journalists, and blocked social media. On the eve of elections, police fired live ammunition into crowds on the semi-autonomous island archipelago of Zanzibar, killing at least three people. The authorities continued to threaten and pursue opposition leaders and supporters even after Magufuli was declared the winner of the October vote. 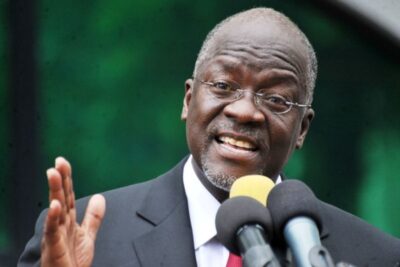 Tanzania authorities’ repression of LGBT rights activism came in the context of government repression of opposition parties, nongovernmental organizations, and the media ahead of the country’s general elections, HRW said.

Crackdowns on LGBT Tanzanians and on advocates for their human rights and health have been ongoing since 2016. The repression gained international notoriety in 2018, when Paul Makonda, the administrative chief of Dar es Salaam, urged the public to report anyone they thought was a homosexual.

Earlier this year, the United States banned Makonda from visiting the country because of  his role in a  crackdown. The U.S. State Department said it was taking the action against Makonda “due to his involvement in gross violations of human rights, which include the flagrant denial of the right to life, liberty, or the security of persons.”

Paul Makonda, the anti-gay Tanzanian official whom the United States banned from visiting the country for his role in a crackdown on homosexuals. (Photo courtesy of The Guardian)

President Magufuli believed that goats, sheep, pigs or cattle are more morally upright than homosexual human beings. He caused  amusement at a public rally during an official speech, asking herders if any of them has ever witnessed a he-goat mounting a he-goat.

President Magufuli also claimed that cows and animals would approve of his strong anti-gay crackdown. The country’s harsh LGBT  crackdown reached a peak in 2018.

The U.S. State Department sanctioned Paul  Makonda, the administrative chief of the Tanzanian capital, “due to his involvement in gross violations of human rights, which include the flagrant denial of the right to life, liberty, or the security of persons.” 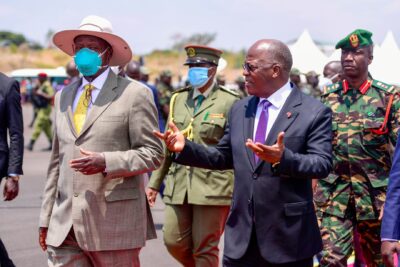 Ugandan President, Yoweri Museveni (with yellow neck-tie) being received by late President John Magufuli in the Tanzanian capital in September 2020.