A US Christian group with ties to a global far-right movement may have influenced the recent push for a draconian bill criminalizing LGBTQ people and their allies in Ghana, CNN reports. Below is an excerpt of CNN’s reporting. Read the full story here. 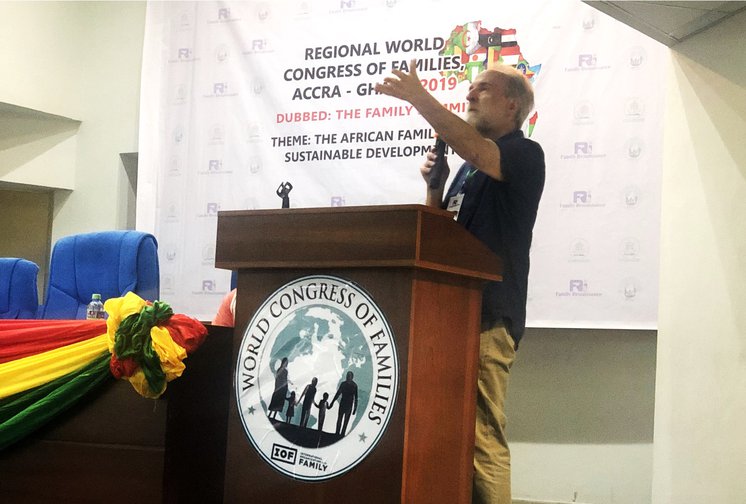 A speaker at the 2019 World Congress of Families gathering in Accra, Ghana. (Photo by Rita Nketiah, courtesy of OpenDemocracy.net)

… Bediako [pseudonym for the leader of Rightify Ghana] says the anti-LGBTQ “family values” coalition has long been a loud presence in Ghana, but that it was never organized or particularly strategic.

He believes that changed when a US group promoting those same “family values” organized a conference in Accra in late 2019 — just before the Covid-19 pandemic hit.

“The US right-wing people were here and after that there was a rush to push legislation,” Bediako says.

The conference was hosted by the World Congress of Families, which Human Rights Campaign, an LGBTQ+ rights group, calls “one of the most influential American organizations involved in the export of hate.”

The 2019 conference was largely organized in response to proposals by the Ghanaian government to create a comprehensive sex education curriculum, to teach young people about the emotional, physical and social aspects of sexuality. This plan was later shelved.

But audio recordings, presentations, and action plans of the meeting, reviewed by CNN, show that much of the conference’s time was focused on the supposed “dangers” of LGBTQ influence, labeling it as a grand left-wing conspiracy out to destroy “family values.”

One of the highlights of the conference, for attendees, was the presence of US ultra-conservative organizer Brian Brown, the president of the World Congress of Families (WCF).

The WCF has curious beginnings: It was founded in the late 1990s as a collaboration between US religious conservatives and right-wing Russians after the fall of the Soviet Union.

But in recent years, the group has become increasingly influential in organizing anti-LGBTQ forces and inspiring policy initiatives, according to Neil Datta, secretary of the European Parliamentary Forum on Sexual and Reproductive Rights.

Datta recently authored extensive research on anti-LGBTQ groups in Europe that included data about the alleged funding of the WCF’s activities.

“The World Congress of Family conferences are like an incubator for bad ideas,” says Datta. “Different religious extremists from different parts of the world meet and exchange ideas and then people take those ideas and expand on it at the national level.”

He says several pieces of legislation and petitions in Eastern Europe appear to have flowed from WCF meetings.

“The fact that the WCF took place in Accra in 2019 and now we have something appearing as a draft bill is not surprising. This draft “Family Values” bill seems to be one more iteration of the homophobic initiatives emanating from their conferences,” he says.

But Brown insists that his organization provides inspiration, not instruction. That inspiration seems apparent when Ghanaians pushing the bill use strikingly similar talking points to Brown’s organization, including a near obsession with the “natural” family as a way to propagate generational Christian conservative values.”