The government of Uganda has been urged to repeal provisions of the law criminalising consensual same-sex relations because they provide legal cover for violations of the human rights of LGBTI persons. 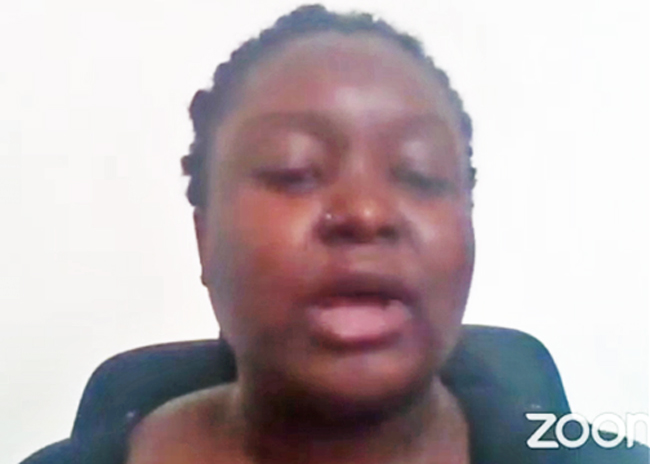 Tracy Ivy Nakayenga of HRAPF presented the appeal to the African Commission on Human and Peoples’ Rights.

The appeal was contained in a statement presented by the Human Rights Awareness and Promotion Forum (HRAPF) at the ongoing 69th Ordinary Session of the African Commission on Human and Peoples’ Rights held in Banjul, The Gambia.

The statement, urging the commission to appeal to Uganda to change its laws and avoid human rights violations, was presented by Tracy Ivy Nakayenga, HRAPF’s advocacy and communications associate.

Nakayenga also called upon the African Commission to urge the government of Uganda to refrain from using the COVID-19 crisis as an excuse to violate the human rights of marginalised and criminalised minorities.

The African rights commission’s session started Nov. 15 and will run through Dec. 5.

Below is the full statement as presented by HRAPF:

Presented at the 69th Ordinary Session of the African Commission on Human and Peoples’ Rights held in Banjul, The Gambia.

Chairperson, Commissioners and all distinguished delegates,

Human Rights Awareness and Promotion Forum (HRAPF) recognises and applauds the efforts by the Government of Uganda to fight the COVID-19 pandemic, particularly the efforts to secure vaccines for the citizens. While Uganda, like many other states, continues to struggle with the impact of the COVID-19 pandemic, there has been a commendable effort to make universal access to the vaccine a reality.

Nevertheless, the COVID-19 pandemic has exposed glaring gaps in the healthcare system in Uganda.

Logo of the African Commission on Human and Peoples’ Rights

The pandemic has exposed the inept public health response mechanisms, particularly in light of the excessive reliance on the military and police forces to manage the response to a major public health concern, leading to egregious violations of the human rights of the poorest and most marginalised of Uganda’s population.

In particular, police and military authorities have throughout the one and a half year period since COVID-19 was first declared a public health threat in Uganda extensively used the guidelines and restrictions imposed to curb the spread of COVID-19 to target and harass unpopular and criminalised minorities, including sex workers, People who use and inject drugs and LGBTI persons. This has magnified the marginalisation of these vulnerable populations in Uganda, who already bear the brunt of the economic hardship resulting from the various lockdowns as well as the crackdowns by law enforcement authorities in a bid to enforce the lockdown regulations.

Of particular concern has been the determined use of the COVID-19 regulations to target criminalised populations such as sex workers and LGBTI persons for mass arrests, including the arbitrary arrest of 23 homeless LGBT youth from a crisis shelter in March 2021 and 44 LGBT persons who were found attending a social event in May 2021 on charges of ‘doing a negligent act likely to spread infection of disease.’ Both incidents clearly targeted the victims because of their presumed sexual orientation and/or gender identity. In both cases, the victims were subjected to cruel, inhuman, and degrading treatment including beatings and for some of them anal examinations.

A total of 388 violations of the rights of LGBTI persons were documented by HRAPF during the year, and yet many more went unrecorded as the lockdown prevented many from reporting the violations against them. These violations clearly go against articles 2,3,4 and 5 of the African Charter on Human and People’s Rights and the state’s obligation to prevent and investigate cases of violence based on sexual orientation and/or gender identity as espoused in Resolution 275 on Protection Against Violence and other Human Rights Violations Against Persons on the Basis of their Real or Imputed Sexual Orientation or Gender Identity.

In addition, the civic space in Uganda has continued to shrink, with the NGO Bureau closing down over 54 NGOs this year and several NGO workers have been arrested and detained on baseless charges, in violation of the right to a fair hearing and the freedom of expression and association guaranteed under Articles 28 and 29 of the Ugandan Constitution and Articles 7 and 10 of the African Charter. This situation has continued to scare and intimidate NGOs working to protect the rights of criminalised minorities.

a) Urge the Government of Uganda to condemn all acts of violence against marginalised persons and hold all perpetrators of human rights violations accountable.

b) Urge the Government of Uganda to refrain from using the COVID-19 crisis as an excuse to violate the human rights of marginalised and criminalised minorities.

d) Urge the Government of Uganda to decriminalise and declassify vague and undefined petty offenses such as ‘doing a negligent act likely to spread infection of disease’ and clearly define the prohibited conduct as well as adopt alternative non-custodial punishments for petty offenders in order to decongest prisons and reduce the risk of COVID-19 infection.

I thank you, Chairperson.

Joto La Jiwe, the author of this article, is a Ugandan correspondent for the African Human Rights Media Network and a member of the Uganda Health and Science Press Association. He writes under a pseudonym. Contact him at [email protected].com.