Ghana’s president says that all types of discrimination must be eliminated before AIDS can be conquered. However, Ghana’s parliament is still considering discriminatory legislation labeled “the worst anti-LGBTQ bill ever”.(See details of the bill below.) 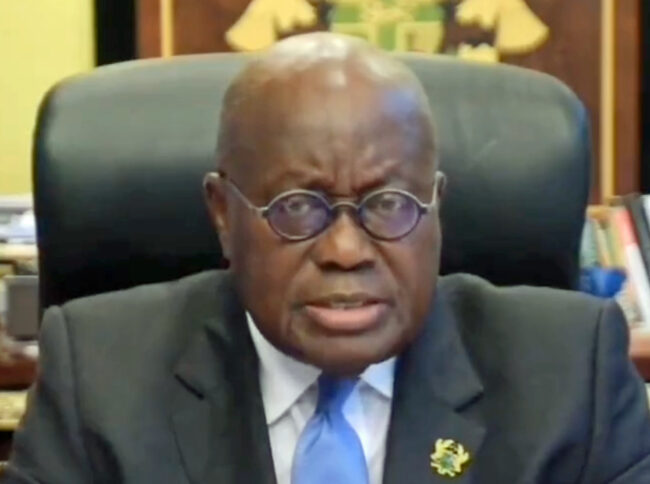 “For us to end AIDS, we must eliminate inequalities and discrimination in every form.”

“Gender inequality, stigma and discrimination associated with populations of higher risk of HIV prevent people from accessing prevention and treatment services,” he stated.

He particularly focused on how gender inequality leads to higher rates of AIDS among women and girls.

In response to his proclamation, the LGBTQ rights advocacy group Rightify Ghana called on Akufo-Addo and members of parliament “to reject the far-reaching anti-LGBTQ bill, because it would worsen existing ‘structural inequalities’ that continue to prevent key populations from accessing HIV services.”

Passage of the bill would “make it impossible for LGBTQI+ community-led organisations to exist and to offer effective HIV services,” Rightify Ghana stated.

DETAILS OF THE ‘WORST ANTI-LGBTQ BILL EVER’

The proposal — formally known as the “Proper Human Sexual Rights and Ghanaian Family Values Bill” — would apply to a broad range of people. In the words of the bill, its targets are “LGBTTQQIAAP+ persons”, which includes lesbians, gays, bisexuals, transgender and transsexual people, and queers, but also allies, pansexuals, people questioning their sexuality, and any “person of any other sociocultural notion of sex or sexual relationship that is contrary to the sociocultural notions of male and female or the relationship between males and females”.

It also would criminalize people “involved in the promotion of, propagation of, advocacy for, support or funding of LGBTTQQIAAP+” and any person “who provides or participates in the provision of sex or gender reassignment, surgical procedure or any other procedure intended to create a sexual category other than the sexual category of a person assigned at birth except where the procedure is intended to correct a biological anomaly including intersex”.

Those acts would be defined as felonies subject to a sentence of three to five years in prison.

That punishment would apply not just to activities but also to people who are (in the wording of the bill, anyone who “holds out as”) LGBTQ, an ally or non-binary.

“Public show of amorous relations” between people of the same sex would be a misdemeanor, punishable by a prison sentence of six months to one year, as would cross-dressing with intent to engage in sex.

The location of Ghana in West Africa

Participants in same-sex weddings would be subject to prison terms of one to three years.

People advocating LGBTQ rights in person or through the media — seeking “a change of public opinion towards an act prohibited under this Act” — would be sentenced to five to 10 years in prison, as would people providing them with financial assistance.

“Homophobes in Ghana always make the claim that LGBTQ persons are actively recruiting persons to be LGBTQI. As a result, these sections will criminalize such activities. For example, you talking to someone or holding a meeting could be considered as such,” Rightify Ghana stated.

The bill would amend Ghana’s extradition law so LGBT Ghanaians seeking asylum abroad could be extradited back to Ghana for prosecution.

The bill would require Ghana residents to report LGBTQ rights advocacy or homosexual activity to police, political leader or “opinion leader”. Specifically: “A person in whose presence an offence is committed under this Act shall report the commission of the offence to a police officer, or in the absence of a police officer to a political leader, opinion leader or the customary authorities of the community in which the offence is committed.”

The bill would promote the harmful and ineffective practice known as “conversion therapy”, which attempts to turn LGBTQ people straight. “LGBTQ persons may be coaxed to accept such harmful activity without knowledge on its dangers,” Rightify Ghana stated. The Ministry of Chieftaincy and Religious Affairs would regulate conversion therapy service providers.

The bill’s sponsors “attempt to present a section that prohibits abuse and violence against accused LGBT persons. As if they care about people,” Rightify Ghana commented.

Specifically, the bill would make it a misdemeanor to “verbally or physically” abuse, assault or harass “a person accused of an offence under this Act; or suffering from any gender or sexual identity challenge including LGBTTQQIAAP+ or any other variant of a sexual identity challenge.” Such abuse would be a misdemeanor punishable by six month to three years in prison.

LGBTQ rights advocates believe that the language of the bill was drafted by anti-gay crusaders abroad.

“It is clear that this an imported bill with a signature of World Congress of Families (WCF),” Rightify Ghana stated. “It is a combination of bills from Russia, Uganda, Nigeria and other places where the WCF have been.

“It’s the worst anti-LGBTQ bill ever.”

The full text of the “Proper Human Sexual Rights and Ghanaian Family Values Bill” is here. The bill extends from Pages 25 to 49 of that document after a 24-page introduction by the bill’s sponsors. The document was compressed for uploading, which introduced some formatting errors.