LGBTI activists live in fear amid renewed protests in Sudan

Queer activists in Sudan say they’re living in fear after police on Monday fired tear gas at protesters during renewed pro-democracy protests seeking an end to the country’s political deadlock. 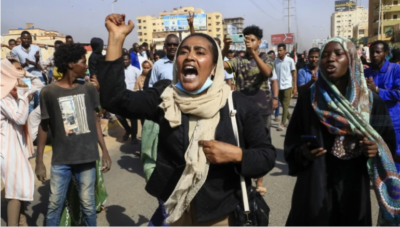 Sudanese protesters marched in the capital, Khartoum, to denounce the army’s overnight detentions of members of Sudan’s government on Oct. 25, 2021. (Photo courtesy of Al Jazeera)

Daily life in Sudan has been disrupted by ongoing protests in which pro-democracy groups demand that the military should not be part of the government, arguing that the army cannot be trusted to lead the transition to democracy.

“Internet partially back……arrests still going on,” according to an update from a Sudanese gay rights advocate (name withheld for security reasons).

A trio of Sudanese LGBT human rights organizations released a statement  last month, condemning the recent coup and calling for international support for the democratic transition in the northeast African country.

An Al Jazeera correspondent in Khartoum reported that Sudanese police fired tear gas Monday at protesters, who rallied near the presidential palace in the capital, Khartoum, to voice their anger against a military deal that re-instated Prime Minister Abdalla Hamdok.

Reports note that thousands of people took to the streets in Khartoum and other Sudanese cities on Monday as part of relentless demonstrations against the October military coup and a subsequent deal that has allowed the military to remain part of the transitional council formed in 2019 after the overthrow of longtime President Omar al-Bashir.

General Abdel Fattah al-Burhan dissolved the military-civilian Sovereign Council on Oct. 25 that had been set up to guide the country to democracy. At the same time, he declared a state of emergency across the country. 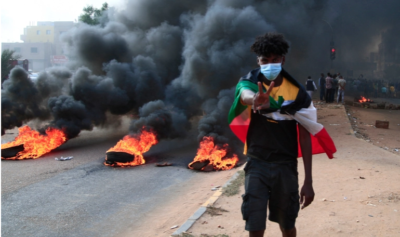 A Sudanese protester draped with the national flag flashes the victory sign next to burning tires during a demonstration in the capital, Khartoum, on Oct. 25, 2021, to denounce overnight detentions by the army of members of Sudan’s government. (Photo courtesy of Al Jazeera/AFP)

Mass protests and international condemnation against his move forced al-Burhan, who is also the head of the governing council, to reinstate Hamdok last month. He also promised to hold elections in July 2023 and hand over power to an elected civilian government. But pro-democracy groups, which were at the forefront of the uprising that toppled al-Bashir, have criticised the deal to reinstate Hamdok. They have said the military should not be part of the government as they can not be trusted to lead the transition to democracy.

LGBT rights activists have been supporting the pro-democracy protests in hopes that a new government would recognize the human rights of LGBT people.

Last year, the Transitional Legislative Council passed a series of bills amending the Criminal Code to protect fundamental rights, including eliminating the death penalty and flogging as punishments for consensual same-sex intercourse, giving LGBT activists hope that full decriminalization might follow. At present, however, Sudanese law still provides for prison sentences of up to seven years for a second sodomy conviction and a life sentence for a third one.

This week, protesters in Khartoum waved Sudanese flags and chanted “civilian is the people’s choice” as well as “the people are stronger.”

Local Sudan media are reporting that on Wednesday al-Burhan said he was determined to carry out the democratic transition and to not withdraw his decision to dissolve the civilian-led government, which was formed in line with a constitutional declaration of August 2021 signed with the Forces for Freedom and Change (FFC).

“The way out of the current crisis is the political agreement signed with the Prime Minister and the corrective measures that preceded. There is no going back on the measures that have been taken until the democratic transition is completed, ” he said at a military graduation ceremony at Nimeiri Higher Military Academy.

He further pointed to ongoing efforts to finalize a political declaration that includes all political forces except for the National Congress Party of the ousted Omar al-Bashir. 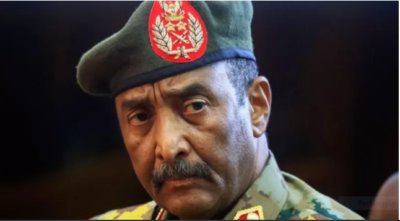 LGBT advocacy groups Bedayaa Organization, Mesahat Foundation and Shades of Ebony have condemned the coup and expressed concern that military rule will expose queer Sudanese people to increased risk of persecution and violence. They stated:

“As LGBTQI groups we are fully aware that the current political conflict and the military repression put the underprivileged individuals such as LGBTQI+ and gender non-confirming people under persecution and discrimination; this also puts them at a higher risk of physical and sexual abuse. We also know for a fact that gaining rights and fundamental freedoms for sexual and gender diversities will not exist under hegemonic military domination and oppression.”