For gay Ugandans, no tears at death of repressive homophobe Simon Lokodo

Simon Lokodo, an energetic and persistent persecutor of the Ugandan LGBTI community, died Jan. 29 in Switzerland — a demise that was greeted with bitter rejoicing by a number of human rights supporters. Among them was outspoken LGBTI ally Stella Nyanzi, who promptly stated, “May you rot in hell for your homophobia.” 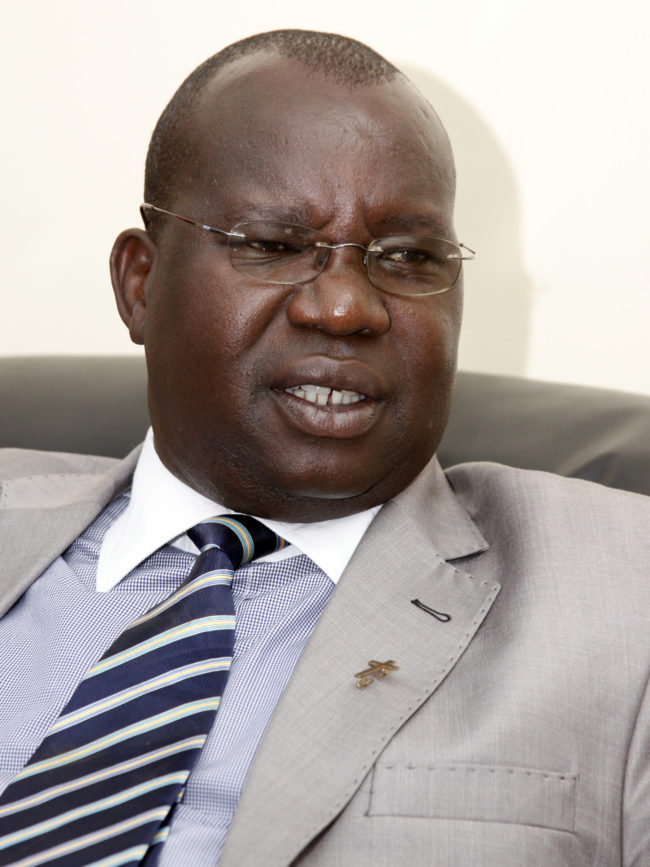 Nyanzi, who fled from Uganda earlier this month over fears of government persecution, arrest and torture, quickly published what she called a “eulogy” to Lokodo in which she declared, “I join Uganda’s homosexuals to celebrate his death.”

Lokodo, who had been a government minister starting in 2009, never hid his hatred for the LGBTI community. As a repressive champion of conservative morality, he also stated that women wearing miniskirts should be arrested.

A former priest, Lokodo was a member of parliament from 2006 until January 2021, when he lost his seat to a challenger.

In 2012, he and the police raided and shut down a gay activist workshop. He was quoted as saying, “I have closed this conference because it’s illegal. We do not accept homosexuality in Uganda.”

When Sexual Minorities Uganda (SMUG) took the matter to court, the judge ruled in favor of Lokodo.

In 2017 and 2018, on his watch, the Ugandan government broke up eight gatherings of the LGBTQ community.

Even when events were held on private property behind closed doors, Lokodo and police broke in and broke them up.

The Canadian Dignity Network protested on May 17, 2018, when Lokodo disrupted attempts to celebrate the International Day Against Homophobia, Biphobia and Transphobia (IDAHOT or IDAHOBIT):

“To avoid government intervention, today’s gathering took place on the grounds of SMUG’s gated compound behind high walls. Despite this, the country’s notoriously homophobic Minister of Ethics and Integrity, the Honourable Simon Lokodo, ordered police to close the meeting and attendees were given 20 minutes to basically flee or face prosecution.

“Today’s outrageous action by Minister Lokodo is yet another example of the total disregard for the constitutional rights of Ugandans, including the rights to assembly and association found in Chapter 4 Section 29 of the Constitution of the Republic of Uganda. This action also violates international human rights treaties ratified by Uganda, including the International Covenant on Civil and Political Rights and the African Charter on Human and Peoples’ Rights.” 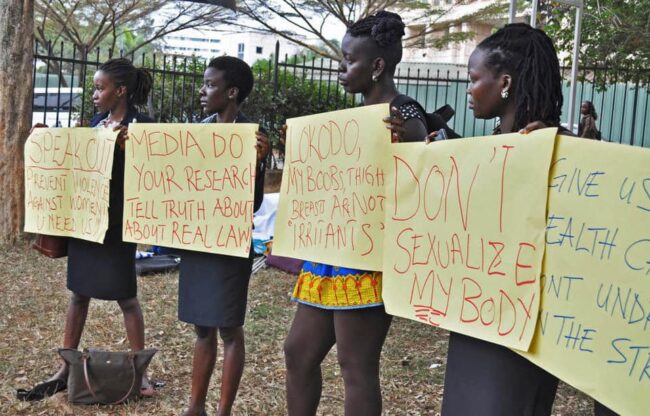 Anti-Lokodo protest in 2014. (Photo courtesy of Stella Nyanzi via Facebook)

In 2019, he worked to reintroduce Uganda’s Anti-Homosexuality Bill, first drafted in 2009 and labeled the “Kill the Gays” Bill. That bill, without the provision calling for execution of homosexuals, had been enacted in 2014, but was overturned that same year on a technicality.

Lokodo lobbied to bring it back.

“Our current penal law is limited. It only criminalises the act. We want it made clear that anyone who is even involved in promotion and recruitment has to be criminalised. Those that do grave acts will be given the death sentence,” he stated.

Lokodo served as Uganda’s Minister of State for Ethics and Integrity from 2011 to June 2021. He was then dropped from the cabinet. He was later appointed to the Uganda Human Rights Commission (UHRC) — an appointment that many in the LGBTQ community considered perverse, considering his unflagging hostility to the human rights of LGBTQ people.

The UHRC announced Lokodo’s death, after which Anita Among, deputy Speaker of Parliament, praised him as “a leader who served with dedication”.

Nyanzi, a strong ally and advocate for the rights of oppressed Ugandans, the LGBTQI+ community, women and girls, rejoiced at Lokodo’s death. She published on Facebook what she titled “A Poem Eulogizing Simon Lokodo”, which also included verbal blasts targeting other anti-LGBTI Ugandans such as Martin Ssempa and David Bahati, as well as Ugandan President Yoweri Museveni:

1. A Ugandan homophobe died today in Geneva.
I join Uganda’s homosexuals to celebrate his death.
Simon Lokodo, from your hatred we’re delivered.
Oh, how hard you campaigned to legalise queer death!
You joined Ssempa preaching hatred to believers.
You enforced Bahati’s homophia with such rage!
There is no sorrow for your demise.
May you rot in hell for your homophobia.

2. A Ugandan misogynist died today in Switzerland.
Uganda’s feminists will dance wildly in our mini-skirts.
Lokodo, you shamed women’s bodies in the motherland.
Alas, how craftily you worked to penalise our exposed bodies!
You championed the Anti-Pornography law in Uganda.
You steered the policing of women’s sensuality and choice.
There is no sorrow for your departure.
May you rot in hell for your misogyny!

We shall dance on the graves of Museveni’s sycophants who oppressed us in the service of Musevenism! Aluta continua… [The battle continues]