Ghana is warned: Passing anti-LGBTQ bill would harm the economy

The economic damage that would be caused by passage of Ghana’s extreme anti-LGBTQ bill  was highlighted at a Parliamentary hearing this week. 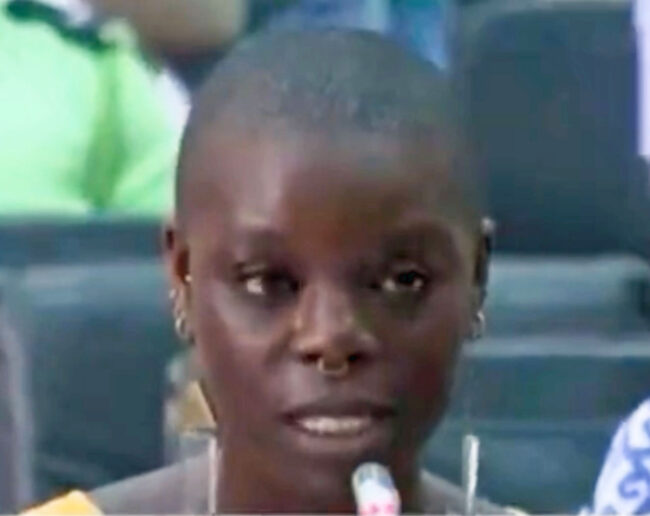 Yvette Tetteh, CEO of Just & Pure Co. Ltd., told the Ghana’s members of parliament: “Discriminating against one group of people — the LGBT members of our family, friendship groups and workspaces — would have a much broader impact on the development opportunities for Ghanaians as a whole.” (Photo courtesy of Rightify Ghana via Twitter)

For months, Ghanaian legislators have been studying the proposal, which would impose harsh new penalties for same-sex intimacy and make advocacy of the human rights of LGBTQ people a crime.

The LGBTQ rights advocacy group Rightify Ghana reported on this week’s testimony before the Parliamentary committee considering the proposal, which is formally titled the “Promotion of Proper Human Sexual Rights and Ghanaian Family Values Bill“:

Passage of the anti-LGBTQ bill would result in the loss of needed support from development partners for large and small Ghanaian enterprises, businesspeople told the committee.

Among them was the Pure and Just Co. Ltd., a food production company supporting farmers with “climate-smart processes”.

Yvette Tetteh, the company’s chief executive, told the committee that passage of the bill would have a broad economic impact, including preventing Ghanaian businesses from gaining access to opportunities in the European Union.

This bill, if passed, “puts at risk our capacity to generate revenue, create employment and add to economic growth,” Tetteh said.

In its presentation to the committee, the Or Foundation Ghana warned that the bill, if enacted, could harm Ghanaian businesses exporting products to the United States.

Currently, such businesses can quality for duty-free access to the U.S. market under the U.S. African Growth and Opportunity Act (AGOA), which was enacted in 2000. To qualify for AGOA’s benefits, a country must protect human rights.  (According to the U.S. President’s Office of the Trade Representative, sub-Saharan African countries eligible for AGOA “must establish or make continual progress toward establishing a market-based economy, the rule of law, political pluralism, and the right to due process.  Additionally, countries must eliminate barriers to U.S. trade and investment, enact policies to reduce poverty, combat corruption and protect human rights.”)

The Or Foundation, a U.S.- and Ghana-registered charity, promotes environmentally and socially conscious fashion and second-hand clothing.

The foundation also shared a statement from a trader at the Kantamanto market community who believes same-sex relations have always existed in Ghana’s culture and that the anti-LGBTQ bill is against Ghanaian values and diversity.

The bill would provide for three to five years in prison for any LGBTQ person or supporter of LGBTQ rights (in the words of the bill, anyone who “holds out as” LGBTQ, as non-binary, or as an LGBTQ ally).

The bill would require citizens to report LGBTQ rights advocacy and homosexual activity to police or other authorities. The bill would  also encourage the harmful and ineffective practice known as “conversion therapy” , which claims to change people’s sexual orientation. It would put the Ministry of Chieftaincy and Religious Affairs in charge of regulating conversion therapy service providers.

For more on the bill’s provisions, read the article “The worst anti-LGBTQ bill ever”.