Amid disputes over same-sex marriage and LGBT clergy, many bishops and archbishops from across the worldwide Anglican Communion are gearing up for the 15th Lambeth Conference, which, after repeated delays, is finally set to take place July 26 to Aug. 8.

The Archbishop of Canterbury, Justin Welby, has written to the conservative Primates of Nigeria, Rwanda and Uganda to tell them that his invitation to bishops from their provinces to attend the Lambeth Conference of Anglican bishops remains open.

In a joint letter sent by Welby and the Secretary General of the Anglican Communion,Josiah Idowu-Fearon,  they said: “God calls us to unity and not to conflict so that the world may know He came from the Father. That is the very purpose of the church globally.”

“Boycotts do not proclaim Christ”, the two Anglican leaders said. “Those who stay away cannot be heard, they will lose influence and the chance of shaping the future. All of us will be the poorer spiritually as a result of your absence.”

Convened by the Archbishop of Canterbury, the conference is an international gathering of bishops to discuss the affairs of the Anglican Communion, which brings together national churches that trace their origins back to the Church of England.

The conference is held at Lambeth Palace, London, as well as Canterbury Cathedral and the University of Kent, also in Canterbury.  Bishops from conservative branches of the Anglican Communion have boycotted the gathering over acceptance of LGBT priests and bishops by churches the United States and Canada.

The theme of the upcoming conference is “God’s Church for God’s World— Walking, Listening and Witnessing Together.” Themes for plenary sessions include mission and evangelism, safe church, life of the Anglican Communion, reconciliation, the environment, Christian unity, interfaith relations and discipleship.

The last Lambeth Conference was in 2008, and the gathering typically takes place roughly every 10 years. This year’s conference was originally set to take place in 2020 before being postponed first to 2021, then 2022 due to the Covid-19 pandemic.

Differences over same-sex marriage continue to loom over Lambeth.

Archbishop Linda Nicholls, primate of the Anglican Church of Canada, said the original delay to 2020 was in part because Welby wanted to encourage as many provinces to participate in Lambeth as possible. 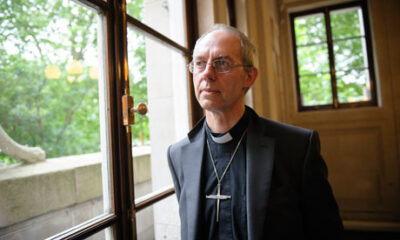 Archbishop of Canterbury Justin Welby is the Anglican Communion’s spiritual head. (Photo courtesy of The Guardian)

“He wanted to visit all the provinces and encourage participation, because of course there’s been some resistance to participation from some parts of the communion if Canada and the United States and others … were going to be there.”

“One of the things that we’ve learned as Anglican bishops is that we have to sit down and talk together,” Nicholls said. “We have to meet together in order to understand one another, and I think that applies to understanding spouses as well.

“I understand that the Archbishop of Canterbury is in a very awkward place because of the very strong views of other parts of the communion, and I would say the majority of the communion. So of course he’s having to walk a fine line between trying to have as many people as possible present at Lambeth and also have the conversations we need to have.”

“I think we lose something by not having that conversation together,” Nicholls added. “But I’m also aware the number of same-sex spouses would be very small and it would be a very difficult meeting for them as well. That’s not to say they shouldn’t be there. I’m just sorry they’re not going to be.”

Many Canadian Anglicans have publicly criticized the exclusion of same-sex couples. The Ontario House of Bishops in 2019 declared support for Kevin Robertson, area bishop of York-Scarborough in the diocese of Toronto, and his husband Mohan Sharma.

Most Canadian bishops and many spouses plan to attend, Nicholls said, but she acknowledged that “some said they’re not prepared to participate [in Lambeth] if Mohan is not invited.”

Karen Luyendyk, a parishioner at St. Paul’s Almonte, a church in the diocese of Ottawa, wrote a letter to Nicholls and Shane Parker, bishop of the diocese, asking them to take a stand against the exclusion of same-sex spouses at the Lambeth Conference.

Describing herself as an “ally to 2SLGBTQIA+ communities, a mom to a lesbian trans daughter and an RN [registered nurse] clinical educator in trans and non-binary health,” Luyendyk said she was disappointed and angry when she read in the Anglican Journal that Welby had expressly excluded two spouses from attending Lambeth

Luyendyk cited, among other things, the creation of all human beings in God’s image. She also pointed to 1 Corinthians, which states that all Christians despite being many are baptized into one body.

“If the body is many, it is also diverse; how do we say we are ‘in Christ’ while at the same time excluding some parts of the body?” Luyendyk asked.

“There will always be people who defend oppressive ways of seeing and being in the world,” she said. “We must make space for them while not allowing their oppressive ideas to become the principles upon which we govern ourselves or our church.”

Welby’s decision not to invite same-sex spouses was first made known in early 2019, in a blog post by Anglican Communion General Secretary Josiah Idowu-Fearon. The invitation process, Idowu-Fearon said, “needed to take account of the Anglican Communion’s position on marriage which is that it is the lifelong union of a man and a woman.” He cited Resolution I.10 of the 1998 Lambeth Conference, which deals with sexuality. 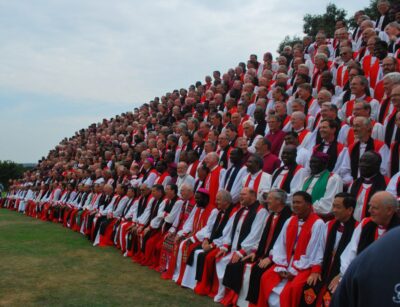 A previous meeting of the Lambeth Conference. (Photo courtesy of acnntv).

Though bishops at past conferences voted on “resolutions,” conversations at this summer’s gathering will see drafts of what are known as “Lambeth calls,” or calls to act or engage in ways related to each of the plenary themes. Because the Lambeth Conference does not have juridical authority, bishops who attend need not implement them in their own jurisdictions.

Nicholls noted that Lambeth is preceded by nearly two years of discussions which then continue afterwards. Since last fall, many bishops have been gathering online for Bible study and discussion. It will be interesting, she said, to see how this relationship-building strengthens the communion.

Source: This is a slightly edited version of an article that first appeared in the Anglican Journal on June 1, 2022.