Cameroon: ‘Get out of this hell’ is gay prisoner’s first goal

“First get out of this hell.” That’s the future that a prisoner at Yaoundé’s Central Prison envisions for himself after spending four years of his life there for homosexuality.

Next he plans to move away from Yaoundé. Then maybe open a restaurant once again.

This is the second of three articles about the three prisoners in Yaoundé, Cameroon, who are serving prison sentences for homosexuality. Under Article 347-bis of Cameroon’s penal code, same-sex intimacy is punishable by a prison sentence of six months to five years. 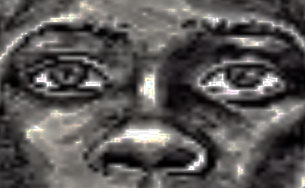 A symbolic image of Oliver, imprisoned since 2014 for violating Cameroon’s law against homosexual activity. Photos are not allowed in Yaoundé’s central prison.

Originally from the Central Cameroon region, he is a large young man with a dark complexion, shy, perceptive and ambitious.

He was trained in the restaurant business at a young age, with financial support from his mother. (That was long before he came out.) Fatherless, he was always strongly influenced by his mother, who pushed him to excel in his education.

From a Christian family, he grew up in fear of God. He went through a very difficult time when he began to realize his sexual orientation. When he came out at age 17, he felt misunderstood, rejected and abused by his family.

He endured that for three years, then left home to settle with his friend, Albert, and open a little restaurant together.

All went well until a homophobic neighbor complained to police. Albert and Olivier were arrested, charged, and convicted of homosexuality.

In four years, Olivier has not seen his family except one prison visit by his mother. He says:

“I feel exhausted. My life has been ruined.

“My dream was to persevere in my business so I could eventually open a great restaurant on my own. Is it still possible? I don’t know.

“Reviving my restaurant would be the best reintegration strategy for me. But I have no funding and no support.

“I will need to find housing because my family will never let me return home.

“For now, first I’d like to get myself out of this hell. Then I will see if I can find a way to settle outside the city of Yaounde. Here the people who know me discriminate against me.”

That’s what remains of the ambitions of a young man whose dream has been broken.