A police officer confronted a cross-dresser last week in northwest Cameroon, insulted him and then bludgeoned him out of frustration when the man held his tongue. 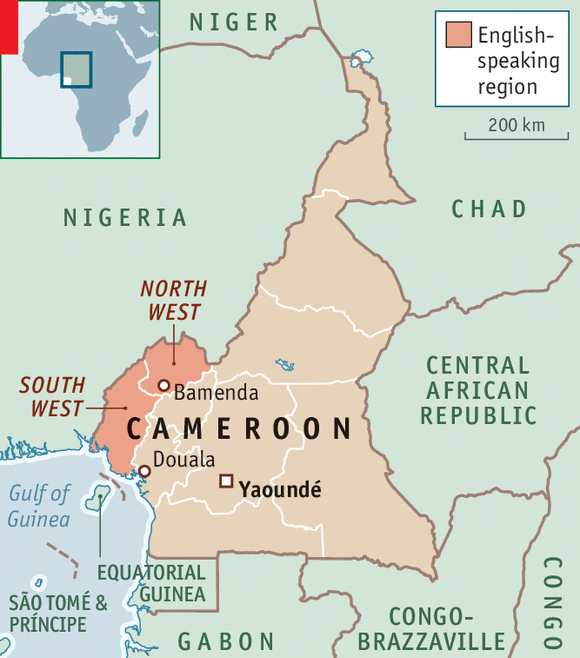 Bamenda is located in the English-speaking northwest region of Cameroon. (Map courtesy of Economist.com)

Mur (a pseudonym) is a 34-year-old resident of Bamenda in the English-speaking northwest region of Cameroon.

he Mur is a merchant an effeminate air,who lives in a popular area of ​​the city.

At around 6 p.m. on Friday, Sept. 21, on his way to a friend’s house, Mur was wearing panties and showing cleavage.

In the middle of the road, he was stopped by a police officer who demanded to see his national identity card, which Mur presented to him. Despite that cooperation, the policeman grew angry and asked Mur why he was dressed like a woman.

Mur did not answer. Aggravated, the policeman asked him if was a faggot. Mur remained silent. The officer slapped him twice, punched him in the face and began beating him with his nightstick.

Mur called for help, but no one came to rescue the local cross-dresser. Blows from the nightstick left him with extensive injuries, including a broken arm, as well as a broken phone.

After the attack, the police officer fled. Mur dragged himself home, where a neighbor found him and escorted him to a health center.He was put into intensive care.

Mur wishes he could file a complaint against the police officer but does not know the man’s name.

In any case, because of the current political crisis in the English–speaking region of Cameroon — strikes, protests, violence and repression — residents of Bamenda do not have access to competent public services.

This account is based on information provided by a defender of children’s rights working for the Denis Miki Foundation in Bamenda.