Barred from playing pro football (soccer) in Cameroon because she is a lesbian, Stenie is worried about her safety as she considers making a formal complaint to the International Federation of Association Football (FIFA). 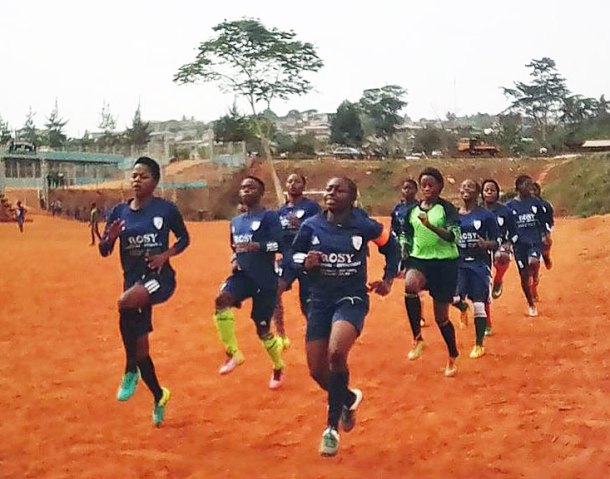 Stenie in the past: Training with her team, Intersport of Yaoundé.

After my decision to allow publication of the story of my expulsion from my Intersport team, despite the absence of any reaction from FIFA, things seemed to go well for a little while. I received supportive communications from users of the Erasing 76 Crimes blog [and of 76 Crimes en français] where the article was published. They encouraged me to file a formal complaint with FIFA.

However, with the help of the organization Defenseurs Sans Frontières, I understood that it would be dangerous to do so, knowing the reactions of Cameroonian authorities to this kind of act. (We have all seen what Cameroonian athlete Thierry Essamba experienced.) 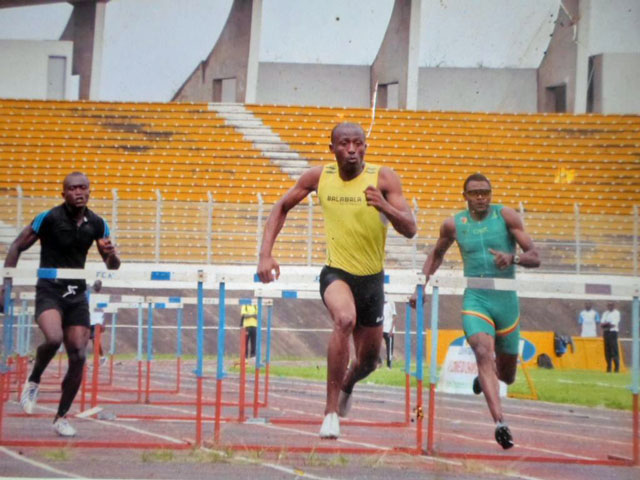 [Essamba, Cameroon’s record holder in the 110-meter hurdles, was suspended from the national track team in 2014 because of rumors that he was homosexual. He was expelled from his family’s home and tried to commit suicide due to depression following a campaign of lies by a close friend who said he was a pedophile. Essamba tried to leave Cameroon to compete but was harassed authorities and blocked in embassies where he sought a visa.] 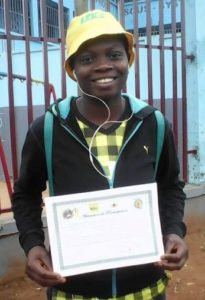 Gay athlete Stenie with her championship certificate from Intersport.

Before I would dare to file a formal complaint with FIFA, I would first need to ensure my safety by leaving the country or by receiving the commitments of the government of Cameroon that would ensure my security — which would be impossible with regard to Cameroonian policies.

Otherwise, I could become the victim of intimidation, surveillance or state-orchestrated violence.

On the evening of Sunday, Jan. 27, I received the phone call from my coach informing me that he had seen what I had shared on the Internet. He vowed to put an end to my career and make my life difficult if I continued to publish information about him. “Football is not for homosexuals,” he said.

So I contacted Defenders Without Borders again. They tried unsuccessfully to arrange for mediation with the coach.

For two weeks now, I have been homeless for financial reasons. Having no income to pay for my lease, I had to give up my home. I am currently living with a friend who has agreed to host me for a while. Negotiations are already under way with CAMFAIDS [the LGBTI advocacy group Cameroonian Foundation for AIDS] for a place at their shelter.

I am psychologically depressed and spend all my days lying down and weak. I cannot find a solution to this problem on my own, so please help me!

If you can help Stenie financially or otherwise, contact Steeves Winner at [email protected]

The advocacy network Fare (formerly Football Against Racism in Europe) has offered to help Stenie if she files a formal complaint with FIFA.