Uganda: Officials disagree on need for a new anti-gay bill

Ugandan officials are divided over whether to bother introducing a new Anti-Homosexuality Bill.

James Nsaba Buturo, a conservative evangelical Christian member of the Ugandan Parliament who took time off in August to draft a new Anti-Homosexuality Bill, has said the public should be “on standby” to support his new bill.

Asked when he expects the bill to be ready for tabling (for being formally introduced) in Parliament, he said: “Soon. We shall inform you.”

“Government hereby clarifies that it does not intend to introduce any new law with regards to the regulation of LGBT activities in Uganda because the current provisions in the Penal Code are sufficient.” 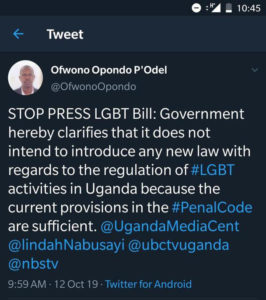 NRM spokesperson Ofwono Opondo tweeted that the Ugandan government does not plan to introduce an anti-homosexuality bill.

In the nation’s Penal Code, dating back to 1950, “carnal knowledge of any person against the order of nature” is punishable by life imprisonment (Section 145) while “gross indecency” in public or in private is punishable by a seven-year prison sentence (Section 148). Those provisions have not been recently enforced.

Buturo told Erasing 76 Crimes this evening in Kampala that he is not aware that his party, the NRM, is not supporting his bill.

“No one has told me anything contrary. Wait for the bill,” he said.

Asked whether he would defy his party’s position as communicated by its spokesperson, he said no one has told him about his party not supporting a new bill.

“I am not aware of that position,” Buturo added.

Frank Tumwebaze, the official government spokesperson and Minister for Information and Communications Technology, could not be reached for a comment.

Some observers believe that the ruling NRM party is unlikely to obstruct anti-gay efforts backed by First Lady Janet Museveni.

Buturo’s planned anti-gay bill has bipartisan supporters. Some members from both the NRM and from the opposition appear to support such a bill, although except for Ofwono Opondo’s tweet no party has yet issued a position statement.

Buturo’s plan to introduce renewed anti-homosexuality legislation as a private member’s bill means that it could not easily be stopped by a cabinet decision. 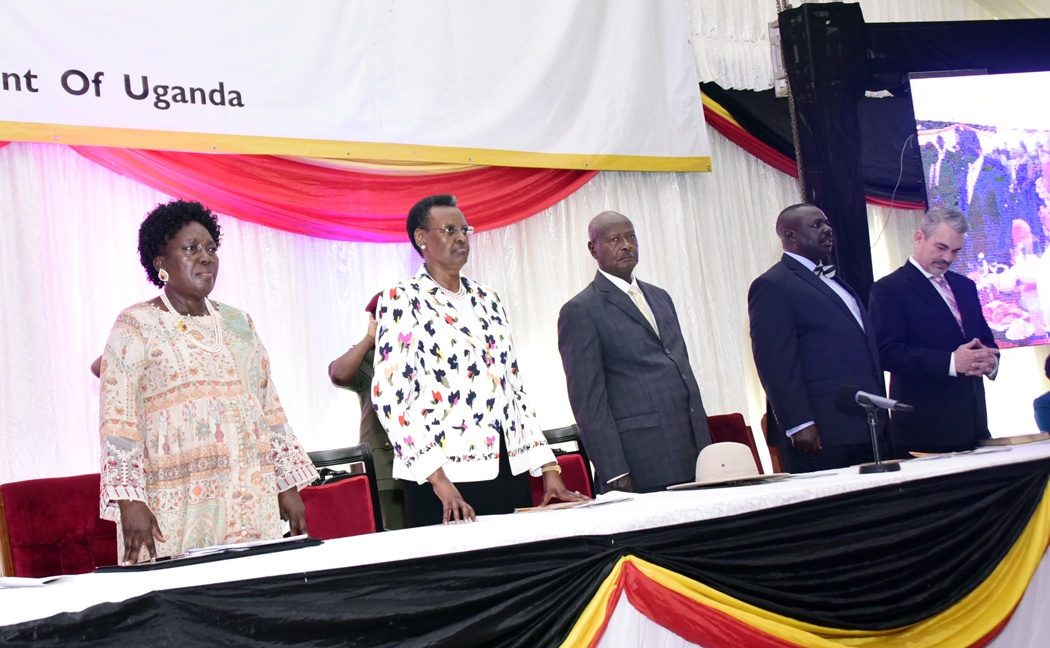 After MP David Bahati, the author of the now-annulled anti-gay law of 2014, was named state minister for finance, that slowed his anti-gay initatives because as a minister he is now bound by Cabinet decisions, which had not applied when he was a private legislator.

Buturo was the Minister of State for Ethics & Integrity in the Office of the Vice President in the Cabinet of Uganda from 1 June 2006 until his resignation on 15 March 2011.

In the cabinet reshuffle of 27 May 2011, his docket was assigned to Father Simon Lokodo, Both men are homophobic.

He was very influential in the process of enacting the 2014 anti-gay law. 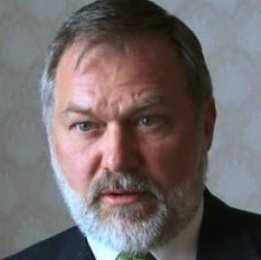 Buturo is generally perceived to be close to Uganda’s evangelical born-again Christian First Lady, Janet Museveni, a backer of the 2014 annulled anti-gay law. Buturo was also close to American pastor Scott Lively, another backer of that law. Mrs. Museveni has been close to homophobic pastors in the past, including Pastor Martin Ssempa. Ssempa is notorious for showing gay pornography in churches and declaring that gay men “eat the poo poo.”

Working with a vast network of Ugandan born-again anti-gay Christians, Lively derailed Uganda’s achievements in fighting HIV/AIDS by claiming that people who are HIV-positive are morally bankrupt. In the years after he launched his anti-LGBT campaign, the level of HIV infections in Uganda, which had been dropping, began to rise once again.

Lively’s influence was spread by Ssempa, who was later convicted by a Ugandan court on charges stemming from his smear campaign against fellow pastors who did not believe in his anti-homosexual agenda and his calls for excluding LGBT people from health care. Ssempa has been in hiding since a U.S. judge ordered him to appear in court along with Lively in a case filed in a U.S. federal court by the LGBT rights coalition Sexual Minorities Uganda (SMUG). See the court’s judgment here. 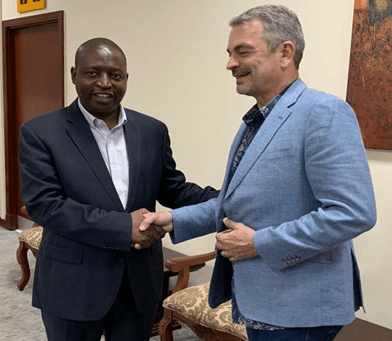 Erasing 76 Crimes has also learned that Atlanta-based U.S. evangelical Pastor Johnny Enlow met with associates of Buturo recently in Kampala. Enlow is a homophobic Christian evangelist who attended this week’s national prayer event in Kampala in the company of First Lady Janet Museveni. The prayers coincide with national celebrations of Uganda’s independence every Oct. 9.

Enlow said in a 2009 statement to psychology professor Warren Throckmorton that anti-gay laws are needed “not to bring punishment to homosexuals but rather to inform society of right and wrong.”

“I would be against harsh punishments against homosexual activity between consenting adults and would not endorse capital punishment for this scenario,” he said in the statement.

“It would not be defensible to execute homosexuals anymore than it would be to execute rebellious children — which is espoused to some measure in Leviticus. There is a greater grace assigned to the new covenant understanding of the New Testament. Rebellious children are still wrong in their rebellion and homosexuals are still wrong in their behavior but we do not need the extreme punishments of the Old Testament.”

See his full comments from the 2009 statement below:

“I do believe that the practice of homosexuality is a sin. It is not part of God’s original design. We don’t even need to quote specific scriptures of the Bible to validate this, as nature itself reveals the self-evident truth that homosexuality is an aberrant manifestation of original intended sexuality.

Having said that, I do not believe that most homosexual feelings are chosen – though all homosexual practice is in fact chosen. Homosexual feelings are an aberration of normality brought on by a number of aggravating realities such as rejection, sexual abuse etc. The practice itself is a significant sin that reaps its own judgment or consequences- such as all sins do. Therefore as a rule God doesn’t have to release a “sword of judgment” on it or other sins. Sin begets its own reward.

However when there is an aggressive promotional agenda connected to a sin behavior such as homosexuality it can come to the place where it elicits a unique response of God that is beyond the normal reaping of consequences. The Biblical story of Sodom and Gomorrah is such an example with a city so aggressive in this sin that the ground itself cried out for a judgment.

As to the question of whether governments should criminalize homosexuality as part of taking the mountain of government- this would only be a second best method of bringing awareness that the behavior of homosexuality is wrong. This becomes a necessity only when the moral fiber of society has become so degraded that society itself is in need of knowing right and wrong.

For me, the point of criminalizing homosexuality is not to bring punishment to homosexuals but rather to inform society of right and wrong. I would be against harsh punishments against homosexual activity between consenting adults and would not endorse capital punishment for this scenario. Society does need to know that homosexual behavior is wrong but it would not be defensible to execute homosexuals anymore than it would be to execute rebellious children- which is espoused to some measure in Leviticus.

I personally believe that most who suffer from homosexual feelings are worthy of great compassion because as a rule it tells us they have suffered some significant traumas in their lives. It would not express the heart of God towards them for there to be government-sponsored “witch hunts” against them.

Our fractured homes and fractured society greatly contribute to the presence of homosexual realities and individuals who manifest the marks of societal decay cannot be made to pay the full price for a greater societal ill. They are responsible for personal choices but there must be margin for compassion when fully understanding the causal effects. The in-your-face activist homosexual agenda is of course generating its own strong repercussions and backlashes and to the degree that they insist on forcing upon society their aberrations to that degree they will see increasing measures to limit their activism of a sin behavior.”