In a rare change of heart among Ugandan evangelical Christian leaders, prominent Pastor Michael Kyazze has publicly apologised to his fellow pastor, Robert Kayanja, for taking part in a nasty homophobic smear that shook evangelical faithfuls ten years ago.

Ugandan pastors Michael Kyazze (left) of the Omega Healing Centre in Zana and Robert Kayanja of the Miracle Centre Cathedral in Rubaga.

Church leaders in Uganda have lauded Pastor Michael Kyazze’s apology to Pastor Robert Kayanja, saying this is an example that ought to be emulated by every follower of Christ in the country.

Uganda Christian News is reporting that Pastor Kyazze recently took to social media to apologize to Pastor Kayanja and his family for his role in the court case in which youths accused the Rubaga Miracle Centre Cathedral founder of sodomy.

Pastor Kyazze of the Omega Healing Center stated that every action he took relating to Pastor Kayanja in 2010 was in line with and in response to those who voluntarily approached him for personal ministry.`

“I do not hold a personal vendetta against Pastor Kayanja,” he said. 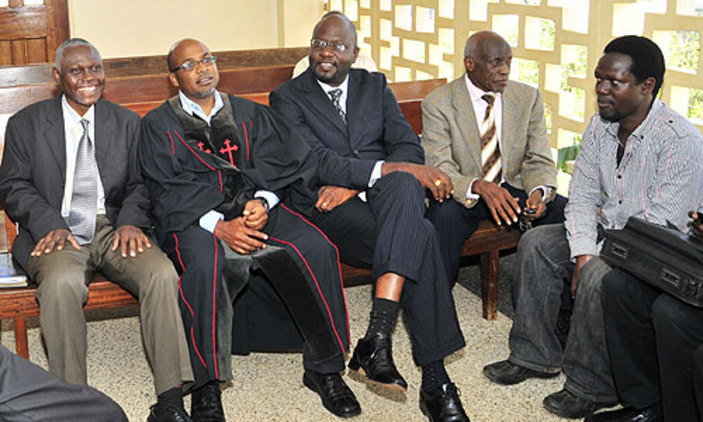 Convicted: pastors Solomon Male, Martin Ssempa, Michael Kyazze and their aides at Buganda Road court during the trial that ended in their conviction on charges of conspiring to injure Kayanja’s reputation.

As evangelical pastors vied for prominence, the fabricated accusations were apparently an attempt to injure Pastor Robert Kayanja’s reputation by associating him with homosexual acts.

In 2011, pastors Martin Ssempa, Solomon Male and Michael Kyazze; their lawyers, Henry Ddungu and David Kaggwa; their agent, David Mukalazi; and a State House employee, Deborah Anitah Kyomuhendo, were tried and convicted on charges of conspiring to injure Kayanja’s reputation.

In court testimony, an orphan choir member at Kayanja’s upmarket Church, the Miracle Centre Cathedral with a sitting capacity then of 10,000 people, said he was told that the sodomy accusations against Kayanja were supported by “big people” in government.

An earlier court hearing named State House employee Kyomuhendo as being “sent” to organise the smear with Mukalazi. Two witnesses said they were offered 50 million Ugandan shillings (US$19,000 then) to tell the police that Kayanja had sodomised them.

One accusation had been that a boy was sodomised after a music competition in 2009 at Kayanja’s church. After his choir won the competition, Kayanja supposedly drove him in a car with tinted windows to an unidentified Kampala hotel under the guise of congratulating him. Instead, in the fabricated account, Kayanja sodomised him, then called a medical doctor to stitch up his anus and to declare him insane and put him in Kampiringisa Health Centre for a month.

“It is in that spirit and after prayerful consideration that I have decided to write an apology to the entire body of Christ for the inconvenience I, or the evil perceived of me, may have caused in the execution of my pastoral duties,” he added.

Pastor Kayanja, right, on the day he appeared in court to defend himself in 2011

“At the recent Kabaka’s Christmas function in Bulange, I had an opportunity to meet Pastor Kayanja after a considerable number of years. A surge of petty and futility overtook me, as I saw a vulnerable mortal man just like all of us. Those who know me well know that I am quite emotional and I am often driven into action by compassion.”

Kyazze said his desire is to let go of the past, and “allow God full space” this new year and beyond. He expressed forgiveness to every individual that played a part in the highly contentious case.

“As a born-again Christian for the last 34 years, I sincerely know better what to do and what not to do. I forgive every individual and party which played a part in the rift and all lies and other vices that were employed to aggravate the already septic situation. I want to “kick this off my plane!” I want to allow God full space in this issue that none may perish,” he said.

“I also realize there are people nursing a grudge against Pastor Kayanja on my behalf. I beg for a ceasefire in Jesus’ name, because I hold none myself. (Matthew 22:37, Roman 12:19),” he added.

“Your apology to Pastor Robert Kayanja has blessed me personally, and the entire body of Christ. It takes maturity to be a great example,” Dr Franklin Mondo Mugisha of Empowerment Christian Prayer Center International told Pastor Michael Kyazze.

Pastor Cindy Kiganda of Christianity Focus Ministries remarked: “This is a sign of maturity. God bless you Bishop Michael Kyazze and your family. What a way of ending a year. God is extremely good.”

In her submission on this development, Pastor Susan Nsibirwa of Mavuno Church Kampala said the ministry of reconciliation is so powerful, “it is at the heart of God our Father.”

Pastor Abed Bwanika commented: “I love the way you chose to close 2019. I salute you and am forever grateful to God for the gift in you.”

“That is what we need in the body of Christ. … How I pray that all others learn from you and apologize to each other so that together we can build the body of Christ,” Pastor Joel Walusimbi of Faith Heritage Ministries said.

Evangelist John Opio stated, “Brethren, though we may be weak but we are strong in Jesus Christ the Holy Son of God. Pastor Robert Kayanja is a man of God, He and Michael Kyazze and others are the pioneers and they have kept on with the work of God up to this present age. Let us lift them up in prayers so that the unity stands strong, unshakable and to last until Jesus returns to take us home.”