In a case likely to test the limits of tolerance of same-sex intimacy among Ugandan Muslims, an Islamic religious leader has been suspended from all his clerical duties for marrying a fellow man “unknowingly.”

A Muslim leader calling for death penalty on Ugandan homosexuals in 2009 at the height of the debate over the “Kill the Gays” bill, which was later amended, passed as the Anti-Homosexuality Act of 2014 and then overturned in court.

Local media is reporting that Sheikh Mohammed Mutumba, an imam at Kyampisi Masjid Noor mosque in Kayunga District, about an hour’s drive from Kampala, Uganda’s capital, has been suspended from his clerical work after unknowingly wedding a fellow man in an Islamic ceremony and marriage contract (nikah).

Sheikh Mohammed Mutumba, right, with his “wife” at their wedding. (Photo courtesy of the Daily Monitor)

In the wedding, which occurred a fortnight ago, Sheikh Mutumba unknowingly wedded a fellow man with the feminine name “Swabullah Nabukeera” and spent two weeks with his new “wife” unaware of the latter’s true gender.

The truth came out later, after police arrested “Nabukeera” on charges of theft. A neighbour alleged that Mutumba’s newly wed “wife” jumped over a wall and stole clothes and a television set. Mutumba rented a room in a two-room house where he had been staying with “Nabukeera”. The wall that separates the two rental rooms does not reach the roof.

The neighbor reported a case of theft at Kayunga Police Station before detectives were dispatched to arrest “Ms Nabukeera”.

Kayunga District criminal investigations officer Isaac Mugera said when “Ms Nabukeera” reached the police station she was wearing a hijab and sandals. During a body search by a female police officer before being taken to the cells, it was discovered that the suspect was actually a man. He revealed to police that his real name is Richard Tumushabe.

“We have charged him with impersonation, theft and obtaining goods by false pretence,” the CID boss said.

Amisi Kibunga, a leader at the Kyampisi mosque, said he saw Sheikh Mutumba’s “wife” on two occasions at Juma prayers but did not realize that he was a man. 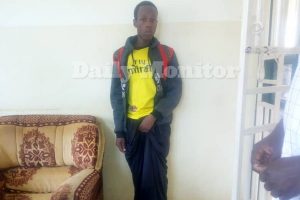 Richard Tumushabe, 27, who had disguised himself as a woman, at Kayunga Police Station after his arrest. (Photo courtesy of Daily Monitor)

“He had a sweet soft voice and walked like a woman. She also always dressed in either gomesi (local traditional female dress) or hijab,” Kibunga explained.

“Four days after their wedding, the bridegroom came to me complaining that the “bride” had refused to undress while they slept. Actually I was planning to go to their home to counsel “her” when I heard that the bride had been arrested in connection with theft of a television set and clothes of their neighbour,” Kibunga said.

“The ‘bride’ did all the house chores such as cooking, washing clothes and others while the husband was away but it was not easy to know he was just masquerading as a woman,” said Henry Mukwaya, a neighbour.

“He always wore gomesi or hijab and spoke like a woman but she kept indoors most of the time,” he added.

The regional Islamic magistrate (or qadi/kadhi), Sheikh Abdul Noor Kakande, under whose jurisdiction Sheikh Mutumba served, told local media that Sheikh Mutumba, 27, was under investigation over the “unfortunate” incident.

Sheikh Isa Busuulwa, the head imam of the Kyampisi mosque, said the suspension was intended to preserve the integrity of their faith.

“He has been one of the three Imams of the mosque. He had spent about four years preaching in this mosque on top of teaching Islam to children,” Sheikh Busuulwa said.

Busuulwa told the Daily Monitor newspaper that although he attended Sheikh Mutumba’s wedding reception at his grandmother’s home in Kyampisi Trading Centre, the mosque leadership did not take part in the wedding preparations.

Sheikh Mohammed Ssemambo, the chairperson of Namagabi Muslim County, expressed shock over the incident. “I learnt about the incident. As a Muslim leader, he should have followed what the Koran says when one wants to get a spouse,” Sheikh Ssemambo said.

Local media is reporting that neighbors living near Sheikh Mutumba’s rented home said they had not seen him in four days. He was reportedly taken in by a relative for counselling.

“He is too devastated by the incident and needs counselling,” a source said.

Same-sex marriages are condemned by Ugandan laws. Muslim leaders, including the top cleric Sheikh Ramadhan Mubajje. He has on several occasions called for stiff punishments against same-sex relationships, including exiling all gay people in an island in Lake Victoria for them to live their “evil life style.”

Kikonyogo Kivumbi, the author of this article, is the executive director of the Uganda Health and Science Press Association