Stigma against HIV+ homosexuals and sex workers in Uganda is almost six times greater than stigma faced by HIV+ Ugandans in general, a new survey found. 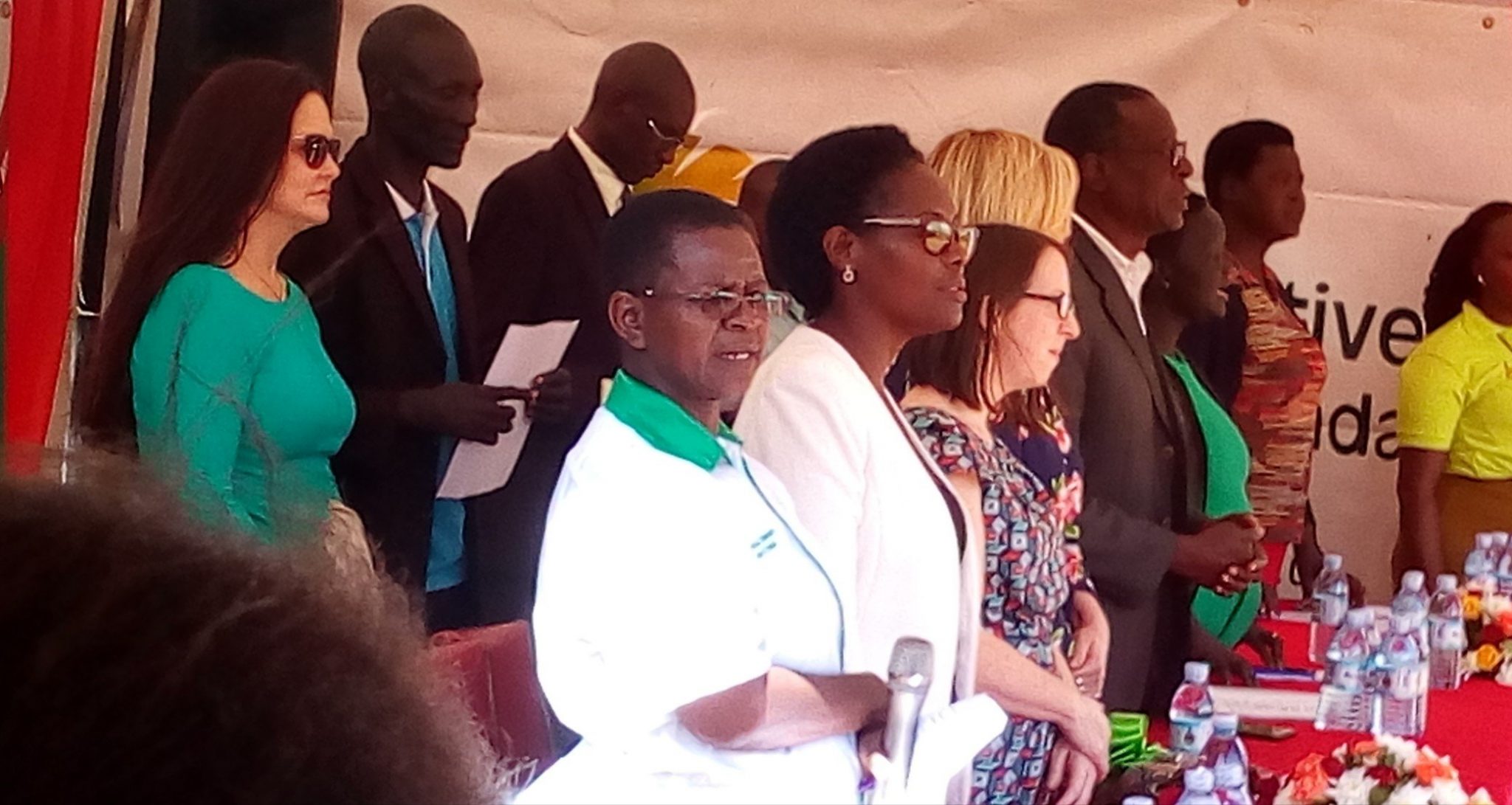 Stella Kentusi, executive director of NAFOPHANU (first from left in white t-shirt) at the launch of the report flanked by other dignitaries. (UhspaUganda photo) 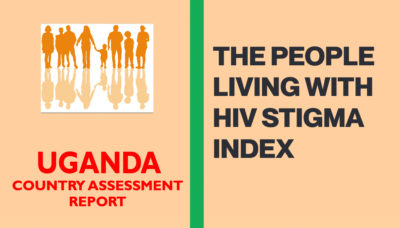 Cover of The People Living With HIV Stigma Index report

In the general population, stigma facing people living with HIV has fallen in the last six years, according to the new 2019 HIV stigma index report for Uganda, with exclusion from social gatherings and family activities reported by fewer than 5% of respondents.

But stigma still confronts sexual minorities, whether they are HIV+ or not. Stigma and discrimination unrelated to HIV status is almost six times higher than HIV-related stigma, according to the report.

That report, the Uganda country assessment report of the People Living with HIV Stigma Index, is based on surveys of 1,398 Ugandans.

The survey also found that people living with HIV (PLHIV) feel less shame about their HIV+ status — a reduction from 50% in 2013 to 24% in the current report.

But 13% said they had been blackmailed about their HIV+ status in the last 12 months. Eight per cent said they had lost a source of income.

More than a quarter of the respondents reported having their HIV+ status revealed without their consent to family, community or religious leaders, neighbors and friends. One 32-year-old man called “Joseph” (a pseudonym like all the names in the report) told the surveyors:

“I was home relaxing and my wife came back very furious on why I had kept my status a secret. I was still buying time to tell her since I did not have the courage on my own. She broke down and revealed to me that our neighbor had told her since we pick ARVs from the same health centre. Fortunately she did not leave but it took us time to stabilize our relationship.”

People’s experience in disclosing their HIV+ status was generally positive, the report stated. For example:

Flavvy (22) a university student, “I had feared to disclose my status to fellow students thinking they would stigmatise me. When I did, I was overwhelmed by the support I received that my CD4 went high and I virally suppressed because one of the students became my treatment buddy. Her daily reminders made me adhere to my medication.”

Joshua (37) from Mityana, “After exclusion from a village yam growing project in 2013, I decided to reexamine the pros and cons of disclosing my HIV status. In the process I have had to painfully forego some opportunities. It all started after spending long hours at the ART clinic. and when I tried to explain myself to the Project Manager, he (the Project Manager) turned a deaf ear and I was sacked.”

Among transgender respondents, 25% of trans women and 24% of trans men said that in the past 12 months they had “Challenged or educated someone who was engaging in stigma or discrimination against you.” 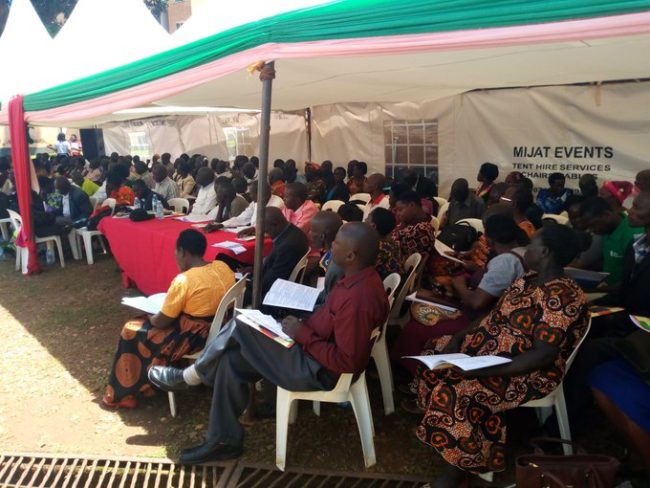 Audience listens to the launch of the People Living with HIV Stigma Index report. (UhspaUganda photo)

Discriminatory remarks or gossip unrelated to HIV were the most common stigma experience reported by every category of most-at-risk respondents. It was reported by 34% of transgender respondents, 24% of men who have sex with men (MSM), 17% of those who labeled themselves “gay/homosexual”, 38% of those labeled “gay/lesbian”, 29% of sex workers and 29% of injectable drug users. About 18% of trans people were excluded from family events. For example:

Maco (29) “My family disowned because I transgendered. They do not care if I am HIV positive but continue to make discriminatory remarks over my orientation. My big brother threatened to beat me up if I showed up in our father’s compound.”

Similar discrimination from their families within the past 12 months were reported by 11% of “gay/homosexual” respondents, 15% of MSM, 27% of lesbians, 14% of sex workers and 20% of drug users.

The report stated that an effective response to the HIV epidemic will require “tackling the root causes of stigma and ensuring that services are inclusive and accessible. This can be done by empowering People Living with HIV [PLHIV] to understand their rights and act on violations, address fears and change attitudes, include Key Populations [KP] in health-care programming, protect PLHIV from discrimination laws and have stigma and discrimination reduction as a goal in national strategies.”

The report was unveiled recently by the National Forum of People Living with HIV/AIDS Networks in Uganda (NAFOPHANU), supported by the Irish government.

The report is one of the most comprehensive stigma assessments, surveying homosexuals, sex workers, injecting drug users about their access to health-care services and the challenges they face.

It is Uganda’s second national PLHIV Stigma Index survey. The first was published in 2013.

Of the total of 1,398 respondents, two-thirds were women and one-third were men. Of those in intimate relationships, 63% reported that their partners were also HIV positive, 21% said their partners were not, and 14% were unsure of the partner’s status.

Among all participants, 54% belonged to a People Living with HIV network and 20% belonged to a KP category (sex workers, People Who Use and/or Inject Drugs, gay, transgender and MSM).

Ms Nicole McHug, the head of cooperation at the Embassy of Ireland in Kampala, said at the report launch that there is strong need to invest in national awareness campaigns to reduce the number of people suffering HIV/Aids-related stigma. She said stigma still keeps some people off health care, especially vulnerable populations.

Uganda’s LGBTI community has repeatedly reached out for support fighting stigma and discrimination in access to health care. The rate of HIV and STI infections among key populations is still high according to the current Crane Survey Report launched last year.

A ministerial directive on non discrimination in access to health care is in place to guide health care providers not to turn away their clients due to any considerations including sexual orientation, gender identity and or expression