The LGBTI advocacy group Camfaids has secured funding and a site to reopen its shelter for victims of anti-LGBTI violence and discrimination. 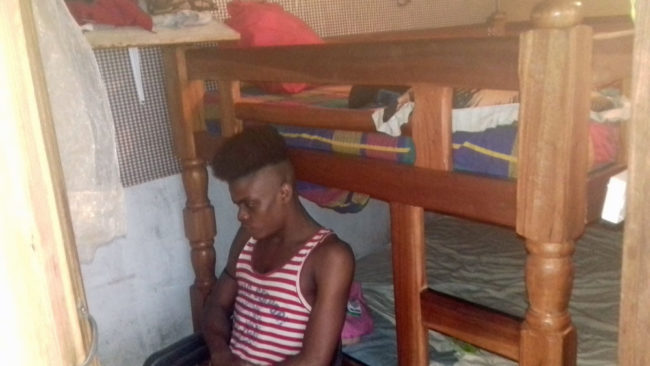 A moment of reflection in the previous Camfaids shelter. (Photo by Jacks Oke used with permission of the photo subject.)

The shelter closed in early November 2019 because of funding problems and because the landlord planned to sign a lease with new tenants.

Camfaids (the Cameroonian Foundation for AIDS) searched for a new site and contacted national and international financial supporters.

In the end, the needed finances came through shelter’s longtime supporters, the Swiss organization Lawyers Without Borders (Avocats sans frontieres), which has arranged for continued funding from the city of Geneva.

Now Camfaids has rented a large, secure house that can serve as a shelter for LGBTI people in need in Yaoundé, the capital of Cameroon,

Starting in early 2017, the shelter served LGBTI victims of family rejection and violence based on their sexual orientation or gender identity. It has sheltered about 100 people, including some living with HIV-AIDS who received comprehensive medical care. Through the site, Camfaids provided a bed, psycho-social counseling, food, medical care, support with social reintegration, encouragement/empowerment and training in income-generating activities.

Those services were limited after the shelter closed in early November.

According to one previous resident of the shelter:

“You have to live in this environment to know the importance of this place in the life of LGBTI people, especially in times of distress. This project is very beneficial for us. “

For the moment, no official opening date has been set.

Courtney Stans, the author of this article, is a journalist living in Cameroon. She writes under a pseudonym. Contact her at [email protected]